A loss of $1.1 billion and revenue of $803 million were reported in cryptocurrency company, Coinbase's second-quarter earnings, which were below the company's first-quarter results and analyst projections.

Coinbase, which made enormous gains after going public last year, has struggled to retain momentum throughout the most recent "crypto winter."

“We continue to take a long-term view and remain focused on building for the future. Q2 was a test of durability for crypto companies and a complex quarter overall.

The fact that Coinbase had about 9 million active users who were transacting appeared to be a relative bright spot.

Here is a more detailed analysis of Coinbase's most recent results: 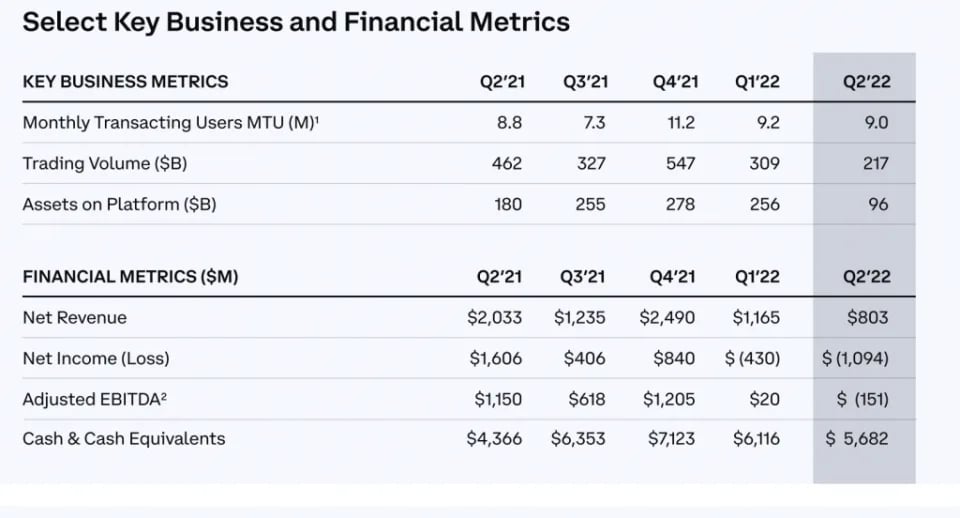 Coinbase's CFO stated on an investor conference call that the company's $1.1 billion loss was largely caused by accounting regulations that require it to record an impairment loss when the price of cryptocurrencies declines but not a gain when prices climb.

The true loss was therefore closer to $640 million.

Both retail and institutional trading revenue for the company declined substantially, and its custody and services businesses—both crucial to Coinbase—also struggled.

The only sector that saw growth was when interest income increased: 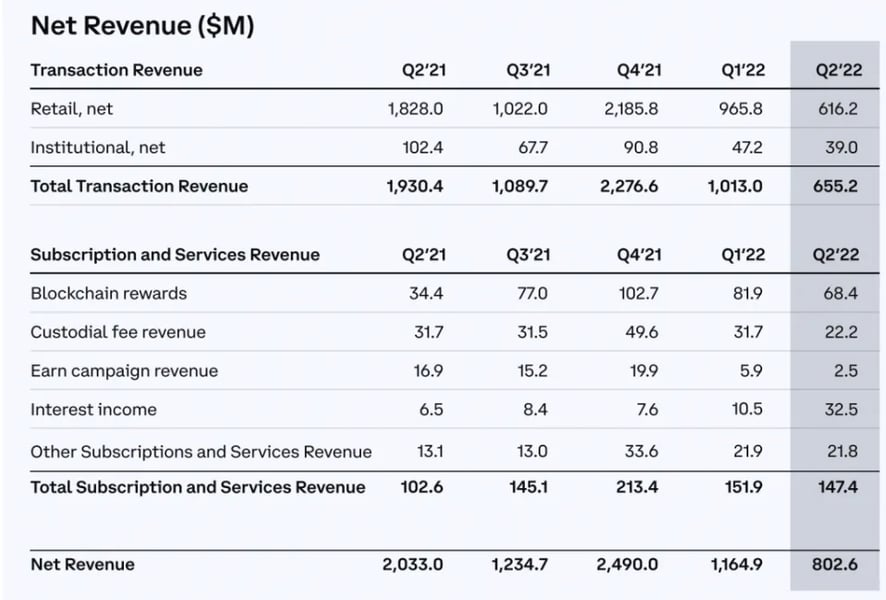 The company's earnings disaster comes as it struggles to deal with the crypto market's general decline and reassure uneasy investors following a recent revelation that the SEC is looking into Coinbase for improperly listing securities.

When the Justice Department revealed that a former product manager had been detained for insider trading last month, Coinbase also experienced a hit to its reputation.

CEO Brian Armstrong stated in June that Coinbase would fire more than 1,100 workers, or around 18% of its workforce, as a result of weaker-than-anticipated growth.

However, the company did receive some positive news earlier this month when it announced a partnership with financial powerhouse BlackRock.

This move would make it simpler for corporations to retain cryptocurrency, and it caused Coinbase's share price to increase by more than 20%.

Armstrong emphasised Coinbase's updated wallet product and its new derivatives platform as areas for the company's future growth during the investor call.

However, during the call, one analyst questioned why Coinbase hadn't taken more steps to pursue acquisitions during the current downturn like its rivals—an apparent allusion to exchange behemoth FTX's acquisition of shares in businesses like BlockFi and Robinhood.

According to Coinbase COO Emilie Choi, the business has made similar acquisitions during prior downturns and hopes to do so once more in the near future.

As of Tuesday afternoon, the price of Coinbase shares was around $87, down almost 10%. They decreased closer to $83 in after-hours trading.