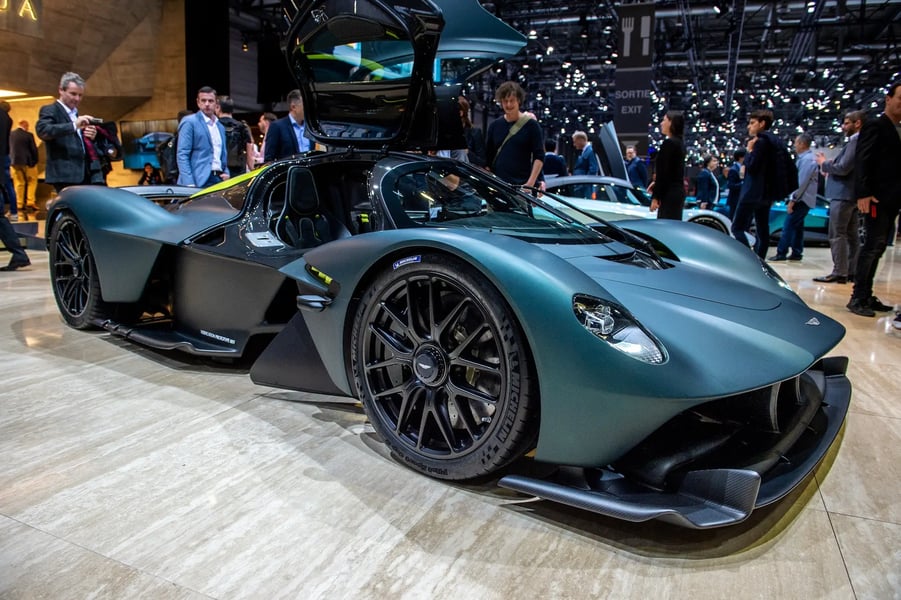 The world's top hypercars and fastest supercars are so much more than just vehicles for getting around.

These moving works of art capture the priorities of the one per cent of the wealthiest, where flamboyance and swagger rule the day above efficiency and pragmatism.

A select group of automakers, including Rolls-Royce, Bugatti, Ferrari, Koenigsegg, Lamborghini, Mercedes-Maybach and Pagani, have established themselves as the leaders in the supercar and hypercar market by offering their wealthiest customers access to the fastest, most exclusive, beautiful, and, in this case, most expensive automobiles on the planet. 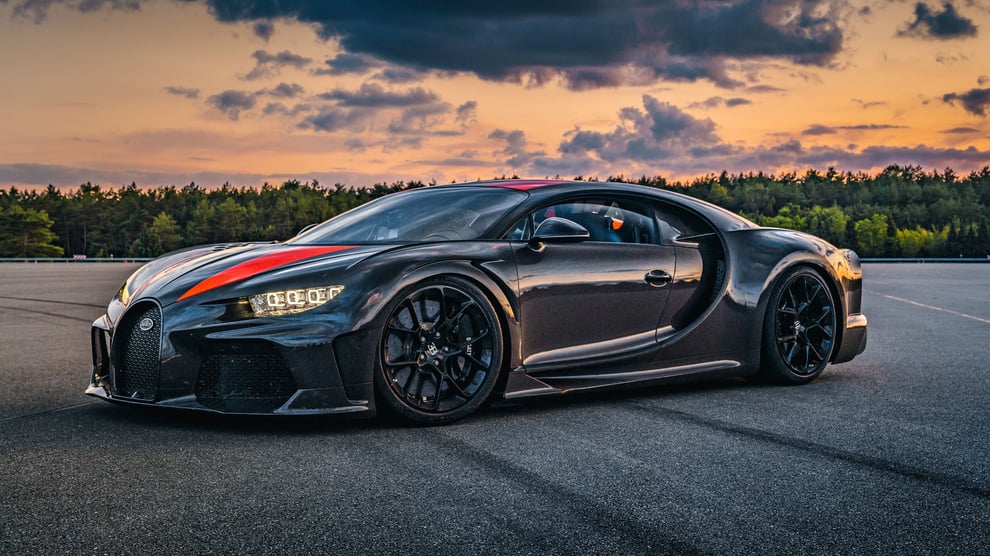 Bugatti proudly introduces the Chiron Super Sport 300+ in 2019 to commemorate the amazing record-breaking performance that broke the mystical barrier of 300 miles (482,80 kilometres) per hour for the first time.

This extremely limited edition of the Chiron, which is only available in 30 units, is both stylistically and mechanically inspired by the record-breaking vehicle.

Some of the quickest, most potent, and most expensive production super sports vehicles in Bugatti history may be found in the Chiron line.

Such exceptional cars demand accessories that match their gorgeous design and high level of technology.

For a performance at exceptionally high speeds, the Chiron Super Sport 300+ bodywork has been stretched and aerodynamically improved.

Even at speeds over 420 km/h, performance and stability are improved by the ideal balance between low drag and downforce. 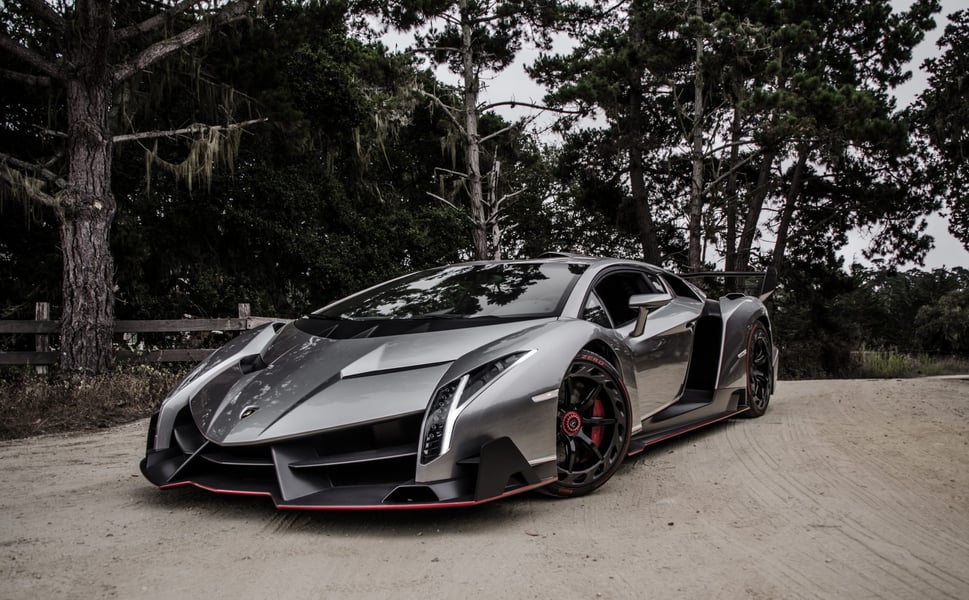 The Lamborghini Veneno continuously strives for optimal aerodynamics and cornering stability to give the vehicle the dynamic, authentic sensation of a racing prototype while remaining completely certified for the road.

The Veneno guarantees performance that is nothing short of mind-blowing with a power-to-weight ratio of 1.93 kg/hp (4.23 CV/lbs) and a potent twelve-cylinder.

The carbon fibre frame's lightweight construction is both readily apparent and verified by the scales.

In addition to pushing the boundaries of racing, Lamborghini celebrated the 50th anniversary of its creation (1963) with the Veneno and Veneno Roadster. Only 14 Venenos, based on the Aventador, were made by Lamborghini in 2014 and 2015.

The following details the new Veneno's technical specifications: With its cutting-edge design and aeronautical inspiration, this Lamborghini concept car, which has a 6.5 litre aspirated V12 engine and a top speed of 355 km/h, may offer you the unimaginable sense of flying on the road.

With extreme proportions that fluctuate between razor-sharp lines and sleek, tight surfaces, the Veneno, which is authentic to the Lamborghini lines, stands out.

This is especially true of the forceful, arrow-shaped front. About $4.5 million was spent on each. 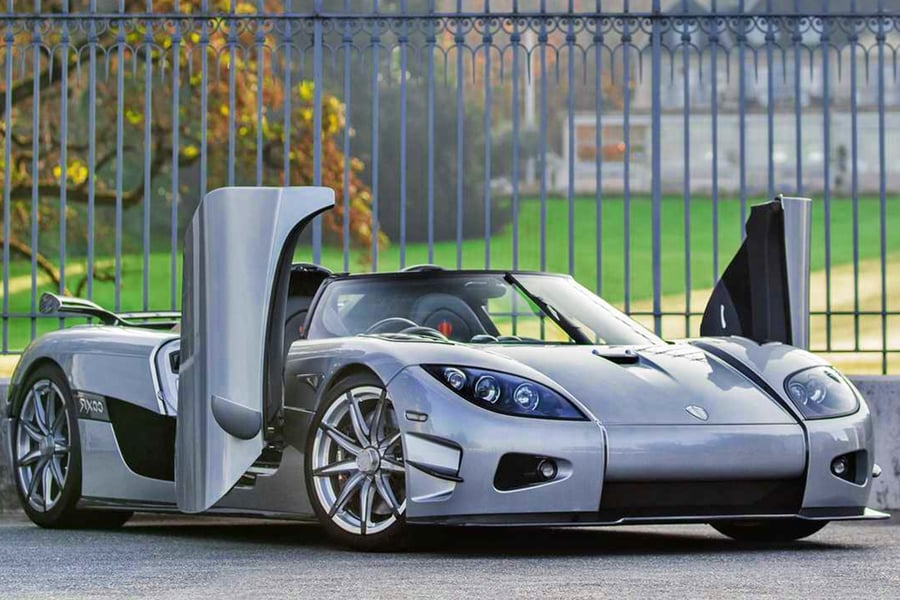 The Swedish word "Trevita," which means "three whites," alludes to the special paint job on this and its twin.

The Koenigsegg CCXR Trevita is a one-of-a-kind luxury car created from a fibre that was originally coated in black but has been changed into a gleaming, silvery-white material.

It's a result of employing white diamond carbon fibre, which was a very challenging and time-consuming technique, to build the body panels.

It produces extra power to boost acceleration thanks to the 4.7 L twin-supercharger 8V engine layout. 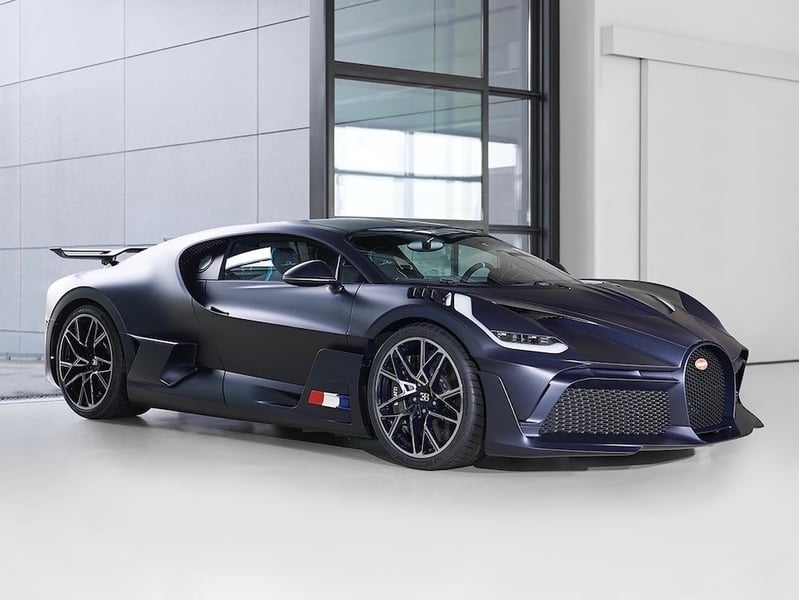 It has completely distinct driving dynamics, is wonderfully made, and has a striking personality.

For a more exhilarating driving experience, the suspension and chassis settings were altered, and the car's aerodynamics underwent painstaking modification to produce greater downforce.

The famed coachbuilding expertise and thrilling driving experience of the Divo are attributed to the legendary 8.0-litre W16 engine from BUGATTI, which generates 1,500 PS and 1,600 Nm.

The Chiron, its more economical sibling, and the Divo are identical in many ways, but the Divo has significant features that justify the additional expense.

Despite having the same 1,500 horsepower (1,119 kilowatts) as the Chiron, the Divo is 8 seconds faster around the Nardo test track thanks to a different aerodynamic arrangement. 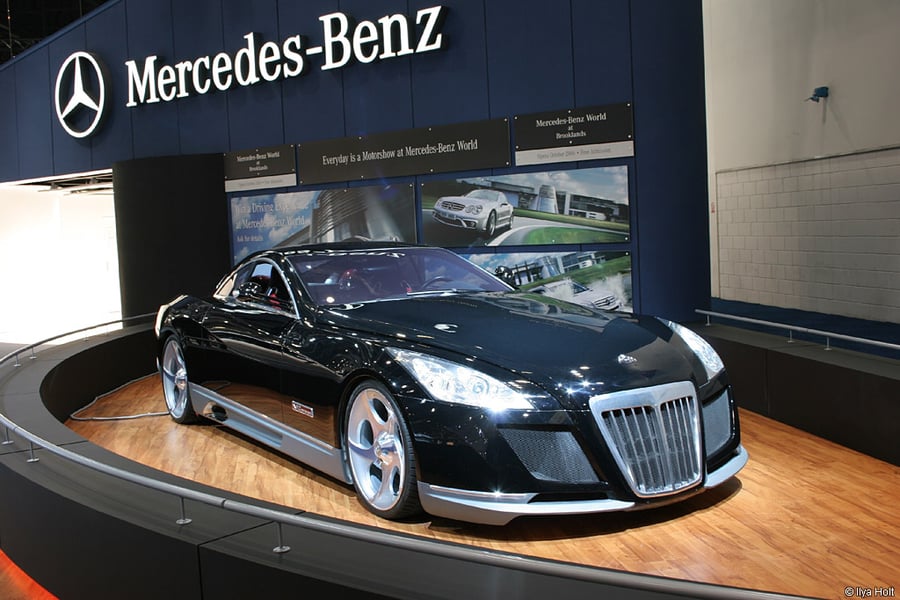 The Mercedes-Benz Exelero is an exceptional car. The Exlero made its debut in 2004 and was commissioned by Fulda, a German division of Goodyear, to test its new tyres.

The Exelero was constructed by Mercedes using the same twin-turbo V12 engine as the Maybach, which produces 690 horsepower (510 kilowatts) and 752 pound-feet (1,020 Newton-meters) of torque.

With an estimated top speed of 218 mph (350 km/h). The perfect and meticulous engineering of this supercar prevents aerodynamic stress.

It will be able to accomplish its goal with the highest level of effectiveness and efficiency.

In just 4.4 seconds, the Mercedes-Maybach Exelero can accelerate from 0 to 100 kilometres per hour (62 to 62 miles per hour).

Although the supercar is just $8 million, it would cost more than $10 million today. 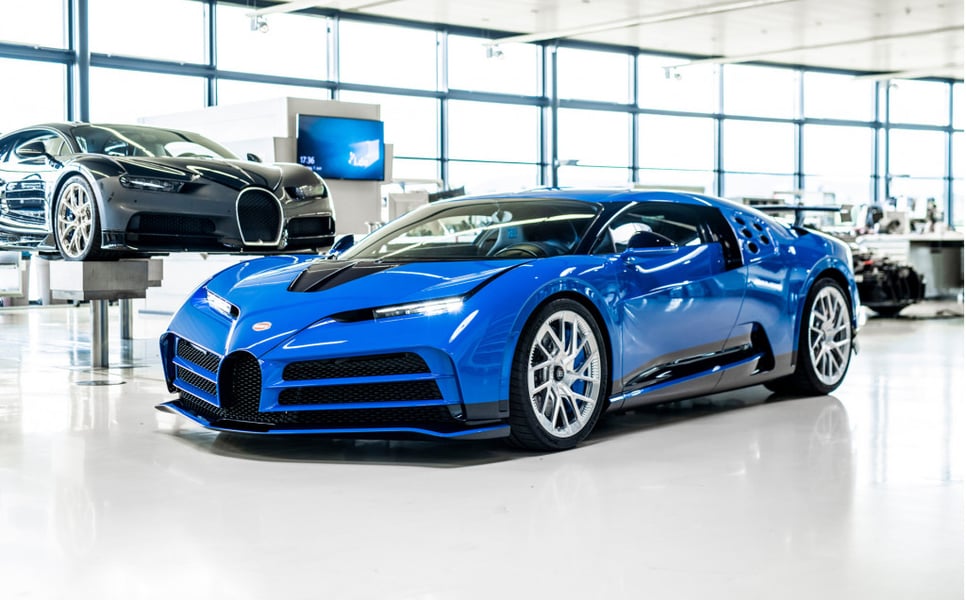 Bugatti unveiled the Centodieci, showcasing yet another extremely rare, extremely costly supercar to the world in 2022.

The Centodieci honours Bugatti's more recent past while carrying on the company's 110-year tradition of exceptional design and performance.

The car, which is only produced in 10 units, is distinguished by its faultless elegance and breathtaking sculptural beauty.

The Centodieci has become a true work of art with this modern homage to the Bugatti EB110.

Additionally, it celebrates the historic 110th birthday of Bugatti and pushes the boundaries of creativity with its amazing performance and cutting-edge design.

With its modern interpretation of the iconic wedge design and the renowned W16 engine, the Centodieci gently ushers the EB110 into the new millennium.

One of the most unique automobiles ever made, the $9 million car is extremely expensive. 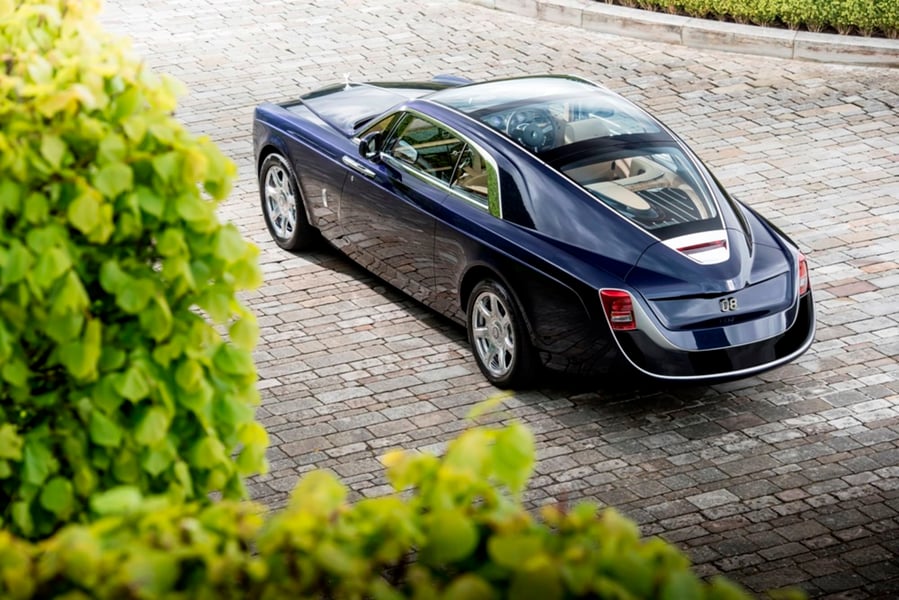 The jaw-dropping 453-horsepower Rolls-Royce Sweptail was at the time of its introduction the most expensive new car ever.

Sweptail was created as a result of a particular patron's passion for his favourite early 20th-century automobiles as well as numerous classic and contemporary boats. 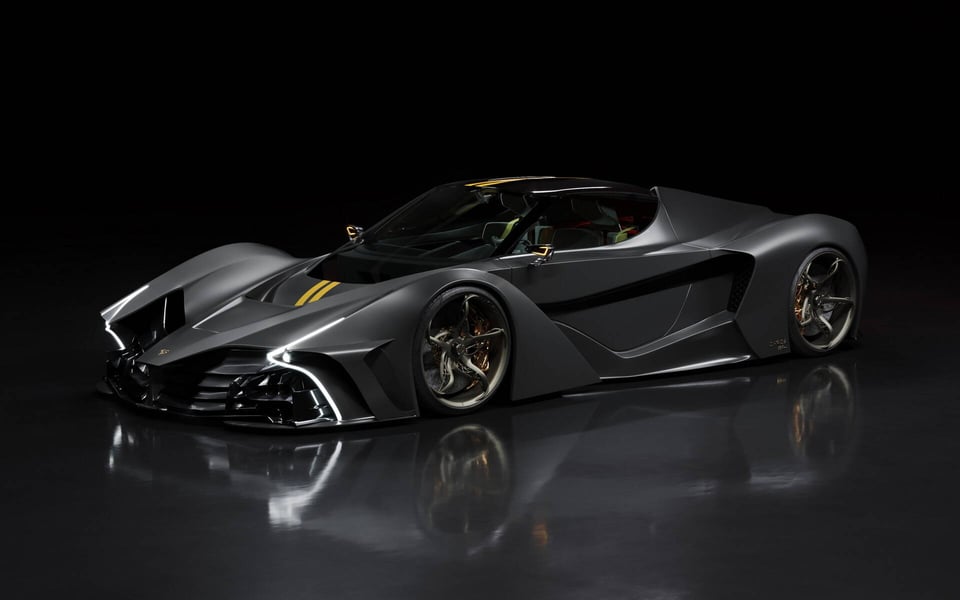 Although SP Automotive (short for Spyros Panopoulos) is a new company in the hypercar sector, the $6.4 million, 2,000-horsepower Chaos has already made a name for itself.

The regular SP Automotive Chaos, which features a twin-turbocharged 4.0-litre V10 and is one of the priciest cars on this list, topping some Lamborghinis and Bugattis, but there is an even pricier model that costs an astounding $14.4 million.

According to reports, the variant has 3,000 horsepower.

SP Automotive Chaos has the strongest synthetic fibre in the world and it tends to lean forward which makes it most obvious when braking hard. 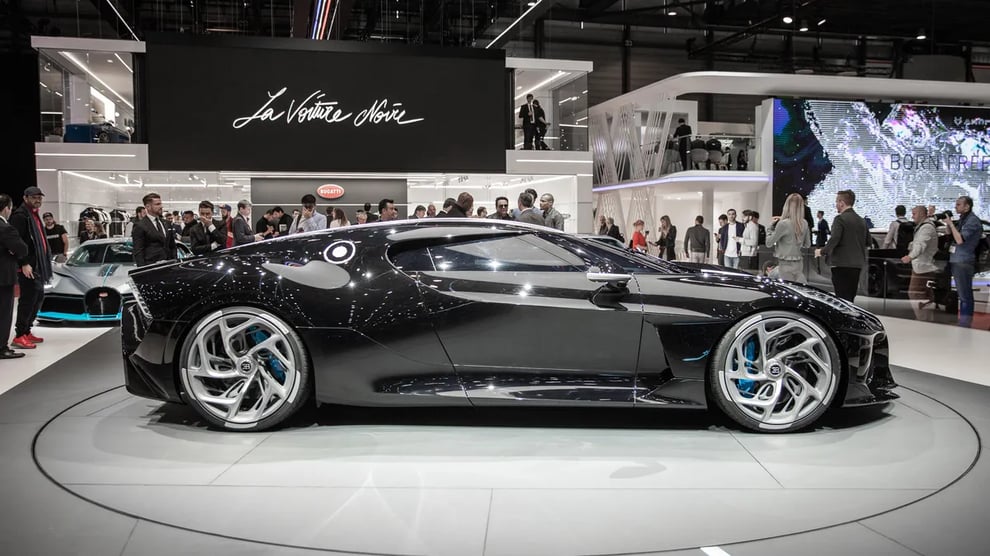 As a tribute to the Type 57SC Atlantic, The one-of-a-kind Bugatti La Voiture Noire or "The Black Car," is officially the most expensive new Bugatti ever produced.

The La Voiture Noire has the same quad-turbocharged 8.0-litre W16 engine as the Chiron, producing 1,479 horsepower.

It is a contemporary rendition of Jean Bugatti's own Type 57 SC Atlantic.

It has six exhaust tips, six brand-new, radical wheels, an aggressive, custom grille, and a large light-up emblem in the back that spells out the company name.

Naturally, this one-of-a-kind Bugatti already has a residence.

The Atlantic was created in 1934 by none other than Jean Bugatti, Ettore Bugatti's eldest son.

Only four of the opulent sports cars were made, and one of them was presumably lost forever during World War II.

The founder is expected to receive $100 as compensation. 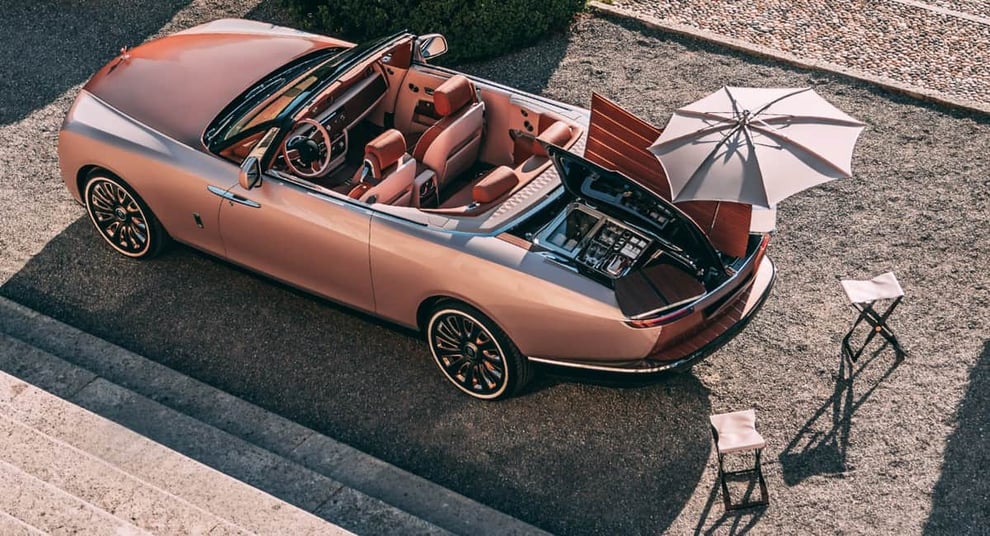 Rolls-Royce made a comeback to the coachbuilding business with the magnificent new Boat Tail.

The Boat Tail, which took the regal Sweptail's place in 2017 and has a striking two-tone appearance, luxurious custom finishes inside, and even a "hosting suite" with a champagne fridge and built-in sun parasol.

Rumours say that the Boat Tail originally cost an incredible $28.0 million, despite the fact that Rolls-Royce doesn't openly reveal pricing for unique projects like this one.

The hand-built automobile's design, according to Rolls-Royce, was "influenced by the racing boats of the 20th century."

The scion of a pearl industry tycoon who purchased this Boat Tail is described by Rolls-Royce as being "widely travelled, internationally educated, and cosmopolitan in his tastes and influences," and it will be added to his "sizable collection of classic and modern cars housed in a dedicated private museum."

The Boat Tail subverts the recognisable Pantheon grille with an unexpected twist on the intimidating emblem.

The surrounds are painted matte cognac, the metal is milled from a solid billet of aluminium, and the only distinguishing features are the polished vanes.

The Rolls-customary Royce's grille's absence of a peaked metallic structure draws focus away from the car's narrow headlamps and rose-gold Spirit of Ecstasy hood ornament and onto its long, wide hood for the first time.

The tail, which is clad in Royal Walnut veneer and has rose gold-plated pinstripes inlaid into it in a nautical theme, is where the arc tapers off after continuing around the cabin.

The satin-brushed finish on these pinstripes gives them a somewhat muted appearance.