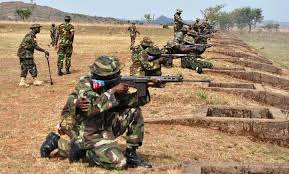 A hundred suspected terrorists have been confirmed dead in Niger State after a Joint Security Task Force operation at Bangi village in Mariga Local Government Area.

The State’s Police Commissioner, Bala Kuryas, confirmed the development on Thursday in Minna, adding that the task force recovered 61 motorcycles from the bandits in the operation which took place on Wednesday,  and that others escaped with gunshot wounds.

He urged residents to be vigilant of any persons with suspected gunshots to the nearest security post for swift action.

“We appeal to the rural dwellers not to hesitate to report to the nearest security outfits any person or group of people with gunshot wound for action.

“All we require from members of the general public is vital information that can aid our men on ground to deal with any form of security threat,’’ the commissioner of police said.

On its part, the Niger State Government has commended the task force for showing professionalism during the gun battle with the bandits.

The Chairman of Joint Security Task Force and Commissioner for Local Government and Chieftaincy Affairs, Emmanuel Umaru on Thursday said with operations like this, there would continue to be speedy progress in ridding the state of banditry.

"We are really making progress in the ongoing fight against banditry, kidnapping, cattle rustling and other criminal elements in the state.

The Commissioner confirmed the death of one security personnel in the operation.