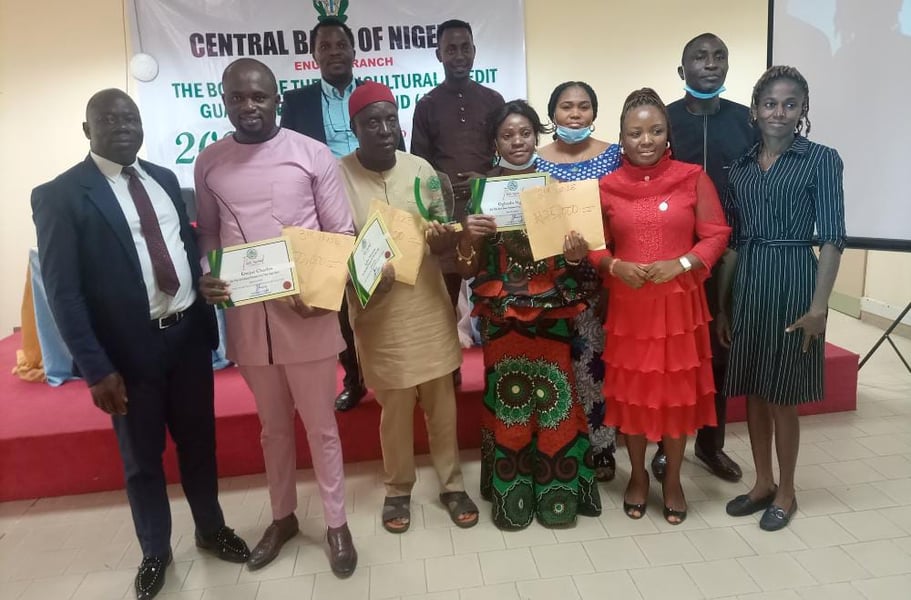 The Central Bank of Nigeria (CBN) says it disbursed a total of 368,519,000 to farmers in Enugu State under the Agricultural Credit Guarantee Scheme Fund (ACGSF) in 2021.

The disbursement was done through six commercial and microfinance banks operating in the state.

The branch controller of the bank in the state, Mr Chiedozie Okonjo who made this known during the 2021 Best Farmer and Participating Financial Institutions (PFI) awards in Enugu said that ACGSF was established in 1977 to induce banks to increase lending to the agricultural sector.

He said that the scheme guarantees 75 per cent of the amount in default to the lending financial institutions as an incentive, while borrowers are also entitled to enjoy an interest drawback of 40 per cent of the total accrued interest paid when paid within a stipulated time.

"The scheme seeks to reduce the challenges faced by farmers in accessing credit for activities across the value chain by reducing the risk exposure of the participating banks.

"It was also to encourage banks to shore up lending to the sector through the provision of a guarantee cover to loans given by banks for agricultural purposes."

On his part, the head of Development Finance Office Linus Nwokolo pleaded with financial institutions in the state to take advantage of the ACGSF scheme.

"I want to thank immensely all the microfinance banks that contributed to this success. What you have contributed is noted and in due time, you will get your reward.

"Pleaded with other financial institutions in the state to take advantage of the credit scheme. I appeal passionately to all banks to participate actively because, at the end of the day, we are helping the banks and helping the farmers.

During the awards, Kenechukwu Microfinance Bank was crowned the best PFI of the year while Umuchinemerem and Lapo microfinance banks emerged first and second runners-up respectively.