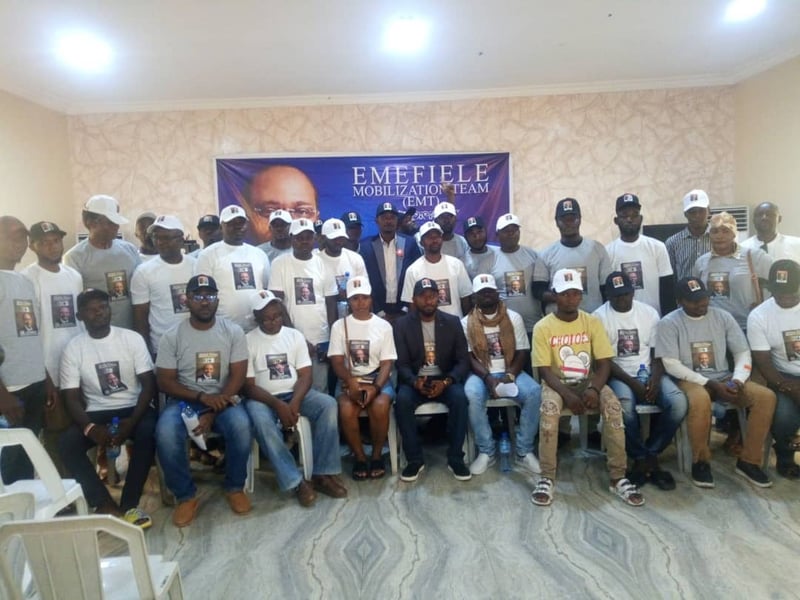 An APC support group, Emefiele Mobilization Team (EMT) is rooting for CBN Governor Godwin Emefiele as president of Nigeria in the 2023 election.

The EMT is a group under the ruling All Progressives Congress (APC).

The National Coordinator of EMT, Dr. Jacob Attah, spoke at a news conference on Saturday in Lokoja on behalf of the National Executive Committee of the group.

According to him, the EMT is made up of patriots who have come together to showcase the leadership qualities of the CBN governor.

“For a man who was born in the South-West, schooled in the South-East and from the South-South, Dr. Emefiele represents a unique opportunity for peace, unity, and development not just in Southern Nigeria but across Nigeria.

“We call on all patriots to stand up and be counted in the all-important task of who becomes the next president of Nigeria and support the call for Dr. Godwin Ifeanyinchukwu Emefiele to run for the highest office in our nation.

“At a time when Nigeria is passing through a lot of economic and security challenges, we must bring in experience, dynamism, energy, equity, and fairness in the choice of who becomes the next President of Nigeria.

“Over the past eight years at the helm of the affairs of the Nigeran apex bank, Emefiele has shown capacity, focus, courage and worked tirelessly with the economic team of President Mohammadu Buhari to keep the economy of our great country afloat above recession and outright collapse.

“His policies in the area of education, health, agriculture, industry, and social credits have brought about positive transformation in these sectors and strengthened the Nigerian economy,” he said.

The coordinator stressed that Dr. Emefiele had done well as CBN governor, saying his policies have reflected in the growth of the country’s Gross Domestic Product (GDP) and created lots of employment in all states of the federation.

“The Anchor Borrowers’ Scheme is one of Dr. Emefiele’s many achievements that benefitted over 4.8 million Nigerians spread across the country.

“Under the scheme, the CBN launched the brown revolution, an intervention aimed at boosting the wheat value chain.

“Wheat is the most widely consumed commodity, after rice, and only one percent of it is produced in Nigeria with about $2 billion spent annually on its importation.

“With this brown revolution, the CBN cut about 60 percent of this importation cost and brought about 22.35 percent and 23.78 percent growth in GDP in the first and second quarters of 2021 alone,” Attah said.

He added that 150,000 farmers were beneficiaries cultivating 100,000 hectares, saying this had improved local production of wheat in line with the mandate of the government “to produce what we eat and eat what we produce“.

He explained that the production of onions was another area where the people have benefitted immensely from the CBN’s policies under Emefiele.

Attah said that the provision of loans under the scheme had assisted onion farmers in the North-central to make up for the 1.1 million tonnes shortage.

“Cotton is the third commodity to join the Anchor Borrowers Scheme after rice and maize, with 15,000 cotton farmers securing loans to mention a few.

“This has significantly improved cotton production in Nigeria.

“Rice farming has been supported and boosted by the ABP as well; over 1.8 million farmers in Nigeria received seedling, fertiliser, herbicides, pesticides, water pumps, and more with beneficiaries from across the country.

“For now, Emefiele is focused on his assignment as the governor of the CBN.

“We use this opportunity to caution those who may wish to carry out actions or make statements capable of distracting him from delivering on his national assignment as the head of Nigeria’s apex bank”.

He called on all patriots to stand up and be counted in the all-important task of who becomes the next President of Nigeria and support the call for Emefiele to run for the highest office in our nation.

The national coordinator said that the youth population would be adequately carried along in the process.