2023: Atiku Not Qualified To Be President — Malami 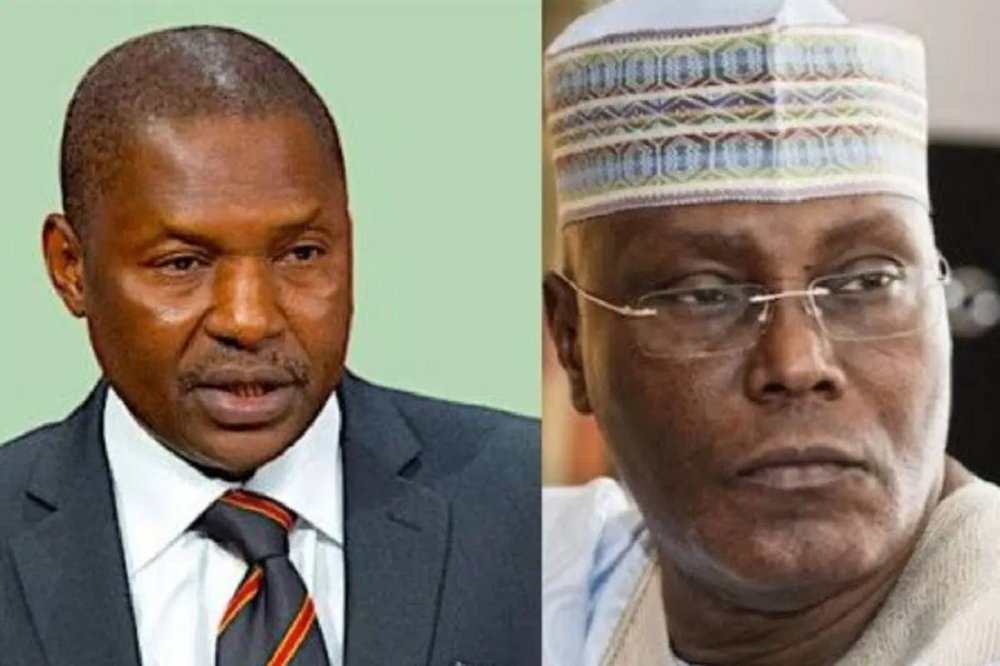 Abubakar Malami, the Attorney General of the Federation and Minister of Justice on Tuesday said former Vice President Atiku Abubakar is not eligible to contest for the presidential election in 2023, saying “he is not a Nigerian by birth.”

Malami argued that if Atiku ran for president, he would be breaching Section 118(1)(k) of the Electoral Act since he was not born in Nigeria or to Nigerian parents, and he had not fulfilled the criteria of Sections 25(1) & (2) and 131(a) of the constitution.

Malami who stated this to the Federal High Court sitting in Abuja joined the suits filed in 2019 by the Incorporated Trustees of Egalitarian Mission for Africa (EMA) against the PDP and Atiku, challenging Atiku’s eligibility to contest for president.

The affidavit filed is seeking the court to hold among others, that considering the provisions of sections 25(1) &(2) and 131(a) of the constitution and the circumstances surrounding his birth, the former vice-president cannot contest for the apex office.

Recall that Atiku was the presidential candidate of the Peoples Democratic Party (PDP) in the 2019 general election where he lost to the incumbent, President Muhammadu Buhari of the All Progressives Congress (APC).

But Atiku’s son, Adamu, who spoke during the presentation of his scorecard as Commissioner for Works and Energy in Adamawa State, in June last year, said his father would contest again in 2023.

“In 2023, my father will be aspiring to the number one office in the land because he has been an astute, strategic, master politician for almost four decades,” he said.

In their replies, Atiku and the PDP asked the court to dismiss the suit for lack of merit, maintaining that Atiku is a bona fide Nigerian citizen who has held different positions in the country.

However, Justice Inyang Ekwo has fixed May 4, for the hearing of the suit.

“For the avoidance of doubt, Atiku’s Nigeria’s citizenship is a settled matter, and anything contrary to that is a figment of Malami’s warped imagination,” the statement reads.

“For Malami to join the suit filed by a hurriedly put together group known as Trustees of Egalitarian Mission for Africa (EMA) begs the question as to what the interest of Malami the AGF is.

“The suit before the court challenging the citizenship of Atiku Abubakar, it would be recalled, has been exhaustively dealt with by the Court of Appeal and same affirmed by the Supreme Court at the final judgment during the presidential election petition tribunal.

“It is therefore laughable and inconceivable to see the Attorney General of the Federation putting his weight behind such an exercise in futility.”