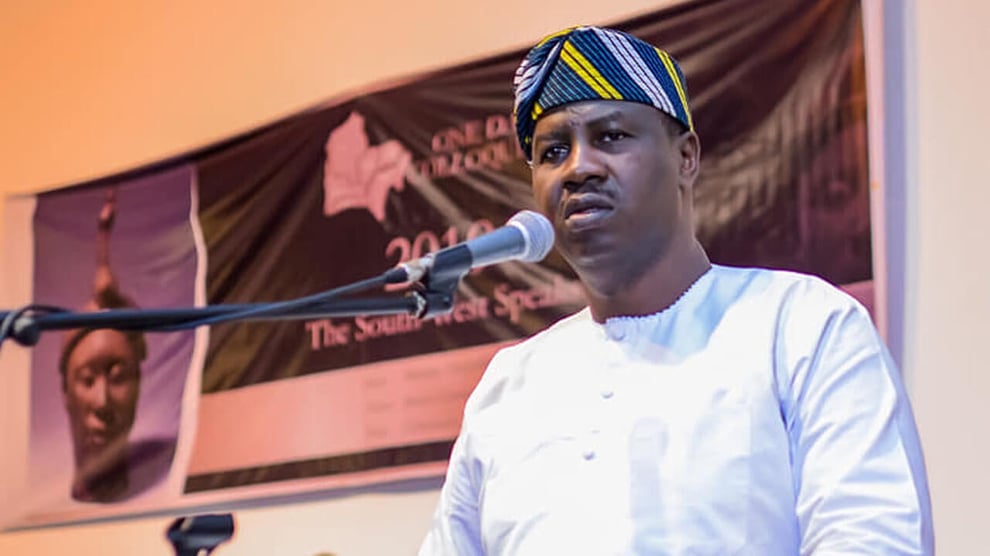 He announced his defection from PDP to Labour Party on Friday in a statement he released on his Facebook page on Friday.

Gbadamosi in a statement titled 'To Whom It May Concern' said he is joining Labour Party to support the presidential aspiration of the party’s presidential candidate, Peter Obi.

The statement reads in part: “In 2008, I joined the People’s Democratic Party, at Ward A1, Ikorodu LGA, in Lagos State.

"I was a loyal member of the party, contributing whatever I could, materially, intellectually and financially, to the growth and development of the party in Lagos State and throughout Nigeria, until I took an early retirement from partisan politics in 2017.

“In my attempts to brush off the advances of a new political party in 2018, I inadvertently committed myself to running on their platform for Governor of Lagos State.

“In that contest, I went head-to-head with the likes of my Uncle, Mr Jimi Agbaje and the current governor, Mr Babajide Sanwo-Olu.

"I did all I could in that contest and in the end, gave a good account of myself, even as I did not win.

“A few months later, after a lot of persuasion by staunch PDP loyalists like the late Niyi Aborishade, my good brother Segun Adewale and many respected leaders of the party, I made the decision to rejoin the PDP.

"It made sense to me at the time, considering that I had in fact ended my short-lived retirement with the Gubernatorial elections of 2019.

“Shortly after I rejoined the party, the seat of the Senator representing Lagos East Senatorial District became vacant as a result of his untimely demise.

"I was drafted into the race to replace him by leaders of the party, and despite my initial reluctance, I did my best in that contest, despite the fact of having just contested a major election in the previous year.

“We were handicapped by a glaring lack of support from the highest levels of the party, with only one out of 16 PDP governors identifying with us, barely 24 hours to the elections.

"As I had come to expect in the last week of the campaign, certain members of the party executive, at the behest of a man now known to be a double agent for Tinubu, turned against us on election day and we did quite poorly.

“I came to recognise that the problems of PDP run quite deep, and their tepid opposition to the inept, incompetent, corrupt and reckless APC government is in fact by design of some unscrupulous individuals populating the party leadership from top to bottom

“I had completely lost hope in Nigeria, especially in the youths, considering how the senatorial bye-elections went after the traumatic events of #EndSARS and the #LekkiTollGateMassacre of 20-10-20.

“However, the exit of Mr Peter Obi from the PDP and his subsequent emergence as the Presidential candidate of the Labour Party, as well as his brilliant choice of Mallam Yusuf Datti Baba-Ahmed have rekindled that hope.

“I am 54 years old, and never in my life have I been privileged to witness the kind of energy, vim, vigour, unity and tenacity of purpose being exhibited by youths of all ethnicities and religious backgrounds in Nigeria over a political candidate as they’ve been doing for some time now over the #ObiDatti2023 team.

“Almost all youths who are not professional politicians or influencers-for-hire (many are) are, as is now the popular parlance, Obi-dient and Yus-ful – a creative play on the names of the Labour Party Presidential and Vice-Presidential candidates.

“There is extremely good reason for this frenzy, as Mr Peter Obi had over the years, shown himself to be a creative, prudent and frugal administrator as well as a trustworthy custodian of public funds.

"His VP pick, the urbane Dr Datti Baba-Ahmed, is an equally prudent, practical and PRINCIPLED politician, whose acquaintance I had the pleasure of making a few years back.

“These two share a passion for education and knowledge, with Obi’s documented exploits in the education sector as Governor of Anambra State, and Baba-Ahmed’s direct investment in education as Pro-Chancellor of the highly respected Baze University, Abuja.

"Both share a disdain for graft and believe in exterminating contract padding – the bane of Nigeria.

“I find myself left with no choice, when faced with the alternatives, but to publicly throw in my lot with these two fine gentlemen, especially considering that another good Uncle of mine, Dr Doyin Okupe is one of the navigators of their journey and had invited me very much earlier.

“I hereby publicly declare my resignation from the PDP and wish all the remaining members well.

"By the same token, I also hereby publicly declare my support for the Labour Party and all its Presidential Candidate, Mr Peter Obi.

“To all my friends and comrades in the PDP who want the best for Lagos State and Nigeria, I say this: By the Special Grace of God, we will meet again, because the word of God in the book of Isaiah Chapter 1 verse 19 says:

“If you are willing and obedient,  you will eat the good things of the land;”

“Do join us in the Labour Party quickly. Time waits for no one. I remain Obidiently and Yus-fully." 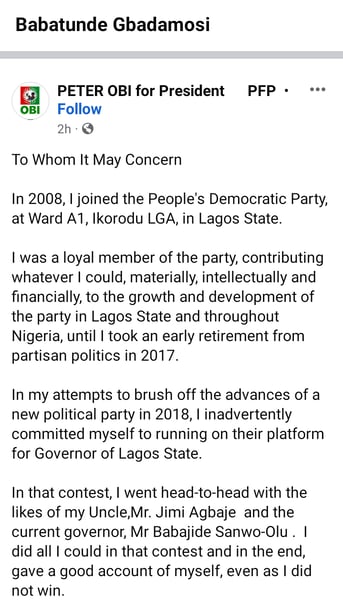 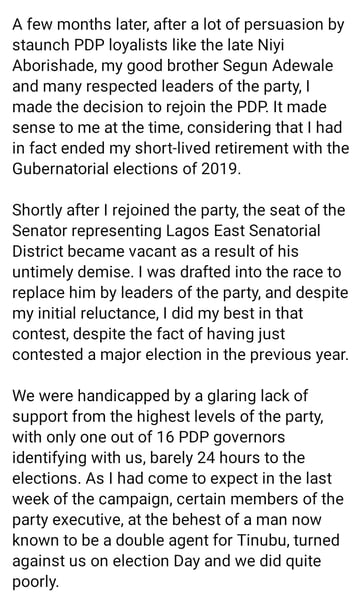 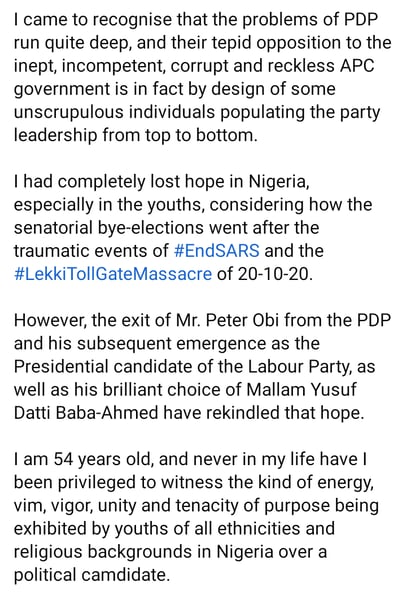 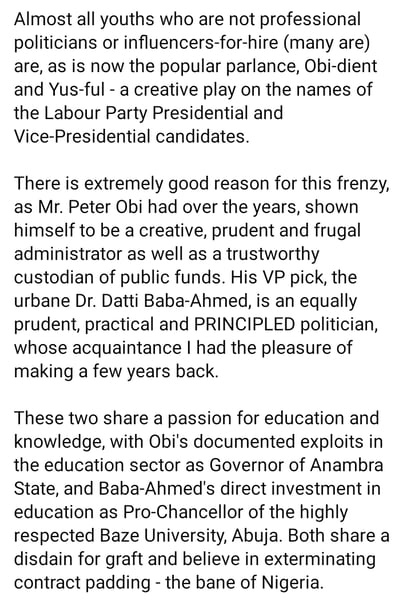 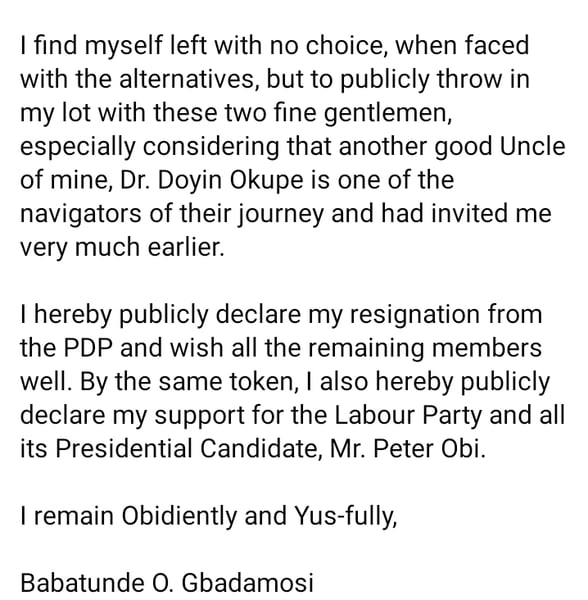