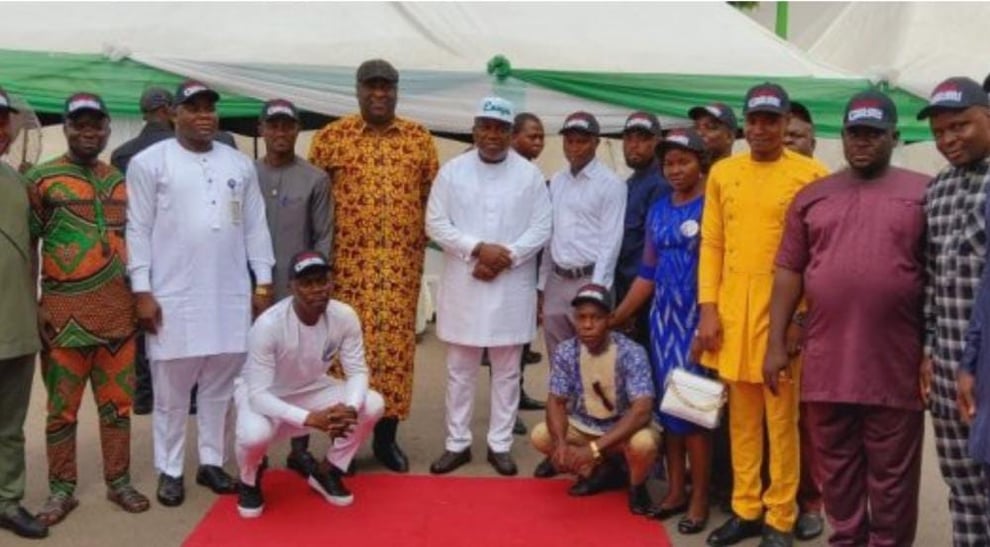 Councillors of the 260 electoral wards in Enugu State have assured Governor Ifeanyi Ugwuanyi of their support for him and all the Peoples Democratic Party (PDP) candidates in the 2023 general election.

The 260 councillors, gave the assurance when they paid a ‘Thank you’ visit to Ugwuanyi at the Government House, Enugu on Tuesday,

The elated councilors added that if not for the magnanimity and selfless leadership style of the governor, none of them would have emerged as a councillor in the state.

They also appreciated Governor Ugwuanyi for always believing in the youths, disclosing that 99.9 per cent of the present councillors in the state are youths.

Speaking on their behalf, the Coordinator of 260 Ward Councillors in Enugu State and leader of Udenu Legislative Council, Hon. Nnamdi Odo, said that past councilors during previous administrations did not enjoy the privilege they enjoyed during the selection process leading to their emergence, stressing that they emerged without godfathers.

“Your Excellency, we came to tell you thank you.

"We owe you thank you and part of our coming is to also tell you that we are going to deliver our wards to the PDP come 2023.

"There is no ward in the 260 wards that will be lost to the opposition.”

Stressing their eagerness to work as grassroots mobilisers, Hon. Odo said: “Your Excellency, if you look carefully, you will see that we have the strength to work and we are eager to work.

"It is not that of social media. We are on the ground at the grassroots.

“The debt we owe you, our father and leader, and our great party, the PDP, is come February 2023, we will deliver all the candidates of our party starting from you, Your Excellency, our governorship candidate, Barr. Peter Mbah, and other candidates for the senatorial seats, House of Representatives and House of Assembly.

“It is our task and we are going down to our wards to ensure that we deliver all these candidates come 2023 elections.”

Commending Gov. Ugwuanyi for his youth-friendly initiatives, the coordinating councillor pointed out that Enugu youths have never had it so good.

“You (Ugwuanyi) are the only governor in this state who came and accommodated many youths in your administration through political appointments and election into public offices.

"The only administration that faced the nation’s recession twice within five years.

“We are wondering and we said when we come today, we will ask His Excellency, how he is doing this magic of entrenching peace and good governance in Enugu State.

“At the end of every month, our parents receive their salaries, workers are not being owed, and you construct projects in all nooks and crannies of Enugu State.

"The communities in Enugu State bear testimonies to what His Excellency is doing. We urge you to keep it up.

“Your Excellency, as a man with a large heart, you accommodate all.

"The payback time will come by 2023. We are united more than ever.

"We have become a formidable structure in the 17 local government areas and 260 wards in the state and we assure you as grassroots mobilisers that we will deliver all the PDP candidates.”

Corroborating Odo’s remarks, the zonal coordinators for Enugu East and Enugu West senatorial districts, Hon. Caleb Ani (Enugu South LGA) and Philip Igwe (Aninri LGA) respectively, applauded Ugwuanyi’s exemplary leadership qualities, peace and grassroots development initiatives and commitment to the well-being of youths of the state, reassuring him that the 260 councillors will deliver all the candidates of the PDP in the forthcoming elections.

Encouraging the councillors to remain focused, steadfast and committed to the ideals of the PDP and progress of the Gov. Ugwuanyi-led PDP administration, the Speaker of Enugu State House of Assembly, Rt. Hon. Edward Ubosi, thanked them for opting to work for the victory of the PDP at the polls in 2023, assuring them that they stand to benefit more in the future.

Listing the challenges that his administration has encountered since inception to include economic recession which was experienced twice within five years, COVID-19 pandemic and EndSars protests, Gov. Ugwuanyi who appreciated the councillors for the solidarity and support, attributed their emergence as councillors to the will of God.

The governor thanked them for their contributions towards the peaceful atmosphere in Enugu State and reiterated his administration’s commitment to their well-being, disclosing that Enugu was not among the eight states in the country listed by BudgIT to be owing at least six months salaries of some of their workers.

He therefore called on the councillors to continue to pray for his administration, the state and a peaceful transition in 2023.