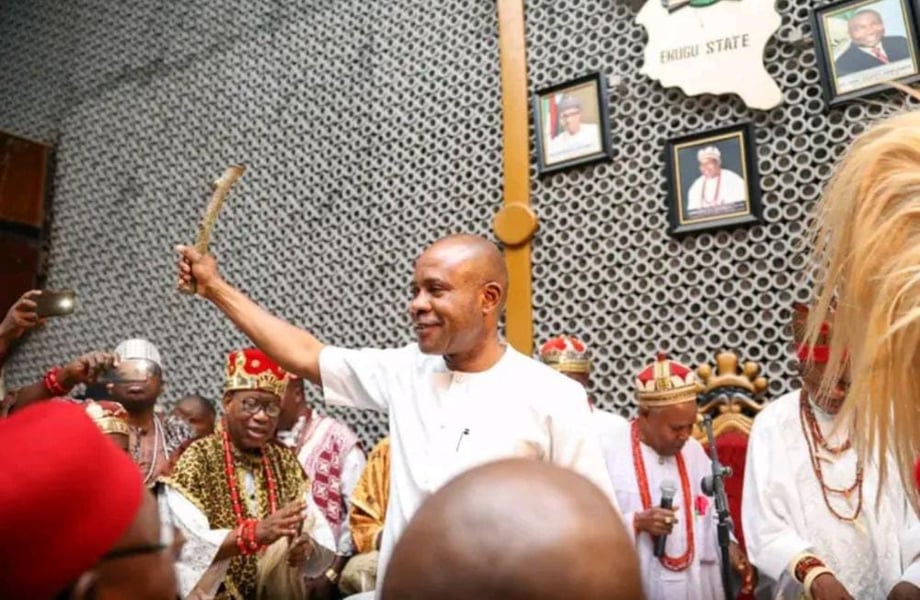 The monarchs also pledged to give him support that would lead to his victory in the forthcoming general elections.

Speaking on behalf of the traditional rulers, the Chairman of the State Traditional Rulers Council, Igwe Ambassador Lawrence Agubu-uzu urged his colleagues to pray for the political aspiration of Mbah and wished him success in the general elections, adding that all the state’s traditional rulers were happy with him.

Recalling the events that preceded the May 25, 2022 PDP primary election in the state, the Chairman of the traditional rulers council said they once gathered in Enugu and took a decisive position on where the next governor of the state should come from, maintaining that their joint communique stated unambiguously that they stood with Enugu East Senatorial District in line with the existing zoning template in the state.

The traditional ruler further stated that the governorship candidate of the PDP had immense respect for the traditional institution and the royal fathers which necessitated his visit to them.

“The emergence of Hon. Barr Peter Mbah as the candidate of the PDP is in keeping with the rotational principle advocated in our earlier mentioned communique.

"By coming to consult us today, he shows that he respects us as the custodian of our culture and tradition.

"I implore all of us as we normally do in circumstances like this to pray for him, wish him success through our joint presentation of ófó staff to him,” he said.

Speaking on the importance of the visit to the traditional rulers, the Director General (DG) of Peter Mbah and PDP Campaign Organization, Chief Ikeje Asogwa said they had honoured the invitation to formally present the party’s gubernatorial flagbearer to the assembly of rulers from all the geopolitical zones.

The DG who insisted that their visit had no connection or any colouration of campaign said at the appropriate time they would embark on campaign activities where they would interface with members of the public.

While presenting the ófó staff to the gubernatorial standard bearer, the royal fathers prayed that God would grant him victory in the election.

They said they were happy and satisfied with his candidature, saying that that the ófó staff is “our sign of support for your gubernatorial aspiration.”

According to the traditional rulers, their message was clear to the whole world, urging their subjects to vote wisely for leaders who could bring peace, security, development and prosperity to the nation.

Reacting to his endorsement by the traditional rulers count, Mbah expressed his profound gratitude at their generosity for considering him the best candidate for the task ahead.

Mbah who promised not to disappoint the traditional rulers and the people of the state if elected said he would continue to represent the values the people were expecting from a good leader.

He assured the people of his resolve to inspire transformation and engender a quantum leap in the gross domestic product (GDP) of the state, reiterating his overall goal of making the state the preferred destination for business, tourism and living.

Mbah also restated his commitment to tackle youth unemployment through his integrated rural programmes and policies that would bridge the gap between urban and rural areas.

According to him, policies that would enhance peace and security in the state will be initiated.

“Our policies will be targeted on how to achieve peace and security as that’s  the foundation for growth and development.

"We will address the key issue of youth and unemployment in order to solve security fragility.

“Also, we have programmes that will address the issue of accessibility to our different communities.

"All these weak links will be properly given attention,” the governorship frontrunner said.