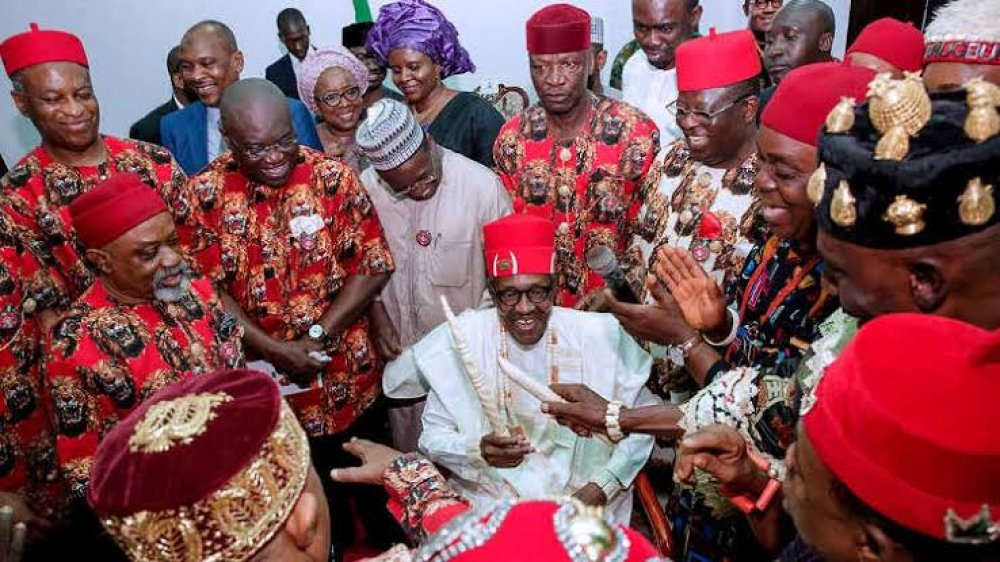 A former Minister of Finance, Dr. Kalu Idika Kalu says it is absurd and counterproductive to talk about Igbo presidency, Yoruba presidency, Hausa presidency, and Fulani presidency, warning that it will be shameful for Nigeria to still be mouthing centrifugal forces, ethnicity, when the whole world would by 2050 expect the third largest country to provide leadership.

He explained that now is the right time to start if the South-East is serious about producing the next President of Nigeria, urging them to seek national relevance across all bases as "You can’t shy away from a party that is clearly in a better position to bring out those who may win and you expect to lord it over them and install yourself there".

Decrying how the South-East lost out of the country's political calculus, the elder statesman pointed out that the Igbo had in the past been major players in national politics hence present-day Igbo politicians must do a soul-searching in order to find out why the bloc is no longer reckoned with in Nigeria's politics.

"I encourage a lot of our people and they will confirm it; you cannot come up with one party, whatever that party is, but you should go out and contest for power within all the bases for contestation involving the national leadership.

"That is the way to do it, and we are not going to do it on the eve of the election, and start the absurdity of, as I said the Igbo presidency, Yoruba presidency, Hausa presidency, and Fulani presidency.

"That is where the name of the game should be. Are you in the parties that could bring out the leaders, if you are not in those parties what kind of magic do you employ to bring out somebody and say, yes, because power has been here and there, it has to be that person. There is enough time for our people to read the situation the way it should be read.

"It is counter productive and absurd; it is not really the kind of efficiency argument to just say, it should rotate there or here. The people have to be involved in the political process. You can’t be spending half of the time tying your loin and during elections, you say no, no, those people have been ruling, we should come and rule in Abuja. We have to really get involved.

"There is no reason why we shouldn’t get involved, we have always been involved: we have always been a major player. So, if we are not now, we should find out why, and we have to force the situation through the political process. You can’t shy away from a party that is clearly in a better position to bring out those who may win and you expect to lord it over them and install yourself there. It is unrealistic."

The former Minister however pointed out that South-East has enough time to reorganise her politics before the next general elections, adding that "It is good that the question is being raised now; we have two years to go and plenty of time to restructure.

"There are institutions that some of us were instrumental in setting up to enable our people to organise to rebuild the East. Being in a position, I wrote that paper and I said, I’m not writing this for the East, it is also what the West should be doing, it is also what the North should be doing because by the time you rebuild, not quarreling over politics and spoils of office, and sharing national cake, but building up the real sectors, the infrastructures, the communications, etc. By the time you build it up on four different bases the country comes up stronger.

"Come 2050, when the whole world expects third largest country to provide leadership and we are still talking centrifugal forces, ethnicity and all kinds of things. It will be a big shame and we will bear the brunt of letting our own race down when we should be up there taking the table side by side with India, China, Russia, America, etc.

"This is the time to start planning for it; if you are planning that, you should know that people have to go back massively into education,  science and technology, space exploration and they have to be able to feed themselves and supply the rest of the world with their food surpluses because we have the land, everything. These are the issues, not all these Igbo presidency, Yoruba presidency, and Hausa presidency.

"Those things sound very absurd, but rather there are political processes; there are procedures to make sure that it could be the natural flow of things not a special consideration, special award, special pity to say let’s consider the Igbo person as president. That is an insult as if the Igbo president is anywhere less than any other president.

"What we need is a leader that can take Nigeria into that comity of nations wherever that person comes from, and there is no reason, as I have always emphasized when I was running for that office, I said, beside the matter as an Igbo person, we are looking for somebody who will be a modern leader, and there is no person who will tell me that the West or the North is better able to do that than the East.

"You don’t have to label the person Igbo president because he comes from the East. I’m looking for a modern leader who takes the country as his own constituency; we better begin to talk in those terms. We are 30 years away from 2050; it may even happen faster than that."