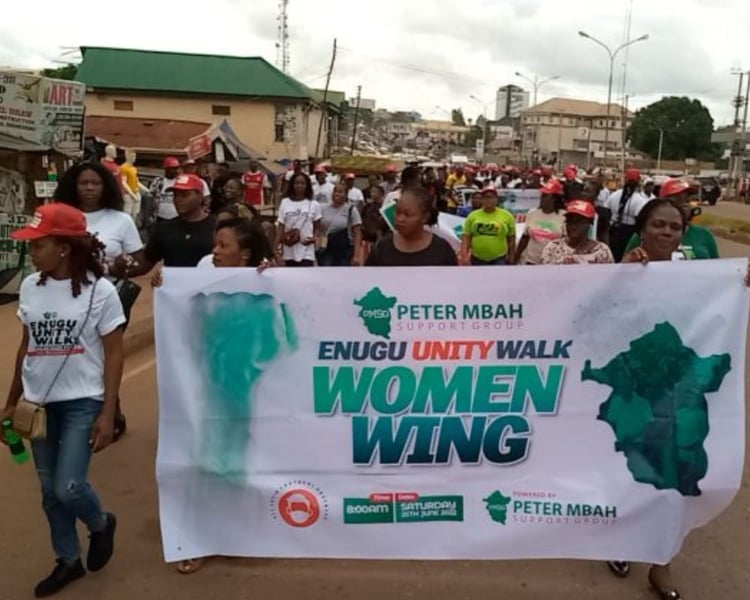 The support group of the governorship candidate of the Peoples Democratic Party (PDP) in Enugu State, Barr. Peter Mbah on Saturday held a march to sensitise residents on the need to get their Permanent Voters Card (PVC) in preparation for the 2023 general election.

The crowd numbering over 5,000 moved round major streets in Enugu, sensitising the populace on the need to get their voter's card. The march terminated at Okpara Square.

In attendance were members of the Peter Mbah Support Group who were drawn from the 17 local government areas of the state.

Also in attendance were students from all tertiary institutions in Enugu State, who expressed the need for free, fair and credible elections in 2023.

In an interview after the exercise, the Director General of the group, Emeka Ogbu-Nwobodo, said the purpose of the walk was to reemphasise the importance of PVC registration to the general public.

“Our objectives for embarking on this are physical fitness, endorsement of good governance in the state, sensitisation of the people to obtain their PVC and using it to vote at elections, and garner support for our dear brother and boss, Dr. Peter Mbah, the PDP governorship candidate in the state.

He however called on well meaning residents of Enugu State to throw their support behind the PDP gubernatorial candidate, Peter Mbah, describing him as the answer to the prayer of Enugu people.

On his part, the Chairman of Nkanu East Local Government Area, Sydney Ede admonished every Enugu resident who is of voting age to, as a matter of responsibility, get their PVCs and ensure that they vote during the election.

Many of the participants who came to the march with their PVCs were rewarded with various cash prizes and other giveaways.