2023: The Biggest Gift I Need From ‘Ndi Enugu’ Is Peace, Says Ugwuanyi 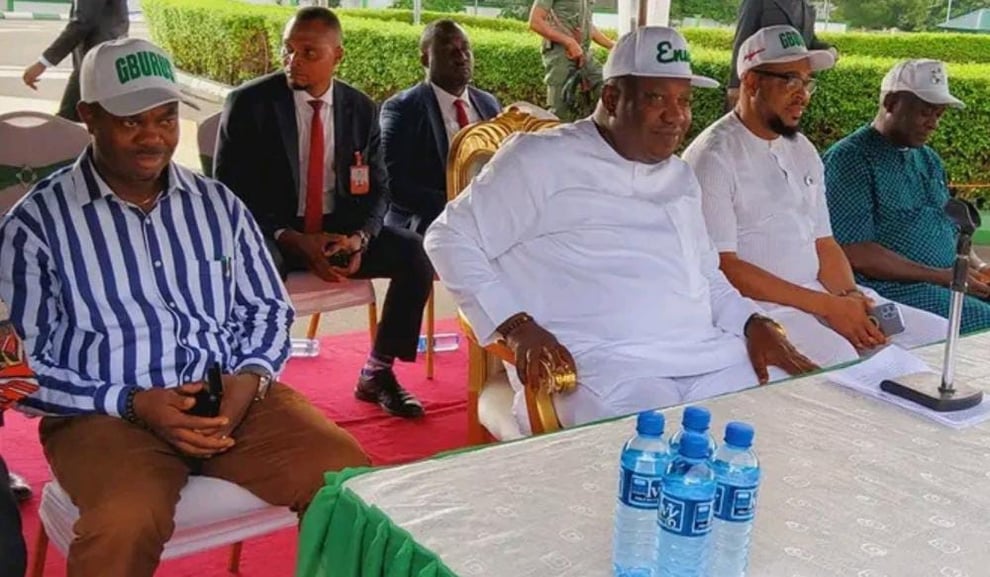 Enugu State Governor Ifeanyi Ugwuanyi on Thursday said that it is his utmost desire for all communities in the state to continue to live in peace and harmony for steady progress and development of the state.

Ugwuanyi stressed that the biggest gift he needs from the people of Enugu State is continuous peace.

The governor made the assertion when the people of Mgbowo Community in Awgu Local Government Area of the state visited him at the Government House, Enugu to appreciate his good works and peaceful disposition, as well as his considerable concern for their well-being and concerted efforts in addressing myriads of their socio-economic challenges.

The people of Mgbowo, led by the Commissioner for Science and Technology, Sir Obi Kama, were also at the Government House, Enugu, to declare their unflinching support for the Gov. Ugwuanyi-led Peoples Democratic Party (PDP) leadership in Enugu State, the governorship candidate of the PDP in the 2023 general election, Barr. Peter Ndubuisi Mbah, his running mate, Barr. Ifeanyi Ossai, and the candidates of the party for Enugu West Senatorial District, Aninri/Awgu/Oji-River Federal Constituency and Awgu South Constituency, Engr. Osita Ngwu, Engr. Anayo Onwuegbu and Hon. Tony Nwankwo, respectively.

Thanking them for their solidarity and support for his administration, the PDP governorship candidate and other candidates of the party, Gov. Ugwuanyi who is the leader of the PDP in Enugu State and the Southeast geo-political zone as well as the candidate of the party for Enugu North Senatorial District, urged the delighted people of Mgbowo to hold on tightly to their belief in the PDP, reassuring them that Barr. Mbah and Barr Ossai will build on the foundation his administration has laid, which is anchored on peace and good governance.

Earlier, the President General of Ekpulambo Mgbowo, Chief Sir Collins Okelu, stated that “Mgbowo Ward has benefited so much from your purposeful and people-oriented leadership in the state in so many areas.”

Chief Okelu listed some of the governor’s remarkable achievements in Mgbowo Ward to include “the construction of ultramodern classroom blocks at Community Primary School Ezioha Mgbowo, upgrading of Technical and Vocational College, Imama Mgbowo to one of the best and most sought after in Enugu West, creation of access road from Old Road, Amaiyi Mgbowo to Enugu-Port Harcourt expressway, construction of three solid box culverts linking the three villages of Ekpulator Mgbowo, Inyi, Ezioha and Imama, and laying of asphalt on the Amata Mgbowo road project attracted by Major General F. Azubuike Azinta.”

“We have neither gold nor silver to give you in return for your continuous magnanimity to our people, therefore, our visit to you today is to pledge our unalloyed support to you and our candidates.”

This came as numerous support groups equally visited Gov. Ugwuanyi separately at the Government House, Enugu, to declare their solidarity and support for the governor’s senatorial bid, that of the PDP governorship candidate, Barr. Mbah, his running mate, Barr. Ossai, and all other candidates of the party, pledging to mobilise the electorate to support the PDP and its candidates at the polls.

The groups commended Gov. Ugwuanyi for entrenching peace and good governance in the state in spite of the nation’s economic, security and public health challenges.

They also applauded the governor for being gender sensitive and empowering the women of the state through employment opportunities, political appointments and various profitable programmes such as the World Bank Agro-Processing Productivity Enhancement and Livelihood Support (APPEALS) scheme.

The groups went further to appreciate Gov. Ugwuanyi for the remarkable development projects of his administration in spite of the state’s lean resources, including the Opi-Nsukka dual carriageway, the 5,000-seat capacity Township Stadium, the T-junction Flyover Bridge at Nike Lake Road, Enugu, massive projects at the newly established State University of Medical and Applied Sciences (SUMAS), Igbo-Eno, Enugu State as well as the ones his administration executed at the new Federal Polytechnic, Ohodo, that he attracted, the new court buildings, the State Secretariat Annex in Nsukka, and various road construction in urban and rural areas, among other achievements.

Prominent among the groups were the ‘Dynamic Women for Good Leadership Initiative’, led by the Convener, Rita Chimaobi Ihemeje Ezeh; ‘Nwanyi bu ife Support Group for Gburugburu’, led by the Founder, Princess Chinwendu Ogbonna; ‘Nsukka Local Government Youth for PDP’, led by the Coordinator, Hon. C. C. Oziokoja Ozioko; and ‘Nsukka Asadu Youth Movement’, led by the Director General, Hon. Ejike Oscar Ugwuoke, a former House of Representatives aspirant for Nsukka/Igbo-Eze South Federal Constituency on the platform of the PDP, who galvanised his teeming supporters and asked them to work assiduously for the victory of the PDP at the polls in 2023.