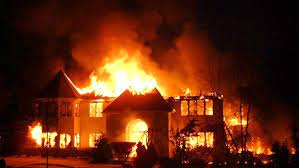 A 70-year-old man has lost six members of his family, including children and grandchildren in a fire outbreak that occurred in his house in Rivers State.

The incident occurred in the Ngbede community in Ogba/Egbema/Ndoni Local Government Area of the State.

The survivor, Fidelis Ezinne, said the victims included his children and grandchildren.

Ezinne told reporters that what he could remember about the fire incident was the sound from a generator in one of the rooms in the house which happened about 6:30 pm.

The devastated grandfather said that he was sitting outside before he saw his freezer explode and the explosion wounded people around.

“This was about 6:30 pm to 7 pm. About six people died. My son, a woman, the child and the daughter of my wife and one other person,” he said.

Another eyewitness who gave his name as Eric said the incident might have been caused by an electric fault where a refrigerator was connected to a stabilizer.

“I was outside the house just along the road when we heard people screaming fire. Before we got there, everything had happened. We rushed those affected to the hospital, but they didn’t make it,” he said.

Commander of a vigilance group called OSPAC in the area, Godknows Nkem, described the incident as unfortunate, adding that “What happened is very regrettable at this festive period. The loss of six able men and women is unfortunate. I want to use this medium to advise all and sundry to be mindful of all flammable materials, especially this festive period.

“Life is one thing that all of us must guide well. This is the dry season, people should be mindful of what they use, what they keep in their houses, especially flammable materials to avoid disaster."