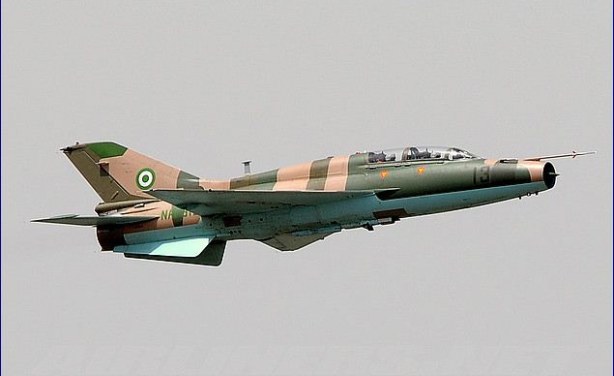 The Nigerian Air Force has neutralized scores of bandits in Niger State.

The Air Component of Operation Gama Aiki (OPGA) bombarded the bandits, giving some abducted civilians an opening to escape.

According to PRNigeria, a Nigerian Air Force (NAF) attack jet killed the criminal elements during air interdictions raid at bandits’ camps in Kusarsu, a community along Abuja-Kaduna highway.

A military intelligence officer was reported to have said credible intelligence had revealed the presence of suspected bandits’ hideout and logistics base at Kusarsu, while the movement of some bandits from Kusarsu towards Kaduna-Abuja Road was also observed, earlier within the week.

The source told PRNigeria that a large number of armed bandits were also gathered at settlements in Gaude and Dutse Magaji.

“Subsequently, Nigerian Air Force (NAF) aircraft under OPGA were scrambled in the early hours of 26 November 2021 to take out the targets.

“Overhead Kusarsu, the NAF combat crew sighted several armed bandits gathered at the locations and subsequently launched a coordinated strike after which the location was seen engulfed in flames.

“The aftermath of the strike also revealed remnants of surviving bandits fleeing the location. It was also observed that about 50 Metres from the target location, several persons suspected to be kidnapped victims were observed escaping out of a makeshift structure and fleeing to nearby civilian settlements.

“Similar strikes by NAF platforms at bandits’ locations in Gaude and Dutse Magaji had the same effects as remnants of the bandits were observed to be scampering from the location.

Other sources told PRNigeria that persons seen escaping from a makeshift structure were indeed kidnapped victims who took advantage of the airstrikes on the bandits’ location to escape.

The bandits operating along Kusarsu axis orchestrated the attack on a train along the Kaduna-Abuja rail track on 20 October 2021.