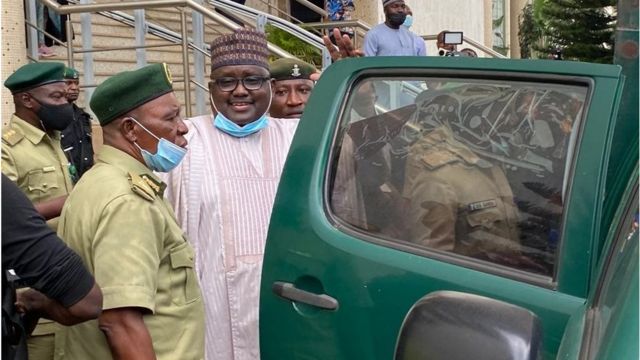 Former chairperson of the defunct Pension Reform Task Team (PRTT), Abdulrasheed Maina who received a jail term for pension fraud to the tune of N2 billion on Monday was aided by banks which youth to be prosecuted along with him, the trial judge Justice Okon Abang says.

Maina was on Monday, November 8 sentenced to eight years imprisonment after a two-year trial

Abang added that the convict’s fraudulent activities “ruined” many homes in the country. He said the two banks ought to have been charged alongside Maina for serving as “conduits” through which the stolen funds were channelled.

In the charge marked FHC/ABJ/CR/256/2019, the Economic and Financial Crimes Commission (EFCC) alleged that Mr Maina used fictitious names to open and operate various bank accounts. He also recruited his relatives that were bankers to operate fake bank accounts through which illicit funds were channelled.

“Fidelity Bank Plc and UBA should have been arraigned with the convict for illegal transactions,” Mr Abang held, adding that “their licences ought to have been withdrawn.”

“The banks benefitted from the proceeds of illegal transactions. UBA and Fidelity Bank provided the channels with which the convict (Mr Maina) used in defrauding the federal government,” Mr Abang also said.

He said the banks abdicated their responsibilities by failing to carry out due diligence to establish the true identities of persons in whose names Mr Maina opened and operated the fictitious bank accounts.