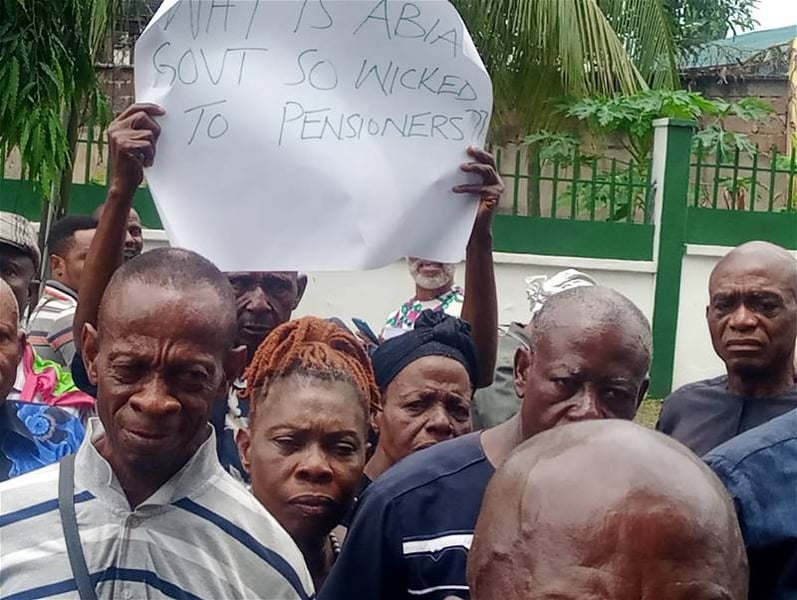 Pensioners in Abia, on Wednesday, protested against the 38 months of unpaid arrears of their pensions by the Abia State Government.

The pensioners, operating under the aegis of Concerned Abia Pensioners, took their protest around the major streets of Umuahia and ended up at the Government House.

They accused the Governor Okezie Ikpeazu-led administration of being insensitive to their health and economic conditions, arising from the lack of funds.

They urged the administration to take serious steps to offset the pension arrears and 20 years of outstanding gratuity.

The News Agency of Nigeria (NAN) reports that they carried placards with different inscriptions, such as “Abia pensioners: Monthly payment for 38 months now” and “Non-payment of gratuity since 2002”.

Others include: “Let governor cut his security vote and pay pensioners”, “Why is Abia government so wicked” and “Stop payment of half pensions”, amongst others.

The senior citizens, many of whom looked pale and sickly, expressed disappointment over the government’s inability to pay their monthly pensions in full.

They also expressed displeasure over the government’s delay in domesticating the Federal Government’s harmonised pensions in Abia.

Speaking at the Government House, the Coordinator of the group, Chief Emeka Okezie, appealed to the government to be sensitive to the pathetic condition of pensioners in the state.

“We have been dehumanised and subjected to unimaginable sufferings.

“The death toll of our members ranges from 10 to 15 persons every month.

“This is due to the unavailability of funds to meet their personal and health needs.

“The issue of non-harmonisation of pensions from 1998 to 2010 should be given prompt attention,” Okezie said.

Responding, the governor said that the state government was making conscious efforts to ensure regular and consistent payment of pensions.

Ikpeazu, represented by the Secretary to the State Government, Chris Ezem, said that pension remained the right of every retiree.
He said that the government was focused on improving their welfare.

Also, the Commissioner for Finance, Dr. Aham Uko, said that a recent forensic exercise conducted by the government on the pensioner's payroll exposed 4,422 irregular names.

“The discovery showed that gratuities attached to the irregular names on the payroll amounted to over N6 billion,” Uko said.

He said that the exercise not only saved the government from wasting its resources but would enable it to pay the genuine pensioners.

He called for collaboration between the leadership of the pensioners and the government to ensure that the irregular names were expunged from the payroll before the gratuity and pensions would be paid.

He promised that the payment of pensions in the state would henceforth be regular.

According to him, some pensioners have started receiving their pensions and by Friday, more would be paid.