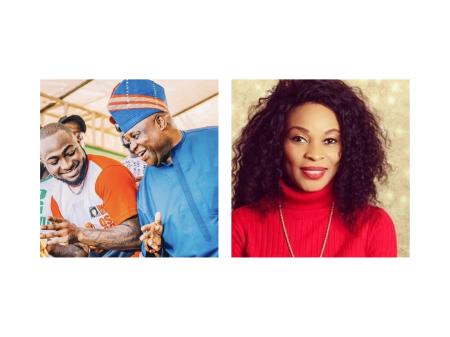 Georgina Onuoha, a Nollywood actress based in the United States, has attacked Davido's uncle, Senator Ademola Adeleke, and his "cronies" for not understanding politics.

This comes after celebrity journalist Dele Momodu shared a video of Ademola Adeleke and his friends on his Instagram page.

Ademola Adeleke and his political associates, including friends, praised God at his Abuja house following the governorship screening session, according to Dele Momodu.

Commenting on the video, Georgina Onuoha expressed her unhappiness with the film, claiming that Ademola Adeleke and his associates had no idea how to alleviate the masses' misery and suffering.

Georgina Onuoha stated that Ademola Adeleke and his associates are only concerned with their stomachs and power, stating that politics should no longer be viewed as a job, but rather as a way of service in which people can keep their regular employment.

I weep for my country. Ask any of these men what their manifesto is to combat the complex issues facing Nigeria, you will be shocked they have zero inclination on how to alleviate the pain and sufferings of the masses. All these are just shows, governance with substance is vital.

These men are thinking of their stomach and power acquisition. Nothing more. Politics should not be a job, rather a means to serve where you still keep your regular job. 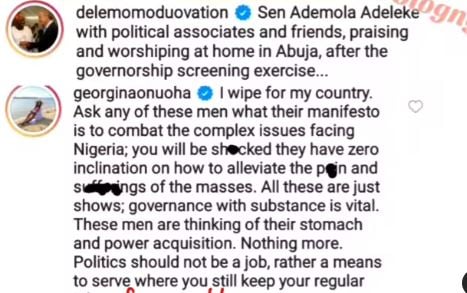