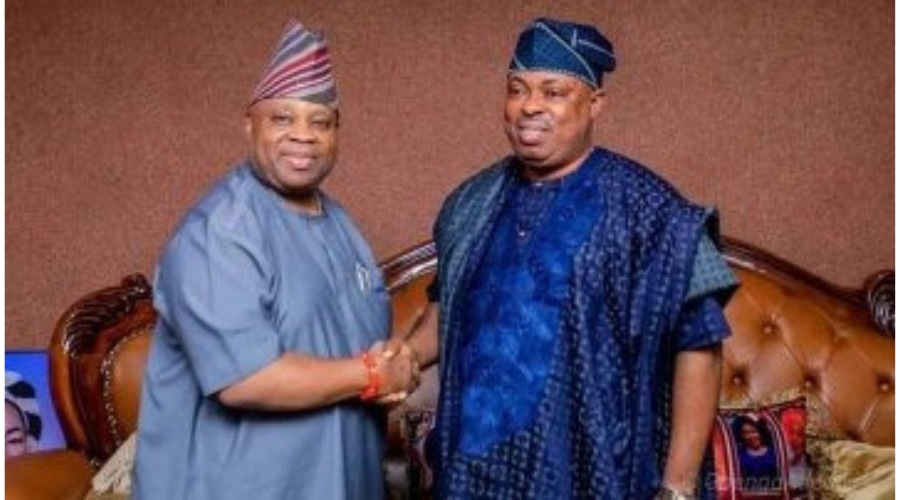 The Osun State Governor, Ademola Adeleke, has met with Speaker of the State House of Assembly, Timothy Owoeye.

The meeting which came up on Tuesday according to reports was held behind close doors.

Also, the meeting was said to have afforded both men the opportunity to discuss issues bordering on the development and progress of the state.

"The legislature is a critical arm of government which plays important role in the efforts to deliver on good governance, accountability and leadership transparency.

"I am a man with passion for the legislature and I restate my readiness to work closely with the legislature to deliver on my five point agenda and take Osun state to greater heights."

Timothy Owoeye disclosed that at the meeting, matters of state importance were discussed.

Owoeye assured the Governor of the readiness of the legislature to support the administration to deliver on its promises to the people of the state.

It had been earlier reported that the Osun Assembly maintained that the description of Osun State as the "State of the Virtuous" still stood.

This decision was communicated via a statement signed by Moshood Kunle Akande, Chairman, House Committee on Media and Publicity on Monday in Osogbo.

The Osun Assembly also announced that while it is aware of a court judgment in effect recognizing "Osun State", the Assembly, pending the determination and exhaustion of all legal means would not be drawn into the matter.

The Osun Governor Ademola Adeleke in his inauguration address on Sunday, November 27, 2022, had renamed the state, Osun State as opposed to The State of Osun and changed its description from "The State of the Virtuous" to "The State of the Living Spring."

"The usage of the State Anthem, Crest and Flag is an enactment of law and as such, its usage is a matter of law and not choice.

"The enactment "State of Osun Anthem, Crest and Flag Law, 2012" assented to on the 18th of December, 2012 contained in Schedule I, II, III, IV and V, which carefully details every component of this law is not in ambiguity.

"Lastly, while we are aware of a court judgment in effect recognizing "Osun State", the Assembly, pending the determination and exhaustion of all legal means would not be drawn into this matter.

"However, the State shall and will continue to be described as the State of the Virtuous (Ipinle Omoluabi)."

Meanwhile, on Tuesday, the member representing Obokun State Constituency in the Osun State House of Assembly, Adewumi Adeyemi in a personally signed statement revealed that the Osun Assembly has not met after the governor's inauguration.

Adeyemi also debunked the claim that the resolution was passed by the Assembly.

While calling on members of the public to take note, he charged his colleagues to work together and support the new government of the day.