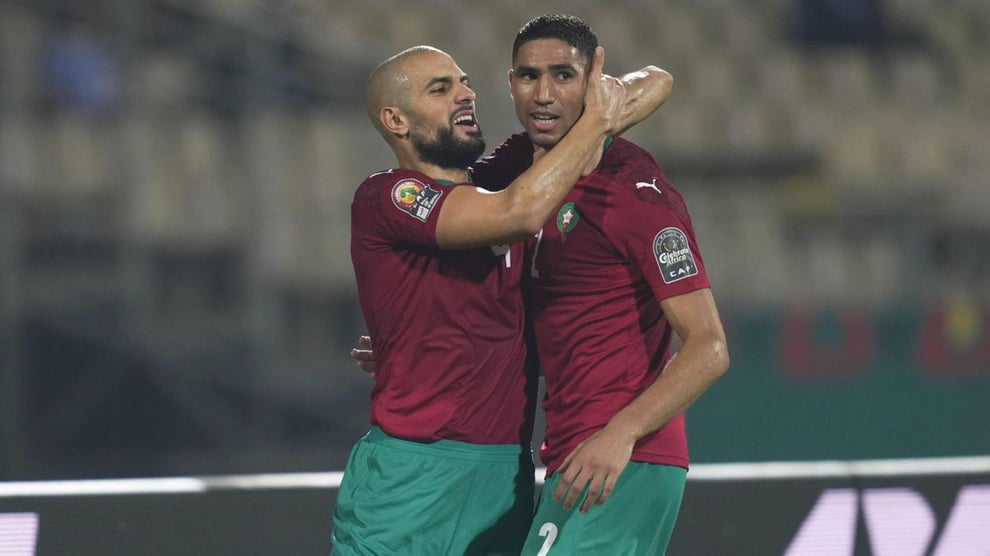 Morocco put forward title credentials as they came from behind to defeat Malawi 2-1 in the Africa Cup of Nations (AFCON) 2022  at the Stade Omnisport Ahmadou Ahidjo in Cameroon on Tuesday night.

Youssef En-Nesyri and Achraf Hakimi scored for the Atlas Lions as they progressed to the quarterfinals. On the other hand, the Flames bowed out of the tournament with Frank Mhango having netted his third goal in the competition, but it prove to be a consolation goal for his side.

The Flames stunned the Atlas Lions when they took an early goal through Frank Mhango just seven minutes into the match. The Orlando Pirates striker noticed that Yassine Bounou had moved out of his goal and he beat the lanky goalkeeper with a sensational curling shot to hand Malawi a 1-0 lead.

Morocco then piled pressure on Malawi as they searched for the equalising goal, but the Southern African side looked dangerous on the counterattack. Mhango ran on to a Micium Mhone through pass and he unleashed a low shot that narrowly missed the target with the Atlas Lions' defence exposed.

This served as a wake-up call for the 1976 African champions who then kept keeper Charles Thomu very busy. The Silver Strikers shot-stopper produced marvellous saves to deny Achraf Hakimi (twice), Imran Louza and Sofiane Boufal, but he was beaten by Romain Saiss's effort which hit the crossbar.

The Atlas Lions did get the goal they had been searching for in first-half stoppage time as Selim Amallah's long ball from the left side was headed home by Youssef En-Nesyri at the back post to make it 1-1 heading into the half-time break in Yaounde.

The Flames did well to contain the Atlas Lions after the restart and Mhango attempted another fantastic long-range shot, but this time Sevilla FC shot-stopper Bounou was well-positioned to make a save as the Malawians fired a warning to the North African giants.

Morocco then upped the tempo and they were awarded a free-kick in a promising area after Gerald Phiri Junior had committed a foul. Hakimi stepped up and beat Thomu with a fabulous strike from the set-piece to hand Morocco a 2-1 lead with 20 minutes left on the clock.

The Malawian technical team reacted by making a triple substitution as they introduced Robin Ngalande, Mark Fodya and Stain Davie with 12 minutes left and the Flames pushed for a late equalising goal in the closing stages of the encounter.

However, Vahid Halilhodzic's side stood firm at the back in the dying minutes of the encounter with Bounou largely untested in the second half and ultimately Morocco emerged 2-1 winners over a resilient Malawi side on the night.