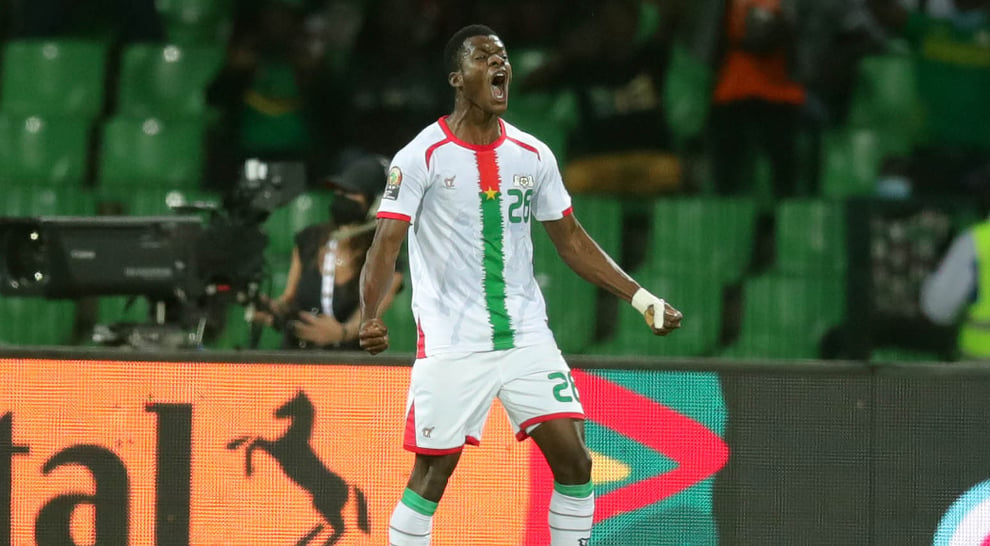 Dango Ouattara's lone goal sent Burkina Faso past Tunisia into the semifinals of the Africa Cup of Nations (AFCON) 2022 at the Roumde Adjia Stadium in Garoua on Saturday night.

The 19-year-old striker netted in injury time at the end of the first half to see the Stallions claim a narrow but deserved triumph, while the Carthage Eagles were unable to produce the kind of inspired play that saw them past Nigeria in the previous round.

Burkina Faso will go on to face either Senegal or Equatorial Guinea (who play each other on Sunday) in the second semifinal on Thursday 3 February. It will be the Stallion’ third appearance in the semis in the past five AFCONs (technically three in four for them, as they failed to qualify for the 2019 tournament).

After a cagey opening quarter-hour, Burkina Faso had the first genuine chance when Edmond Tapsoba’s shot from a free-kick deflected off the wall and fell kindly for Cyrille Bayala, but his low effort was no trouble for Tunisia goalkeeper Bechir Ben Said.

Bayala had a far more dangerous moment midway through the first half when he skinned Mohamed Drager down the Stallions’ left before firing a low shot on goal from a tight angle which required a sharp save with his legs from Ben Said.

On 27 minutes it was Tunisia’s turn to threaten in attack, with Wahbi Khazri firing a powerful effort on target direct from a free-kick, but Burkinabe goalkeeper Herve Koffi turned the shot over the top for a corner kick.

Burkina Faso continued to enjoy some strong forays and on 40 minutes they created an opening for Djibri Ouattara, but his left-footed volley was comfortably saved by the Carthage Eagles ‘keeper.

The first half looked set to end goalless, but in injury time before the interval, the Stallions claimed the lead: Blati Toure played a fine through ball to set Dango Ouattara free down the right flank, before the attacker cut inside of defenders Oussama Haddadi and Dylan Bronn and fired home a left-footed shot.

The West Africans should have doubled their lead six minutes after the restart when a fast-paced counterattack set Bayala free down the right of the penalty area, but his shot from a tight angle was blocked by Ben Said to keep Tunisia in the contest.

The North Africans spurned a great chance to level the game on 57 minutes when substitute Naim Sliti drove a dangerous ball into the box which picked out the run of Khazri, but the attacking midfielder fluffed his attempt to get a shot on target.

Eleven minutes later another Tunisia substitute, Ali Maaloul, had a shot on target direct from a free-kick, but Koffi made a diving save to keep Burkina Faso in the ascendancy.

The Stallions were dealt a major blow with just under 10 minutes to play when Dango Ouattara was sent off (after a VAR review) for elbowing Maaloul in an aerial challenge, leaving them a man down and under siege for the remainder of regulation time.

However, the Burkinabe defence stood firm in the face of wave after wave of Tunisian attacks and ultimately held out to seal a place in the final four.