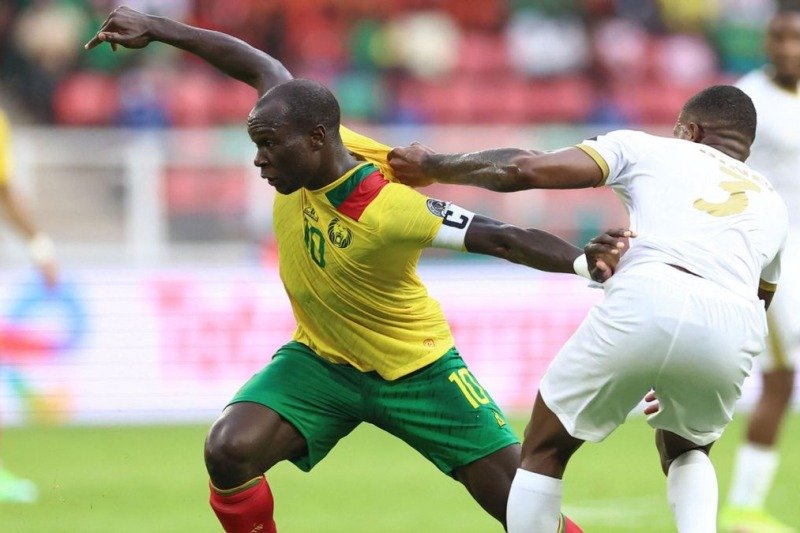 Host Cameroon rounded up their Group A campaign at the Africa Cup of Nations (AFCON) 2022 with a 1-1 draw against Cape Verde at the Olembe Stadium in Yaounde on Monday evening.

The result, secured by goals from Vincent Aboubakar and Garry Rodrigues, sees the Indomitable Lions miss out on a 100 per cent record but still finish top of the group, while the Blue Sharks came home in third and will have to wait to see if they advance into the round of 16 as one of the top-ranked third-place teams.

Vincent Aboubakar tops the scorer's chart with 5 goals in 3 matches for the host and looks in line to win the top goalscorer for the competition.

Cameroon created some early pressure and were close to a spectacular opener in the 17th minute when Collins Fai’s deflected cross from the right flank fell for Vincent Aboubakar, who sent a volleyed effort just off target from the edge of the penalty area.

Cameroon number 17 was in action again on 33 minutes, holding off a defender before turning and unleashing a long-range grass-cutter that looked destined for the bottom corner but was tipped away for a corner kick by Cape Verde goalkeeper Vozinha.

For Aboubakar it was a case of third time lucky, as he broke the deadlock on 39 minutes: an Indomitable Lions free-kick was only half-cleared by the Blue Sharks defence and the striker latched onto the loose ball and drove a low, left-footed shot into the back of the net to put the hosts in control.

Cape Verde responded well to going behind and created some significant pressure leading into halftime, but Cameroon were able to hold out and ensure they enjoyed a one-goal advantage at the interval.

The Islanders opted for a change at the start of the second half, withdrawing Lisandro Semedo and replacing him with Garry Rodrigues in an effort to spark their attack to life.

And the substitute proved his worth with a superb finish from close range in the 53rd minute, allowing Rocha Santos’s low pull-back from the right by-line to pass through his legs before using the inside of his right foot to flick the ball beyond goalkeeper Andre Onana for 1-1.

Cameroon should have reclaimed the lead on 66 minutes when Vozinha palmed a cross from the left into the path of Aboubakar, but the captain fired over with the goal at his mercy.

The hosts pushed for a winner in the dying minutes, but Cape Verde were able to see out a draw with the heavyweights and give themselves an anxious wait over the next three days to see if they join the Indomitable Lions in the Afcon knockout phase.

Cameroon, as Group A winners, will face a third-place finisher from Group C, D or E at the Olembe Stadium on Monday 24 January in the round of 16.