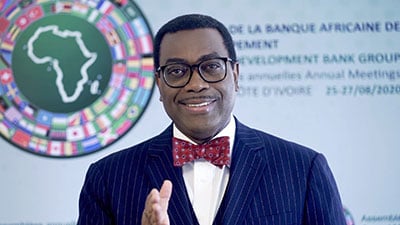 Akinwumi Adesina, the President of the African Development Bank, has warned that many African countries may face food riots and political crises due to the war in Ukraine.

In an exclusive interview with The Telegraph, he warned that worse was about to hit the African continent following the ongoing war in Ukraine.

Adesina, fearing that the war was going to have even greater implications for world trade, pleaded with both countries to put an end to the war.

"This war has to come to an end. It’s not just a war in Ukraine. It’s a war that has global ramifications.

"The price of wheat has gone up by 62 percent [since the beginning of the war].

"The price of fertilizers, which are very, very critical for food production, has gone up by 300 percent – that’s three times. "

"And when you couple that with energy prices that are also rising in many African countries, you can see that this is driving inflation.

"If urgent action is not taken, it could lead to a food crisis in Africa. "

According to the respected Nigerian economist who has led the African Development Bank for the past seven years, the war is beginning to have serious political ramifications for many African countries due to its negative impact on basic food and energy prices.

He made this remark while taking into account that the continent is heavily reliant on cereal imports from Ukraine and Russia.

He also mentioned the impact the COVID-19 lockdowns had on food production, and he predicted that, with the ongoing war in Ukraine, many African countries would face social and political uprisings as a result.

"That keeps me very worried. We may have some food riots because people can’t survive like that. "

"We saw what happened in Tunisia. The Arab Spring came just because of that.

"If we don’t bring the prices down very quickly, it creates a risk of fragility in already very tense political situations in many African countries."

He also said that the increased price of liquefied gas would push more Africans to return to cooking with charcoal, which is far more polluting and tremendously damaging to their health.

He further stressed the need for financing Africa's food sufficiency.

The World Food Prize winner, on the other hand, argued that Africa was more than capable of looking after itself, but that it needed to invest heavily in increasing agricultural production.

"We have what it takes. We need financing to feed Africa and avert a food crisis, "Adesina said.

He cited one of the bank's flagship programs, which significantly increased food supplies in seven African countries.

Dr. Adesina claims that simple methods such as delivering heat-tolerant wheat varieties to farmers increased wheat production per hectare by about 75% in Sudan and 26% in Ethiopia in just two years in the target areas.

According to African Development Bank data, this allowed Ethiopia to cut its wheat imports by more than half.

"We've got what it takes. "We need funding to feed Africa and prevent a food crisis," Dr. Adesina says.

"We were unprepared when Covid-19 struck. But we are prepared for this."