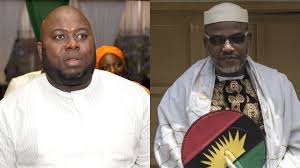 The leader of the Niger Delta Peoples Salvation Force (NDPSF), Asari Dokubo has once again lashed out at the leader of the Indigenous People of Biafra (IPOB), Nnamdi Kanu, accusing him of terrorizing southeast residents.

Dokubo said that people in the southeast obey the sit-at-home order by IPOB out of fear of being killed.

IPOB has however repeatedly denied that its members are behind the attacks, and asked the governors of the region to 'deal decisively with' anyone caught enforcing the suspended directive.

Speaking on Sunday during a Facebook live, Dokubo accused Nnamdi Kanu, leader of IPOB, of causing the closure of schools and businesses in the southeast.

He added that people only obey the order out of fear of being killed, and not because they love the Biafra leader.

“IPOB is worse than a terrorist organization. It is a satanic movement. They tell them to eat the flesh of human beings, and they eat it.

“People are afraid of being killed that’s why they’ve continued to sit at home, not because they love Nnamdi Kanu. Why is there no sit-at-home in Port Harcourt, Calabar, Uyo? It is because the government of these places is saying ‘don’t ever come here'.

“Very soon, Igbos will come out and say ‘it is okay; our old women are starving; they can’t go to the farm, markets’. At Onitsha market, people are afraid of doing businesses because they are scared of being killed.”

Dokubo also said contrary to accusations by IPOB, he did not betray Kanu in relation to the latter’s arrest in Kenya.

“I don’t know where Nnamdi Kanu was living, I don’t know where he took off from. They said I was the person who gave him up. You accused me of betrayal. I am not a member of your organization. We are enemies. What do enemies do? They fight and kill each other until there’s a platform for reconciliation.”