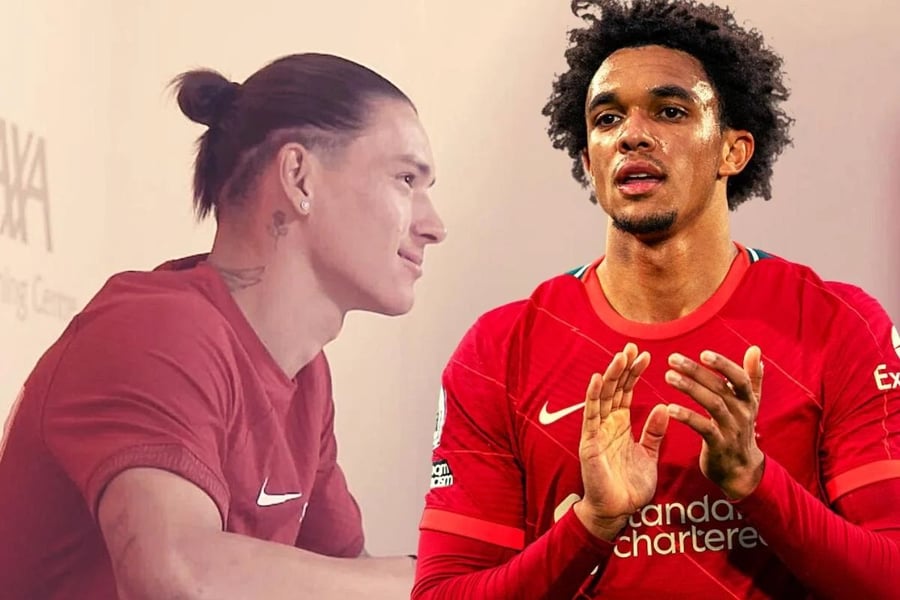 Liverpool right-back Trent Alexander-Arnold has welcomed Darwin Nunez to Anfield with a tweet that would send shivers to defenders across Premier League and Europe.

The tweet on the other hand will surely make Liverpool fans happy.

Nunez, 22, is one of Europe's most coveted strikers following a remarkable season for Benfica that boasted 34 goals in 41 appearances. The Uruguayan striker had been linked with Manchester United but it was Jurgen Klopp's side who would seal an £85 million deal.

Alexander-Arnold has had a scintillating campaign for the Reds, managing 19 assists in 47 appearances.

He reacted to Nunez's arrival by tweeting:

"Welcome to Liverpool! (Darwin Nunez) How may I assist you?"

Welcome to Liverpool! @Darwinn99 How may I assist you? ? pic.twitter.com/YvuzVJBfvg

The duo could become one of, not only the Premier League's most fearsome duos in tandem with one another, but also in Europe. The English right-back has had great success working with the likes of Mohamed Salah and Sadio Mane as he bombs forward for Jurgen Klopp's side.

Now that Nunez has joined the frightening frontline at Anfield, Reds fans can expect more goals.

Liverpool will be looking to put right their demoralizing end to the season which saw them just miss out on an unprecedented quadruple. Klopp's men had already claimed the FA Cup and the Carabao Cup heading into the final day of the Premier League season.

Liverpool have had one of Europe's most desired frontlines throughout the 2021/2022 season. The likes of Mohamed Salah, Luis Diaz and Diogo Jota have flourished under Jurgen Klopp.

Sadio Mane looks likely to be departing Anfield for Bayern Munich (per Daily Mail) paving the way for Nunez to try and nail down a starting berth.

Here was his reaction to joining the Reds (via LiverpoolEcho):

"There are some top, top players here with great qualities. There is Firmino, who's a great player, and then Jota, who is another great striker. Luis Diaz, Salah.

"To play alongside these 'monsters' is going to be something really special for me, because as a kid you dream of going far and I dreamt of being able to play in Europe, but I didn't expect to get as far as a great club like Liverpool."
He added:

"There'll be a lot of competition between the forwards here, but it will be healthy competition. I'm still only 22 and I've got lots that I can still learn, and this is a brand new experience for me."