All You Need To Know About Death Of Dowen College Student 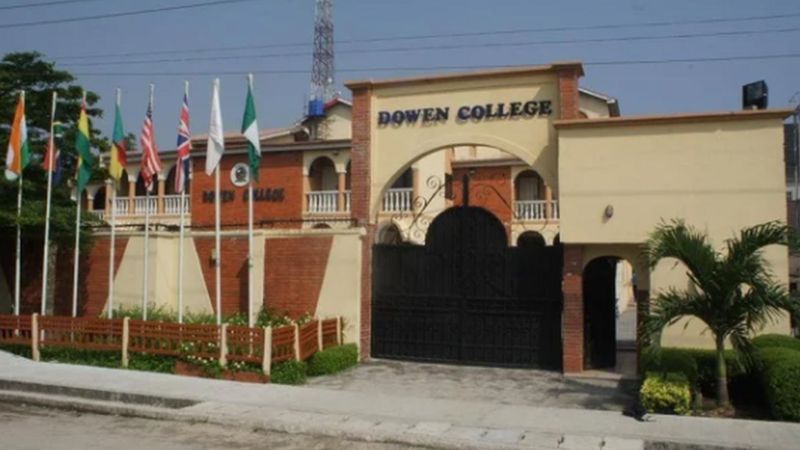 More facts have emerged about the sudden death of 12-year-old Sylvester Oromoni, a student of Dowen College, located in Lekki area of Lagos State.

AllNews Nigeria earlier reported tha Sylvester Oromoni was allegedly murdered by an alleged cult group who have been identified as students of Dowen College  for refusing to join the fraternity.

Sylvester was admitted in a Lagos hospital on Friday following the attack and confirmed dead on Tuesday.

“My son suffered. His birthday is next tomorrow (December 4). I’ll celebrate it. I’ll have a cake baked. I’ll cut it on his behalf.

"The boys, they mentioned were also reported to the school last term when they bullied Junior and collected all his foodstuffs; clothes.

"I have two daughters, one of whom earlier graduated. I had to remove the second after this incident. They asked this boy to describe the sister’s privates and this got to us.”

Oromoni’s family said Dowen had temporarily suspended the boys involved after the family’s eldest son took it up. He said Junior was also switched to a new hostel but the bullying and intimidation persisted into the new term.

“They put fear in him so much so that, when you ask him, he might keep to himself and say, ‘they will kill me’. This way, we didn’t know what to do.

"I considered removing him reconsidered since his sisters were still in the school. The new incident came to my knowledge on November 21st after the school called my wife to notify us that our son was in the school clinic, injured.

"My senior son, who was to make a London trip, came to see us in Warri,” he said. 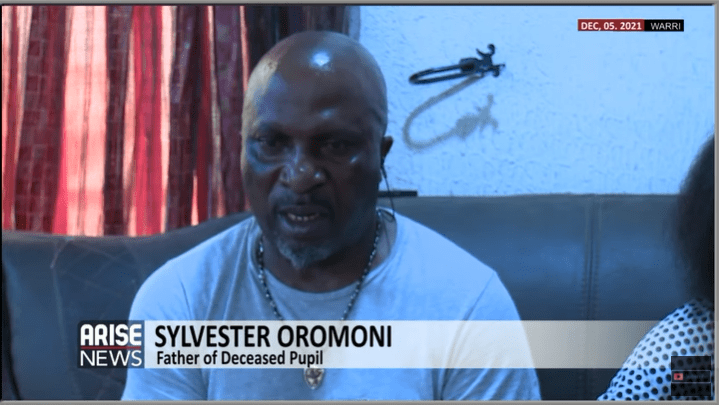 Syvester Oromoni's father“The next day, we sent a family friend to help pick up our son since he was the only person in Lagos and take him to the hospital.

"When he got there, he panicked, pointing out that he doubted it was a football injury as the school claimed. He said the boy couldn’t stand because his waist was bent and swollen along with one side of his belly. His mouth was black.

"I asked, ‘Is this really a football injury?’ He was taken to my house in Lagos but couldn’t sleep at night.

“I asked my eldest to fly to Lagos on November 24 while I took a trip to Asaba from where I’d also make for Lagos. On getting there, he screamed. ‘This is beyond football injury. Come to Lagos now,’ he told me over the phone.”

A dormitory mate of late Sylvester Oromoni revealed how he was tortured by senior students at Dowen college.

The eyewitness said, "Sly got beat up on Saturday 27th of November by the boys that was named and the ring leader was Favor, Aslem and Micheal is more of a follower.

"I was in the room the day they came in.

"Sly was on his bed and we were just talking and playing in our hostel room as usual after we clean. At about evening time the senior boys came in and senior Favor switched of the light they were holding their belt with them

"They were not 5 but 6 senior boys but I don't know who exactly was part of the beating but I know senior Edwin was there for sure.

"They beat him up and he fell from his bunk and after they were done they called us back to the room and aslem said the school rules piss him off and if we snitch the way sly did them would do even worse to us. Sly was still on the ground and favor kicked his head again before they left.

"In the morning on Sunday sly was on his bed and he complained that he couldn't walk so the senior called us to their room and said if we snitch they would know and that if they ask us what is wrong we should say he played football.

"The dorm master knew there was a beating that occurred so I don't understand why they are lying on the internet that he wasn't aware.

"Even the following morning sly went to the sick bay and it was obvious he was beaten and because no football can break bones and moreover that week we didn't have or play football or sport activities.

"I can't sleep so I decided to speak the truth everything sly said before he died were the truth. We didn't know he was dead till we were sent home and picked by our parents

"They told us he was getting withdraw from the school

"This is not the first case that has happen in Dowen they always hid and cover it up the junior student are not always protected by the teachers or principal if we report annoymously they would make us suffer for reporting."

The Dowen College management has denied claims that the 12-year-old boy was beaten to death for refusing to join a cult group.

According to the statement, one of the school’s hostel officials had informed the management on November 21 that the student was injured while playing football with his colleagues.

The school said he was given first aid treatment by the resident nurse and thereafter returned to his hostel after he expressed relief.

It added that the next day, the student started complaining of pain in his hip and was again attended to by the resident doctor at the school’s sick bay.

The school said the doctor later called the student’s mother to inform her of the situation and also asked her to pick him up for further medical treatment.

It claimed that after an initial delay, the student’s mother eventually sent a guardian to pick him up and subsequently took him for an x-ray.

The statement added that the guardian would later call to inform the school that the results of the x-ray showed no part of the student’s body was injured or broken.

It also said it was unfortunate that several claims have been making the rounds on social media platforms about how the student died.

The statement added that the school’s preliminary investigation showed that the students allegedly mentioned by the deceased were not connected to the incident.

The school said as a faith-based college, it vehemently condemns cultism and other social vices.

Social activist and former presidential aide, Reno Omokri said; "The Nigerian Immigration Service ought to put suspects in the murder of Sylvester Oromoni, and staff of Dowen College, on a no fly list. In fact, their passports ought to be temporarily seized pending investigations! If any suspect sneak out, NIS is to blame #Justiceforsylvester"

Former Minister of Education and Oby Ezekwesili said the news of the death of Sylvester Onoromi is "too heartbreaking."

"Too heartbreaking. Which word can one even use to comfort the parents of #Justiceforsylvester. None really, except pray that the good Lord holds dem in his arms with deep love."

Sally Suleiman said, "Let’s not forget Sylvester. Let’s not get tired of asking for justice. This cannot be swept under the carpet. Let’s make it unbearable for Dowen College. Injustice to one is injustice to all! #Justiceforsylvester"

Nwulu Kelechi @kelechinwuluu said, "What is going on? Another day and the school is just locked? No victims or staff have been questioned. I heard one of the culprit’s parents flew him abroad. How can we get justice for Sylvester?It is not enough to lock down the school. We want Actions! #Justiceforsylvester".

Call Their Names ??? Gods Of Justices Should visit The Corridor Of Their Home #Justiceforsylvester pic.twitter.com/BIma0mo1TP

Following an indefinite Shutdown of DOwn College by the Lagos State Commissioner for Education, Mrs. Folasade Adefisayo, the State's command spokesman Adekunle Ajisebutu said although no formal report has been made yet, Hakeem Odumosu, the commissioner of police, has ordered investigation into the matter.

“The Lagos State Police Command is not unaware of the reported death of one Sylvester Oromoni, a 12-year-old student of Dowen College, Lekki, Lagos, which is currently going viral on the social media,” it reads.

“The Commissioner of Police, upon hearing about it, instantly directed the Divisional Police Officer, Maroko Division, under whose jurisdiction the place of incident is, to immediately visit the school to carry out initial investigation into the incident.

“This directive has been carried out as investigation into the case has since commenced.

The police spokesman enjoined members of the public to avoid taking laws into their hands, adding that the command is determined to get justice for the deceased’s family.

“Members of the public, particularly the deceased’s bereaved parents, friends and relatives, are assured that the Lagos State Police Command has deployed all available human and material resources at its disposal to unravel the circumstances surrounding the sad and unfortunate incident,” it added.

“While diligent investigation is ongoing, members of the public are advised against taking the law into their own hands. They are also enjoined to refrain from comments that could jeopardize investigation.

“The Commissioner of Police, CP Hakeem Odumosu, while commiserating with the bereaved family, has equally assured that the outcome of police investigation would be made public in due course.”