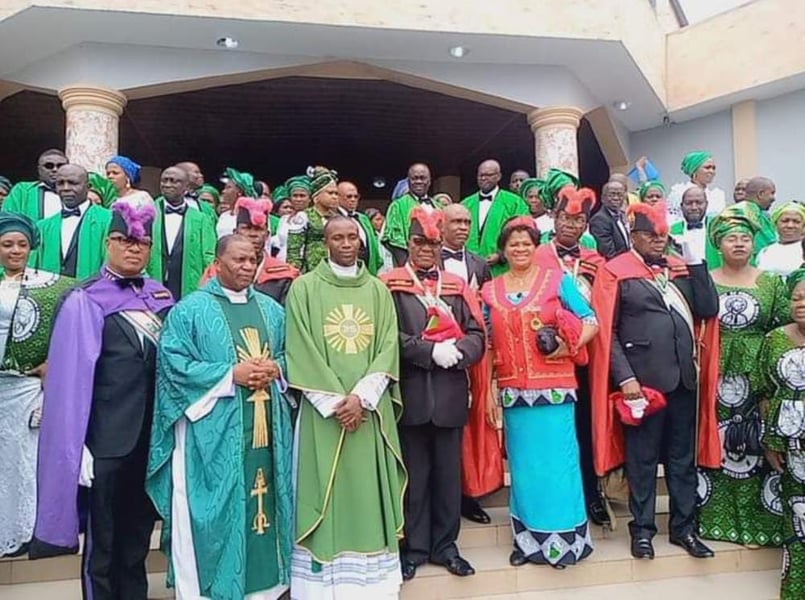 Igwe Johnmark Anyaoha, the traditional ruler of Ogbunka community in Anambra State has been admitted into the first degree order of knighthood of Saint Mulumba, Onitsha Metropolitan Council.

Igwe Anyaoha took the oath of allegiance to the order during a holy mass at Saint Thomas Aquinas Catholic Church, Awka.

The Ogbunka traditional ruler will represent Akpu Sub-Council of the order.

The Knight of Saint Mulumba, founded on June 14th, 1953, is the first indigenous knighthood order in Nigeria.

In a homily during the holy mass, the Metropolitan Chaplain, Knight of Saint Mulumba, Onitsha Metro Council, Reverend Father Paschal-Paul Okeke said that contrary to some wrong notions held about Catholic knighthood, it is a strong pillar of the church, and can, aside being involved in charities, mediate in matters of the church outside the authorities of priests and bishops.

Reverend Father Okeke, however, urged the new entrants to defend and spread the the doctrines of the Catholic church, as well as the gospel of God, and be faithful to the Order and church.

In an interview, the Metropolitan Grand President, Order of the Knight of Saint Mulumba, Onitsha Metro Council, Sir Boniface Orakwe said that with their admission, the new members have become soldiers of Jesus Christ and the church.

He said that such event is usually done in the evening and not necessarily during a holy Mass before the blessed sacrament, but that the current fixture was changed to allay certain misconceptions about knighthood.

On his part, the newly-admitted member of Order of Knight of Saint Mulumba, Nigeria, Igwe Anyaoha said that as a knight of the church he looked forward to greater responsibilities, and to unite Ogbunka as a community under God's watch.

Igwe Anyaoha also stated that he felt happy to have been admitted into the noble association, and promised to stick to its obligations and responsibilities.

With his official admission into the Order of Knight of Saint Mulumba, Igwe Sir Anyaoha is granted automatic passage to partake in the activities of twenty-five other Orders across the world.