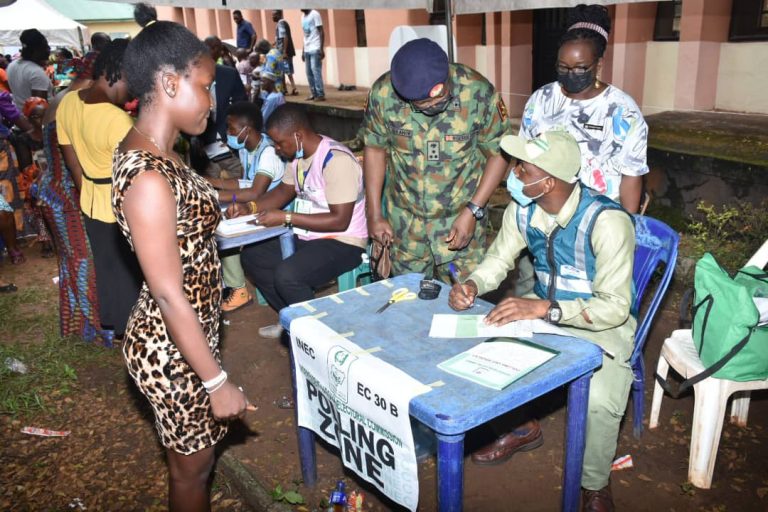 Ibrahim applauded the corps members while monitoring the election in nine local government areas of the state.

In a statement signed by Adenike Adeyemi, the NYSC Director, Press and Public Relations, Ibrahim described the corps members’ participation in the electoral process as “patriotic”.

He however urged the corps members to remain impartial and perform their duties in line with established rules.

“The corps members have written their names in the annals of history, having contributed towards the entrenchment of a credible electoral process.

“I urge them to remain impartial and perform their duties in line with the established rules.

“In all the polling units I visited, there were security agents on ground, and the corps members informed me that the conduct of the exercise was peaceful,” Ibrahim said.

No fewer than 5,000 corps members were deployed by the scheme to serve as polling officers during the conduct of the elections in the state.

The NYSC director-general visited polling units across the 21 LGAs of the state to monitor and ensure the safety of corps members working in the areas.

In an earlier interview with NAN, the NYSC Director of Press and Public Relations said that once corps members are sworn in for the one-year mandatory service, their security remains a top priority for the scheme.

Adeyemi assured that proper arrangements have, therefore, been made to ensure the safety of corps members deployed for the Anambra governorship election.

“The synergy between the NYSC and security agencies is always ongoing and quite effective. This synergy ensures that the security of corps members is maintained during the orientation, during the service year, and also on election duties.

“NYSC and the Independent National Electoral Commission (INEC) interface regularly, before, during, and after election,” Adeyemi said.