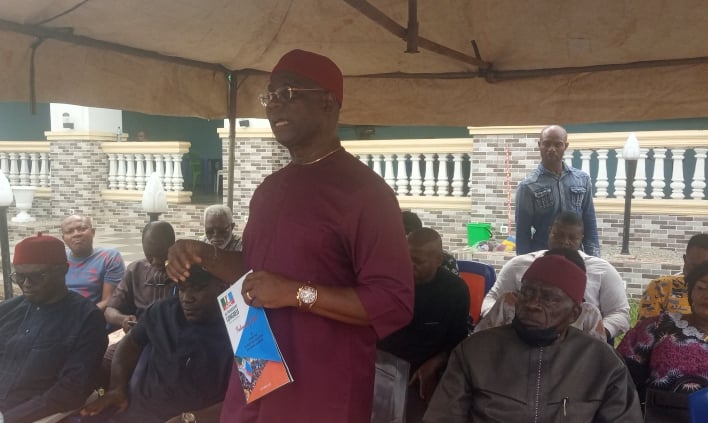 Enugu West Chapter of the All progressive Congress (APC) has disowned the factional chairman of the party in the state, Ugochukwu Agballa, insisting that he is not a registered member of the party.

Agballa, who hails from Udi Council area of the state in Enugu West Senatorial district had joined the party in July, three months before what turned out to be a rancourous  state congress which produced two state chairmen in the state.

Agballa was declared winner of the congress which has the backing of the Minister of Foreign Affairs, Geoffrey Onyama, Senator Ken Nnamani and Former Governor of Enugu State, Sullivan Chime.

On the other hand, Mr Adolphus Udeh was declared winner of the faction backed by the immediate past chairman of the party in the state, Ben Nwoye.

However stakeholders of the party in Enugu West Senatorial Zone who are in the same faction with Agballa after a zonal working committee meeting yesterday, discredited the process which produced the former commissioner for works in the state as their chairman.

A communique made available to journalists at the end of the meeting, read thus: "we are APC stakeholders from the five local government areas of Aninri, Awgu, Ezeagu, Oji River and Udi, making up Enugu West Senatorial District.

"That having watched with disgust and disappointment the intentional efforts of disgruntled elements in APC within and outside our Senatorial zone, in the past several weeks, to destroy APC in  Enugu State, we met today.

"That after an exhaustive discussion and review of the illegal and unconstitutional events of 16th October, 2021 where a sham took place in the name of a purported APC State Congress,  we want to state as follows;

"That prior to the date of the scheduled congress, the stakeholders and party members of the APC in Enugu State pursuant to Article 20 (i)(a) of the APC Constitution, held series of meetings for purposes of zoning and possibly agreeing on candidates for the election by consensus.

"That the stakeholders at the meeting, after considering and adopting the micro-zoning of the offices, considered the candidates for the various positions for the election with a view to agreeing on consensus candidates.

"Following the step down of the other candidates for the office of the Chairman and after deliberations by the stakeholders, a former Military Governor of Gombe state, Group Captain Joe Orji was unanimously adopted as the consensus candidate for the office of State Chairman.

"The said Ugochukwu Agballa was a member of the PDP, a rival political party in the State as at the second week of July, 2021, when he publicly indicated intention to join our dear party as a member and by which time the revalidation and registration exercise of members and new members of the party had been suspended pending the conclusion of Congresses and National Convention.

"That the said Ugochukwu Agballa purportedly obtained an old discarded membership card slip which was backdated and attached same to his nomination form.

"The said Ugochukwu Agballa is not a registered member of APC and therefore lacks the right to vote or be voted for into any of the elective positions of the Party.

"That the said Ugochukwu Agballa is not a registered voter and does not have INEC Voters Card."