APC Reschedules Zonal Congresses To Be Part Of National Convention 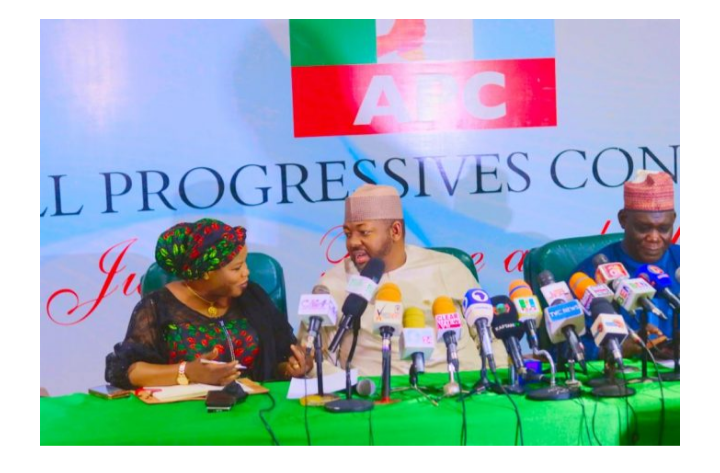 The All Progressives Congress (APC) Zonal Congresses earlier scheduled for March 12, 2022 is now going to be part of the National Convention slated for 26th of the same month.

The APC Youth Representative and Spokesperson of the Caretaker/Extra-ordinary Convention Planning Committee (CECPC), Barr. Ismaeel Ahmed and Mary Noel-Berje,Chief Press Secretary to the Governor of Niger State disclosed this on Friday at the National Secretariat of the party in Abuja, during a press briefing on the activities of the CECPC.

The Youth Representative and spokesperson of the CECPC of APC said 35 State chairmen of the party and that of the FCT were sworn in and tasked to work towards ensuring unity amongst party members in their respective states as well as mobilise them for victory in the 2023 general elections.

He said the CECPC also received and adopted the report of the zoning committee after it was deliberated upon exhaustively, adding that the zoning formula has been made public.

Barr. Ahmed also recounted that specific roles were assigned to members of the CECPC in line with the existing Directorates at the Party’s headquarters, explaining that it was to ensure synergy between the leadership of the party and the directorates as well as expedite actions in preparations to the March 26th National Convention.

"The CECPC of the Party described the judgement of a Federal High Court, Abuja, which sacked the Ebonyi state Governor, Deputy and state legislators for defecting to APC as a travesty of justice and encouraged them to appeal the judgement assuring them of support.

"During the week, inaugurated Convention Planning Sub-Committees following adjustments made on the initial number of members of the Sub-Committees without undermining anyone but for the best interest of the party bearing in mind that everyone must not be a sub-committee member."

He also recalled that the CECPC under the leadership of the Acting Chairman has issued a notice of meeting of the National Executive Committee NEC of the party  slated for Thursday, 17th of March, 2022.