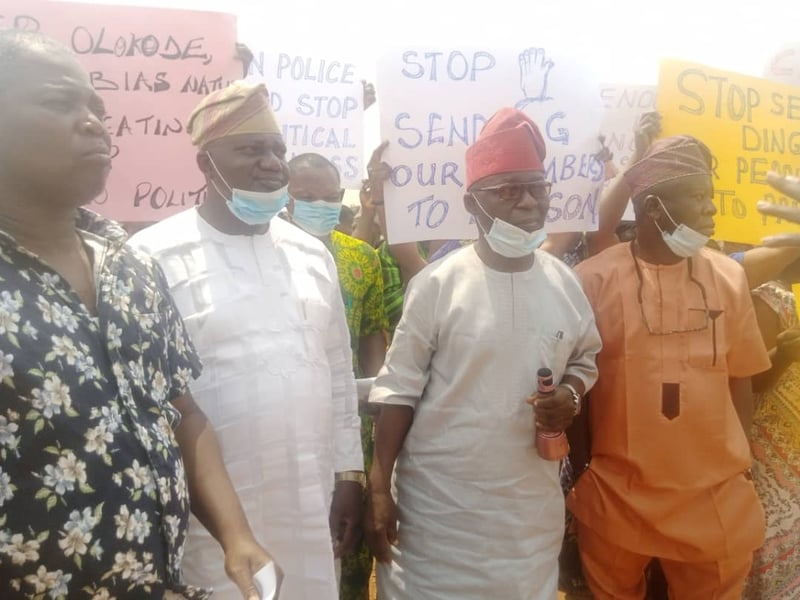 The protesters were protesting against the attack on the convoy of Rauf Aregbesola, the Minister of Interior in Osogbo on Monday evening.

The protesters were led by Rasaq Salinsile, the Osun APC factional Chairman and Adelowo Adebiyi, the Chairman of The Osun Progressives (TOP).

While addressing the media, Salinsile stated that the position of the Osun police command on the attack was absurd and unbelievable adding that as bonafide citizens of Osun, it was becoming impossible for citizens to live under the protection of police in the state. 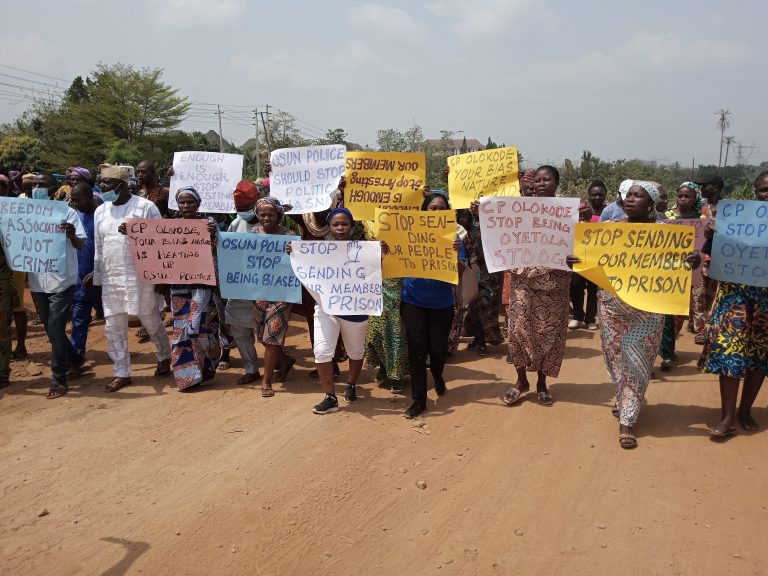 In his words, “We found your Command’s position on the attack on the Minister for Interior, Ogbeni Rauf Aregbesola contained in the press release of February 15, 2022, absurd, disturbing and unbelievable.

“As bonafide citizens of Nigeria and the socio-political environment called the State of Osun, we put on record once more that you are incapable of living up to the billings of your core duty as protector of lives and property of all citizens."

Meanwhile, the Osun Police Command had earlier warned against any form of protest in any part of the state.

In a press release signed by Yemisi Opalola, the Command Police Public Relations Officer, it was revealed that the command had been availed of intelligence that clandestine plans were on by some group of people to embark on the protest which is scheduled to hold on Wednesday, February 16, 2022.

While noting that the police frowns at any form of protest under any guise even as elections are around the corner, the command called on individuals and groups planning such and their sponsors to jettison it as it was fully prepared to use all legitimate means to avert such protest.

The command held that allegations and counter-allegations were expected but the police being apolitical will discharge its duties without bias.

"War-mongers, troublemakers, persons, groups or groups intending or planning to cause, create or execute any act of violence before, during and after the primary/gubernatorial elections should, in their interest, leave the State quietly and peacefully.

"The Police and other security agencies in the State will secure a level playing ground for all political parties, politicians and all the eligible electorates to exercise their franchise while we will not hesitate to deal decisively and within the ambit of law, with anyone, group of persons who attempt to foment trouble and in the process disrupt the smooth conduct of the elections.

"Though all allegations and counter-allegations are not unexpected, it is pertinent to state here, that the police is apolitical, and we will discharge our duties without bias or favour to any person or persons regardless of their political affiliation."

The release also urged the citizens to go about their lawful activities but appealed to parents and guardians not to allow their wards to used to foment trouble in the state.