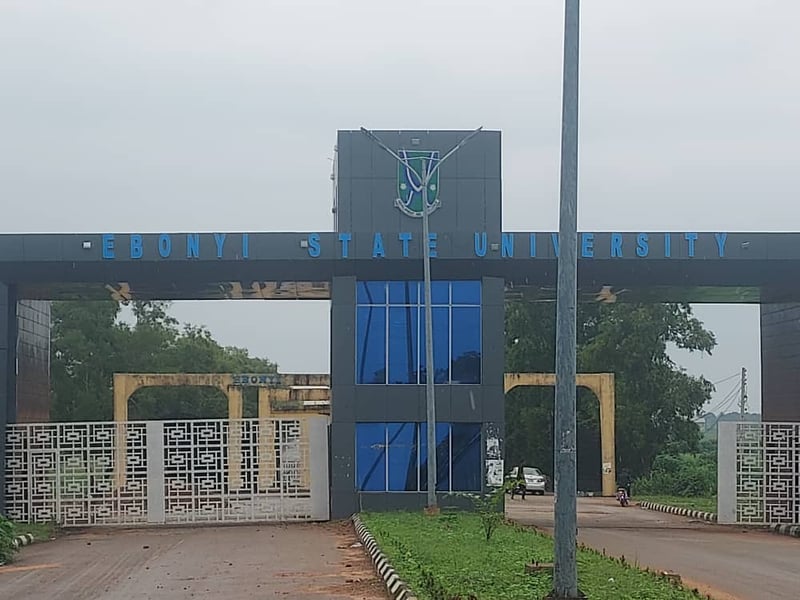 The Ebonyi State University Chapter of the Academic Staff Union of Universities (ASUU) has protested the outstanding salaries of its lecturers, saying the current administration is insensitive to the needs of workers.

ASUU members received full payment for November but disclosed that the eight-month withheld salaries by the federal government remain unpaid.

The recent development has sparked outrage among members of the union, with the chairman of the UNN branch Comrade Christian Opata accusing the government of being unserious with the education sector.

Addressing journalists on Thursday at the Alex Ekwueme Federal University, Ndufu-Alike Ikwo, Ebonyi State, the Chairman of ASUU-EBSU, Igwenyi Ikechuku, stated that the federal government is intentionally undermining the relevance of his colleagues in their effort to restore sanity in the nation’s university system.

“ASUU suspended the national strike on October 14, 2022, in obedience to the Court ruling, with profound faith in the interventions of well-meaning Nigerians.

“Today, comrades from Ebonyi State University branch of our irrepressible Union have joined our members all over the nation in a sub-zonal protest match from Alex Ekwueme Federal University, Ndufu-Alike Ikwo to condemn the poor attitude of the Federal Government of Nigeria to fund tertiary education and the deteriorated and out-of-date conditions of service of University lecturers since 2009.

“As men of integrity with a profound trust in humanity, ASUU without insisting on documented agreement suspended the strike only to be “appreciated” with a pro-rated salary structure without recourse to the conditions of service and the fact that public/civil service is pensionable in Nigeria.

"Workers in Nigeria are paid monthly and are engaged as such.

"During the COVID-19 pandemic, over 80 per cent of civil/public servants were at home, yet paid full salaries.

“Many agencies and departments are redundant and many Representatives of the people are obviously absent from sittings, yet are not paid on pro-rata but paid full compliments of their remunerations.

"It is only ASUU that the Federal Government of Nigeria desires to convert their service structure to casual employment like in the Western world where people are engaged and paid based on time input, simply because ASUU is asking for the legitimate right of Nigerians to quality, competitive and functional education.

“Strike is a legal tool that is invoked when workers collectively agree to withdraw certain services to attract employers’ attention to deteriorating conditions of service that affect both input and output.

"It is a legitimate bargaining tool all over the world and when workers are on industrial action, work is done because strikes, meetings and negotiations are part of the work done.

“Meanwhile, the strike action embarked upon by ASUU on February 14, 2022, had a time frame of four weeks, which was adequate for the resolution and implementation of the renegotiation, if there was the political will to do so.

"Due to the insensitivity, infidelity and irresponsiveness of the government, it was allowed to linger unnecessarily.

“The Federal Government of Nigeria has always brought distractions and blackmail whenever ASUU kicks to bring FGN to the table.

“At the height of each negotiation, Federal Government through its agencies and proxies will deliberately collaborate with external influences to perpetuate our dependence on the Western world.

"The Dr Wale Babalakin renegotiation committee was truncated with the introduction of the Education Bank, where students would be given loans they would be compelled to pay after graduation with no guarantee for employment and job security. ASUU said No.

“The Prof Muzali Jubril-led renegotiation committee was distracted with the introduction of IPPIS even when they concluded and submitted a draft agreement to Federal Government.

"Today, IPPIS has been revealed as a cesspool of fraud and corruption.

"The most recent renegotiation committee led by Emeritus Prof. Nimi Dimkpa Briggs was truncated with blackmail (for which the Committee released a paid advertorial to exonerate itself from the false allegations), No work no pay policy, approval of parallel Unions to break the ranks of ASUU and prorated salary payment.

“Yet they submitted their draft report and a 14-man committee was set up to review it.

"While the committee was to commence their review, the Minister of Labour and Productivity, Dr Chris Nwabueze Ngige took ASUU to Court (or Arbitration Panel as stipulated by extant laws of the land) and the committee has gone into oblivion.

“ASUU members’ service scheme comes with responsibilities that engage workers all the time.

"In the office with inadequate facilities and compliments of office equipment, lecturers attend statutorily and emergency meetings, grade scripts, attend to/advise students, upload results with purchased data and carry out administrative responsibilities. In the laboratory, research and innovation are executed with improvised facilities.

“In the lecture halls, lecturers interact with students in overpopulated halls without teaching aids to impact knowledge and discipline, mould the character of the students, guide them through seminar presentations, conduct assessments and examinations, and so on.

"At home, they read and correct students’ seminars and projects/dissertations/thesis, engage in a literature search to develop new curricula due to the lack of facilities in the libraries, update lesson notes or write books for publication, compile results of research, develop articles for publication in ranked and indexed journals and interact with the community for uptake of research and innovations.

“This entire luggage is at owner’s risk and is achieved with the self-improvised power source and personally funded access to internet and data”, he said.