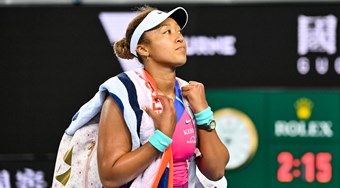 Defending champion Naomi Osaka said on Friday she "is not God" and cannot always win after the defending champion was knocked out of the Australian Open in the third round by unseeded Amanda Anisimova.

The Japanese four-time Grand Slam champion won the first set on Margaret Court Arena but the nerveless American saved two match points in the third to pull off a huge 4-6, 6-3, 7-6 (10/5) upset.

Osaka was making her return to Grand Slam tennis after a long break following a tearful third-round exit at the US Open in September, the culmination of a difficult year where she was plagued by doubt and said she suffered depression.

She said ahead of the Australian Open that her goal for 2022 was to have more fun and she attempted to remain upbeat even after her title defence came to a premature end.

"I fought for every point, I can't be sad about that," the former world No 1, who was seeded 13th, said.

"So I just have to take that into account and know that it would be nice to win the tournament, that's really special, and I can't think of myself to try to win the Grand Slam at the start of the year every time.

"I feel like I grew a lot in this match. The last match that I played in New York (US Open) I think I had a completely different attitude, so of course, I lost, but I'm happy with how it went."

Defeat to Anisimova deprived the 24-year-old of a shot at world No 1 Ashleigh Barty in the fourth round.

But the new Osaka was relaxed about the missed opportunity and said she was just happy for the 20-year-old American – while admitting she would be staying off social media to avoid getting caught up in negative headlines.

"It's always a tennis match, you know what I mean?" she said.

"I feel like the outside stuff comes after. But it's funny, the first thing that I'll probably do when I look at my phone is delete Instagram and Twitter, and then I probably won't re-download it for a couple of weeks.

"To me, it's exciting. Not the loss itself, but the person I lost to because it's showing the growth of tennis.

"I feel like now I'm in this position where if I lose to someone, it might make a headline, but I also think it kind of grows more superstars, and I feel that's good for the game."