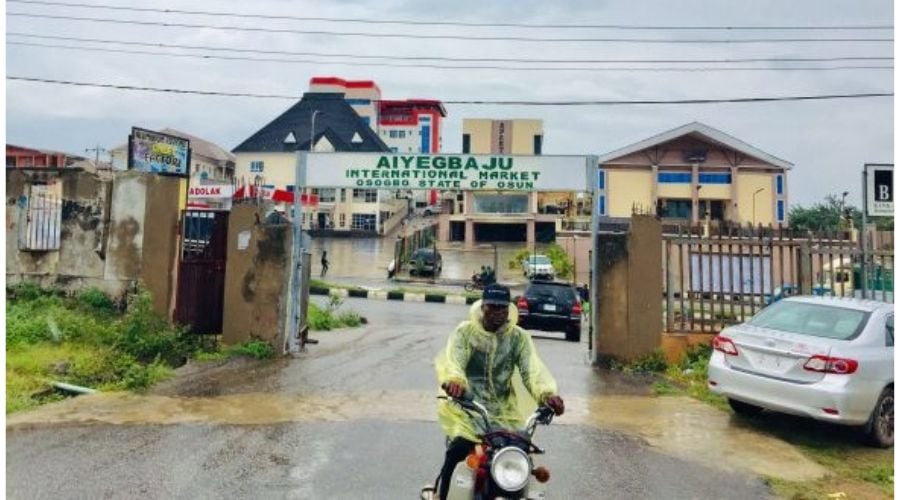 The Ayegbaku International Market was a dream come true but over the years, has this market fulfilled the reason for its establishment?

Sitting in his wooden kiosk, Ademola Kazeem shared his experience trading and eventually quitting the Ayegbaju International Market in Osogbo.

“The government changed the agreement and promises. That is why we left,  Ademola said as he munched a chunk of Akara in frustration.

"Many businesses got ruined; a woman here ran at loss in her frozen food business as most of her fish got spoilt due to lack of electricity,” he added.

Before the international version was constructed, the local Ayegbaju market was one of the most patronised.

However, things changed soon after the state government upgraded the market.

Many roadside traders who were supposed to be the prime beneficiaries of the new market turned their businesses elsewhere because of some issues they faced.

The Ayegbaju ‘ultra-modern international market’ was commissioned on Monday, July 7, 2014, by the then Osun State governor, Rauf Aregbesola.

According to several news reports, the project estimated at N2.3 billion was awarded to Edward Consult Limited, an estate developer, in a Private-Public Partnership (PPP).

They envisaged the market would provide a good business environment for market women and men, as it was designed with edifying infrastructures that include public toilets, health centres, police posts, car parks, good electricity connection, CCTV and more.

While it is reported that the shops were rented to the traders for as low as N1,000, this doesn’t seem to be the case as traders say it is far beyond that price and is, in fact, expensive. Many of them said the price, among other factors, has chased them away from the market.

Meanwhile, Segun Adeyemo, the Director of the market, could not state the actual price per shop when asked.

Instead, he explained that there are about 1,000 shops built into different categories, from the exclusive shops to the mini and open shops meant for butchers and pepper sellers.

It was observed that the shops occupied and opened are not up to 50 out of the 1,000.

The story reports that the Osun State government complained over traders’ refusal to utilise the market even though 95 per cent of the shops have been leased out and paid for. Nothing has changed since then.

In August, when Udeme spoke with some of the traders, they revealed that the shops are currently not occupied because they were rented or sold to civil servants and politicians who have locked them with no apparent intention to put them to use.

Alarape Aminat, a trader who sells clothing materials in the Ayegbaju market, expressed her displeasure with the situation.

She said the market is empty and deserted because those who rented or bought shops are not putting it to use.

“I have been here since the market was opened, and believe me, this market is very convenient.

"However, the lack of traders caused by those who bought shops and didn’t use them affected its growth”, Aminat explained.

At Akindeko market in Osogbo, Ademola Kazeem sells beef. Some years ago, when he heard about the new market, he rented one and relocated, but poor sales eventually forced him out.

Not happy with the situation, he told Udeme that the former administration disappointed them as most promised facilities were not built.

“We all went there and rented shops and spaces in the market immediately we heard it was open.

"But all the things that we were expecting weren’t there, including the power supply. Our businesses started destroying, so we came back here to the roadside,” Ademola said.

At Oroki market opposite Akindeko market, a trader, who prefers not to be mentioned for fear of backlash, expressed her disappointment with the market.

“Whatever one wants to do, one should put God first. I spent money on that market myself, but all wasted because what we were promised was different from what we met.”

The disappointed trader added that they are no more moving from their current market to Ayegbaju.

“This is our market here, and we can’t move from here to Ayegbaju,” she said.

One shopper in the Ayegbaju market, Oladeji Olawale, told AllNews Nigeria that he finds the new market more convenient for shopping than the roadside option.

“I love to always come here to buy my stuff because of the parking space and security.

"Indeed, the market is okay but not properly organised, and I found out that this market may not work because of the creation of sub-market and complexes elsewhere in the city, where most business owners are turning to instead of coming here,” he said.

Adeyemo, the Marketing Director of Ayegbaju market, explained that the situation was even worse before he took over the administration.

“I resumed as the marketing director of the market last year May. Before I came, it was something else, but when I resumed office, I had done little work to encourage people to enter the market. That is why it’s at this stage you met it.

“I did so many jingles and bonanzas to lure people in, which actually yielded with time,” he said.

Segun also added that the poor situation of the market was worsened by the location and the planning of the market.

"Another reason is the many rising markets and complexes in the city today.”

The developer could not be reached but sources privy to the PPP arrangement said Edward Consult Limited has sold all the shops and cashed out.

Segun confirmed that the shops and complexes were indeed sold out, and most of the buyers were career officers and other individuals who were not present in the country.

Jibola Falode, the Director of Commerce, who spoke on behalf of the Commissioner for Commerce and Industry in Osun State, said many attempts had been made to increase the utilisation of the market, but their efforts seem futile as many new complexes and sub-markets are rising daily in the state.

“The problem is that if some individuals had not paid for some shops, it would have been easier to advertise for people to subscribe, but it is difficult owing (to the fact) that there are owners of the shops.

“There was a time we went on air to tell people to come and use the shops for free for three months.”

Jibola added that the ministry is liaising with the Ministry of Justice to follow a legal route to open the shops that were abandoned by owners.

Segun and Jibola said the state government still generates revenue from the service charges and rents in the market.

“Though it is in the market’s account, the money will be transferred to the government very soon," Jibola Falode said.

Several attempts to reach the former governor via calls and emails were futile.

Five Political Reasons Oil Exploration In The North Is Worth Celebrating

Five Political Reasons Oil Exploration In The North Is Worth Celebrating