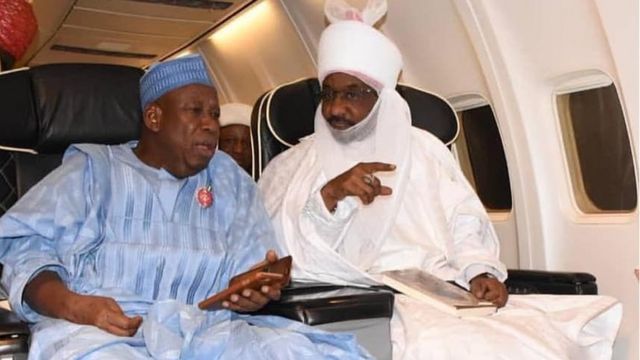 Kano State Government says it will appeal the two judgements against it and the All Progressive Congress faction of Governor, Abdullahi Ganduje.

Allnews.ng earlier reported that a Federal High Court in Abuja, on Tuesday, ordered Kano State Government to tender an apology to the 14th Emir of Kano, Muhammadu Sanusi II , in two national dailies and pay him 10 million naira as damages.

The court, in a judgment that was delivered by Justice Anwuli Chikere, held that Sanusi’s forceful banishment from the state after his dethronement, was illegal, unconstitutional and in gross violation of his fundamental human rights.

Similarly, an Abuja High Court on Tuesday nullified the congresses of the Governor Abdullahi Ganduje’s faction of the All Progressive Congress (APC).

In his ruling, Justice Hamza Mu’azu upheld the congresses conducted by the Senator Ibrahim Shekarau-led faction of the party.

The judge ruled that the congress which returned 17,908 members was valid.

However, reacting to the court ruling on Emir Muhammadu Sanusi II , the state Attorney General and Commissioner for Justice, Barrister Musa Lawan said the state will appeal the judgment as they reject the ruling in its entirety.

The Commissioner added that the constitution recognize tradition and custom and should be protected.

‘’We are studying the judgment and going to take the right decision, definitely we are going to appeal. But then Kano State Government would do everything possible to protect the custom and tradition of the people. Where a person that is part of the emirate decide to destroy the tradition and custom and do only things that he deemed fit will not be allowed,’’ said Musa Lawan.

‘’For over hundred years , it has been the tradition and custom in our clime that when an emir is deposed, he is banished to another community and there was nothing usual in the case of Malam Muhammadu Sanusi II, ‘’said Musa Lawan.

On the issue of the issue of nullification of the APC congress of the Ganduje led faction, the State Attorney General said the duly recognized leadership of APC conducted ward congresses in the state and that was the only one conducted in Kano.

‘’There was no any APC congresses conducted at ward level apart from the one conducted by the recognized leadership in the state and that was the only one. So it is surprising that some people went to court and even tendered a result of a congress that did not take place is surprising.’’

Musa Lawan added that despite the defence Counsels argument on the jurisdiction of the court in Abuja, the judge decided to rule on the matter in favour of the applicants.

In another swift reaction, Kano state commissioner for information, Malam Muhammad Garba in a statement on Tuesday said the ruling only affects ward congresses not state or local government executives of the party as the party structure in the state is still recognised by the national headquarters of the party.

He, however, confirmed that the party has filed for an appeal of the Federal High Court judgement and a stay of action on the matter.

Malam Garba appealed to party members to remain calm and carry on their responsibilties as dictated by the constitution of the party.