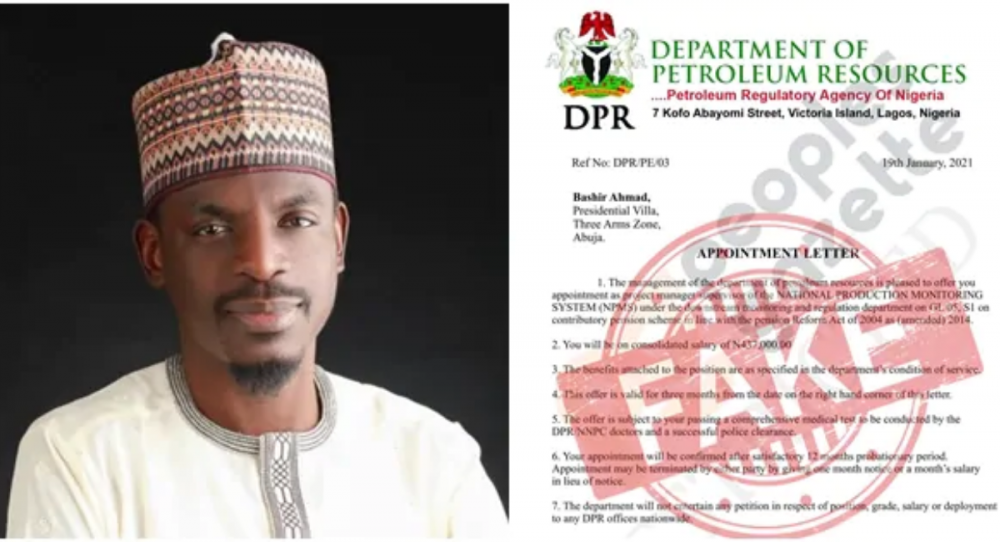 Clearing the purported falsehood being circulated on social media, the Department of Petroleum Resources (DPR) on Tuesday said an appointment letter circulating on social media allegedly issued to President Buhari’s media aide, Bashir Ahmad is “fake” and a “handiwork of mischief-makers.”

AllNews Nigeria recalls that an online digital platform, Peoples Gazzette, Monday posted a report that; Ahmad was appointed secretly “to supervise a powerful and lucrative division at the Department of Petroleum Resources (DPR) — a role that supersedes his work experience and area of expertise as a graduate of Mass Communication from Bayero University.”

In a statement signed by DPR’s head of public affairs, Paul Osu explained; “We hereby advise members of the public to disregard the purported letter in its entirety as it is not from DPR. We wish to reiterate that employment into the Department is carried out in accordance with extant rules guiding such exercises in the Nigerian Public Service in line with due process.”

The Department of Petroleum Resources (DPR) attention has been drawn to a fake letter of appointment circulating on social media purportedly issued to one Bashir Ahmad. pic.twitter.com/VzHpJfflYY

The report said despite Ahmad retaining his appointment as the presidential Personal Assistance, “he recently hustled his way in as the head of the newly-established National Production Monitoring System (NPMS) of DPR – Nigeria’s preeminent oil and gas sector regulator, the Gazette learnt from four officials at the presidency and DPR with sufficient details of the appointment.”

Quoting a source within the State House, Peoples Gazzette reported that “Bashir got the appointment early January, but his documentation took place last week…It (the appointment) was delayed as one of his close allies, Jamilu Ibrahim Shinkafi died in a road crash along Bauchi-Nasarawa Road, precisely in Akwanga in Nasarawa.”

Ahmad has also denied the report. He said the story is “100% not true” and was a concocted claim. He also noted that he doesn’t even know where the DPR office is. He said the only thing he knows about the organization is that it is in Lagos.

After Ahmad’s denial of the said juicy employment, Peoples Gazette backed their claim by publishing a letter it claimed was issued to the presidential aide. Bashir also claimed the letter was doctored by elements who loves to spread falsehood.