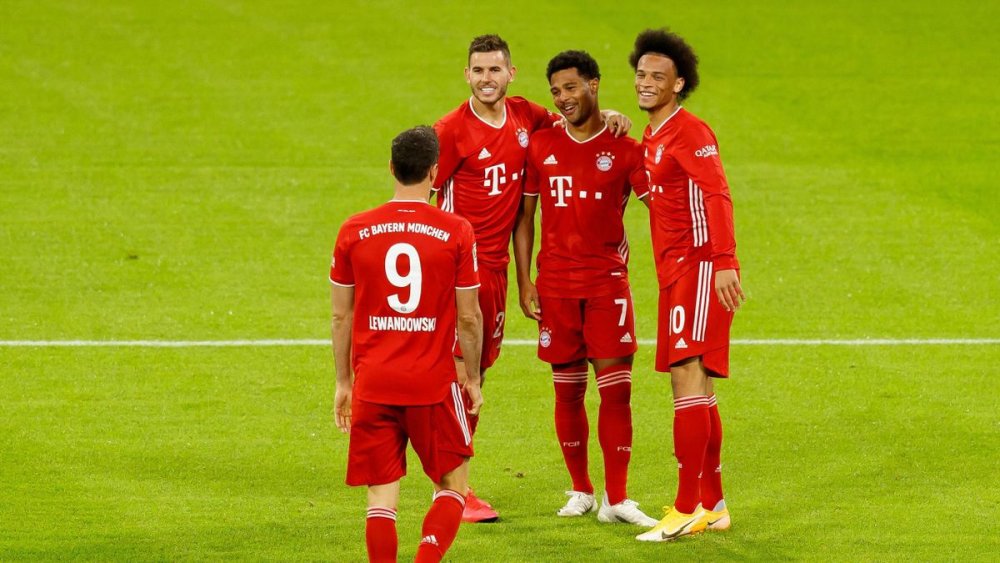 Bayern Munich kick-off the new campaign in style as they defeated Schalke 04 8-0 with Serge Gnabry's hattrick and Leroy Sane getting a debut goal and two debut assists against his former club on matchday 1 of the German Bundesliga.

The European and Germany Champions have made a statement of more or the same with the 8-0 hammering of the last season 12th place Schalke 04.

The game started with Gnabry getting very early on the scoresheet with an assist from Kimmich with just 4 mins on the clock. He scored with a lovely curler just at the edge of the 18-yard box to beat Farhmann.

Just before 20 mins, Goretzka extends the lead with an assist from Thomas Muller, he placed a low ball into the back of the net.

For over 10 minutes, it seems the German giants are cooling off and Schalke could have a chance to respond but things changed quickly when Robert Lewandowski was brought down in the box by Kabak to earn Bayern a penalty kick.

The Polish striker stands over it drops his arm, shoot to send the keeper the wrong way. The scoreline became 3-0.

The first half ended 3-0 unknown to the Schalke, there was still more to come.

Gnabry gets on the scoresheet again after the break with a debut assist from former Manchester City winger, Leroy Sane.

He paced down the right to beat his marker, his goalkeeper rushed out to deflect the ball off Sane's feet but Gm=nabry was running behind to tuck it into the net.

Goretzka was substituted for Tolisso with just 6 mins into the second half.

Gnabry completed his hattrick with just before the hour mark, Sane was again instrumental to the goal but also unselfish.

Muller dinks a ball over the Schalke defense to find Sane, he paced down into the box to face the goalkeeper, completed a 360 turn, and drops the ball for Gnabry to score. He did not jubilate against his former club. The scoreline changed to 5-0.

Bayern continued their dominance on the demoralized Schalke 04, after a lovely pass, Lewandowski was free with the goalkeeper but could not get a shot away, he gave a lovely cross to Muller, who finished off the goalkeeper to make 6-0.

Leroy Sane got on the board after 2 assists to seal a debut goal, as he used his pace to get on a long-range pass from inside the Bayern's half, he then round-off Farhmann in style for a debut goal against his former team. It is 7-0 and he did not still celebrate.

Musiala was brought in for Gnabry and the 17-year-old also had his own cut of the free cake. He cuts in from the left, ran at the already demoralized Schalke defense, and tucked it away in style.

It was a huge win for Bayern Munich and a cause for concern for Schalke 04 as the season opens in the German Bundesliga.

Fußballclub Gelsenkirchen-Schalke 04 e. V., commonly known as FC Schalke 04 or Schalke, Schalke 04, or abbreviated as S04  is a pro...