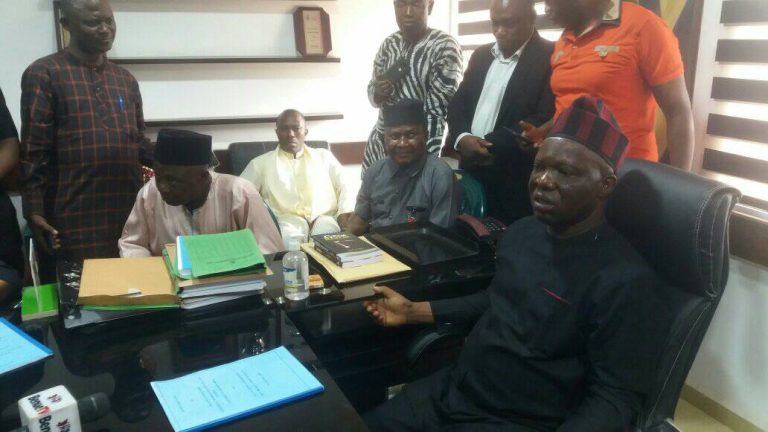 Micheal Inalegwu and sympathysers at his office in Benue state

The Commissioner of Information, Culture, and Tourism, Mike Inalegwu on Monday, lost his elder brother to gruesome murder perpetrated by suspected armed herdsmen.

Sixty-Five-year-old Christopher Inalegwu was attacked at his farm, when trying to raise alarm over the presence of herdsmen in Aku Community, in Okokolo Council ward of Agatu Local Government Area of the state.

The Commissioner, who received the news of the death while on an official assignment, expressed grief over the unfortunate event, lamenting the activities of armed herdsmen in the state.

According to him, "When he saw them coming into his farm, he started shouting and raised the alarm that armed Fulani men were in the village. At that point, they opened fire on him and retreated. When our people ran to the scene after hearing the gunshots, they saw my brother in his pool of blood.

"This is painful, he was defenseless, he was the only brother I had left and these herdsmen came and took his life just like that without any provocation.

"It is unfortunate that this is happening to us in this state. I plead with our people to report the movement of these people to security agencies for necessary action.

"As I speak with you there is nobody in the villages in neighboring Agagbe axis of Gwer West Local Government Area. It is only in my village that you can find people at home because of the military and security personnel that are stationed there.

"From what I gathered, the attackers came from Nasarawa state, and they passed through a massive land in Agagbe and Ambya in Gwer West and nobody knows when they come into our communities.

"But yesterday our people discovered the route and we directed that the axis should be blocked. I had also discussed with the Special Adviser on Local Government and Chieftaincy Affairs on how we will take precautionary measures to forestall any attack but before we took the action this happened," he said.