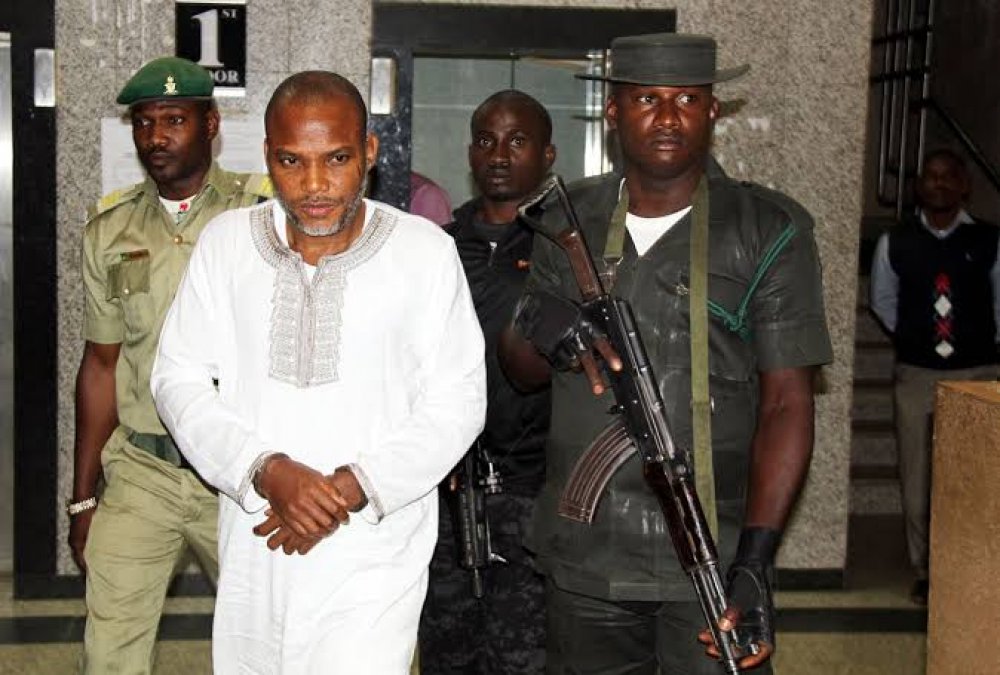 Biafra Political Activist, Nnamdi Kanu has declared his readiness to stand trial at the International Criminal Court (ICC) in The Hague, if 'defending Easterners against external aggressors' would warrant his appearance at the court.

Kanu, the diaspora-based leader of the outlawed Indigenous People of Biafra (IPOB), who made the declaration in his routine live broadcast via digital platforms on Sunday night, regretted that harassments and extrajudicial killings by Nigerian security agencies have continued unabated across the South-East and South-South regions of the country. The broadcast was monitored by this reporter.

The controversial IPOB leader alleged that the world had maintained criminal silence over the plight of Biafrans despite complaints and petitions by IPOB, as well as indicting reports against the Nigerian authorities and security agencies by some reputable global agencies including the United Nations (UN) reportuer on human rights, and Amnesty International.

READ ALSO: ESN: 'We Had No Choice But To Defend Our Ancestral Land' - IPOB

According to Kanu, besides state-sponsored persecutions and brazen infuriating marginalisation and exclusion against Biafrans, killer herdsmen and terrorists have continued to raid communities in the Eastern region unchallenged by the security agencies.

"Herdsmen will attack us, rape our women, destroy our farms and kill our farmers nobody will arrest them but when we try to defend ourselves, government will come after us rolling out the tanks and using their helicopter gun boats”, he expressed his fury.

Furthermore, Kanu explained that the incessant unprovoked attacks by herdsmen and the 'docility' of the Nigerian authorities gave rise to the formation of the Eastern Security Network (ESN), to protect the hapless locals against terror.

However, the 53-year-old regretted that instead of going after the perpetrators of the heinous crimes against innocent citizens, the Nigerian State rather chose to declare war against the ESN as demonstrated in Thursday’s air strike in Orlu forests, Imo State.

The IPOB leader who said that the Orlu military raid marked the beginning of the second Nigeria/Biafra war vowed to mobilise the people in defense of their ancestral land “no matter the consequences”.

"If defending our ancestral land against conquest by Fulani Janjaweed invaders will take me to the Hague I am ready to go to the Hague”, Kanu stated.

Continuing he said: ” The world has the indicting report by the UN Reportuer against Nigeria but they have not done anything. Do we have to wait until we are all killed before we defend ourselves?”

Kanu expressed shock that the world had helplessly watched the Nigerian State use brute force against mere peaceful agitators while on the other hand dialoguing with, and facilitating amnesty and payment of ransom to bandits and terrorists who have not shown any remorse or sign of ceasation to their killing spree.

According to him world leaders ought to have demanded probe of Nigerian Leaders including some Northern Governors and Islamic clerics over their romance with bandits.

He said he would declare 40 days prayer and fasting by next week for Igbos all over the world to seek God’s presence, and for more spiritual fortification for the task ahead.

Kanu who restated Biafra’s Jewish root said Israel can never be crushed by their enemy because of  Abraham’s covenant with God which he claimed follows Biafra.

He expressed optimism that Biafra would soon be restored despite stiff opposition by the Nigerian State.

Kanu's IPOB is a Biafran separatist organization in Nigeria. Its main aim is to restore an independent state of Biafra in the South East of Nigeria through an independence referendum.