On Friday, November 6, Citation, the seventh movie of filmmaker par excellence, Kunle Afolayan, will be released on video streaming platform, Netflix, to a global audience.

The coming of age movie, written by Tunde Babalola, is a university drama centred on a female postgraduate student who has to find a way of dealing with the incidence of sexual harassment from a popular male lecturer.

It was shot in Nigeria, Senegal and Cape Verde and features tested thespians like Haitian-born Hollywood actor, Jimmy Jean Louis, Sadiq Daba and Gabriel Afolayan with a cameo by Dr Mrs. Ibukun Awosika, the chairman of First Bank of Nigeria.

Last Saturday, Citation was premiered to a select audience at the Terra Kulture, Victoria Island. 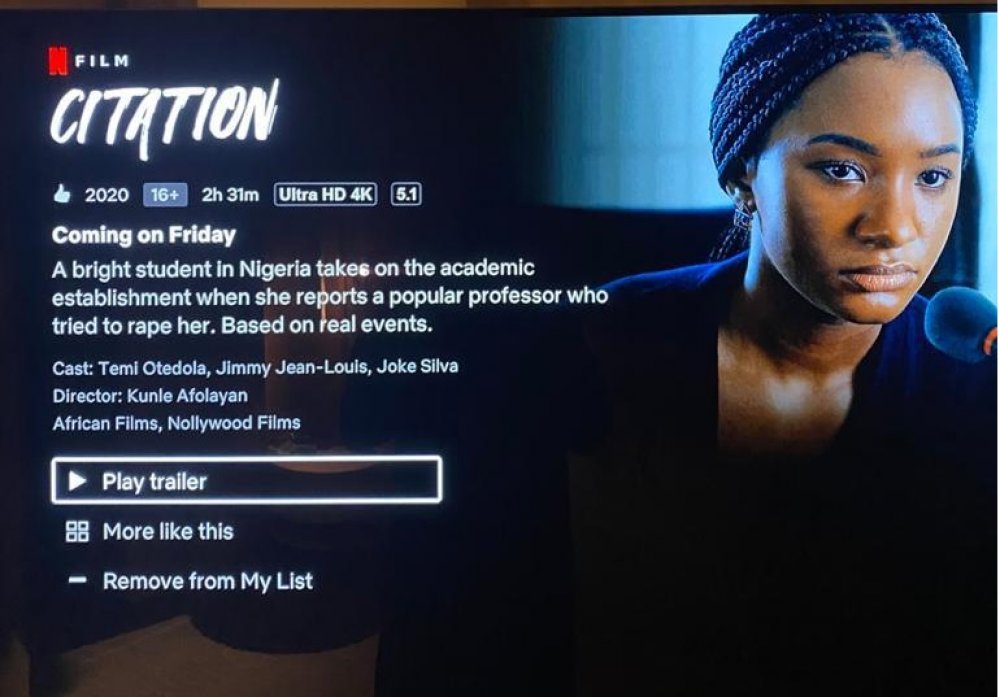 Starting off with the red-carpet moment, canapés, cocktails and conversations, the screening began with the opening speech from Afolayan who welcomed everyone and appreciated the effort of the cast, crew and the partners.

As the movie screened to the eclectic audience, there was no mistaking that Afolayan’s reputation for turning a newbie to a maven would be further cemented with Citation as billionaire heiress, Temi, the winsome fashion and arts-loving daughter of Femi Otedola, stars and sparkles.

Temi, the last child of the billionaire businessman, is a fashion and travel blogger and owns JTO Fashion, a multimedia platform from which she expresses her adventures through the arenas of fashion, beauty, art, and travel. Like her two older sisters, Tolani and DJ Cuppy, who have blooming careers in entertainment, Temi also has the backing of her dad. DJ Cuppy has toured the world and performed at big concerts as a Dee Jay and budding musician; while Tolani, the dark-hued singer-songwriter took the Nigerian music industry by storm in 2019 with her hit single, Ba Mi Lo, featuring Reekado Banks.

She got a standing ovation for her compelling acting, just as Afolayan was also commended for a job well done.

According to him, ‘The Citation,’ apart from its thematic premise, will attempt to market Cape Verde to Nigerians and the rest of the world while also establishing film and cultural affinity between the two countries.

In a statement made available to the media months back, Cape Verde’s Culture and Creative Industries Minister, Abrãao Vicente, who led the government team that included the Director-General of Arts and Creative Industries, Adilson Lima Gomes and the Coordinator of Cultural Goods and Music, Luhena Correia, in negotiating the deal, was quoted as saying that she believes that the collaboration will enhance a good relationship between Cape Verde and Nollywood.