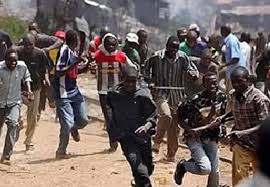 A bishop was yesterday burnt alive while his son was beheaded after a communal war between two Cross River communities took a turn for the worst.

The communal war happened between the people of Abanwan and Urugbam communities in the Erei clan, Biase Local Government Area of Cross River State.

It was gathered that the Bishop whose name was yet to be ascertained was ambushed alongside his son while on a motorbike on their way from Abanwan community to nearby Afikpo in Ebonyi State.

Sources said that about six houses and their occupants were set ablaze as the attackers mobilized and invaded the Albanian community.

The Erei community have over the years, been at loggerheads over a piece of land that was established by the defunct Eastern Region before the Nigerian Civil War as an Oil Palm Plantation Settlement.

The settlement was handed over to the Cross River State Government shortly after the Nigerian civil war of 1967-1970 given that the location was in the state. However, the Erei community where the oil palm plantation was located has 10 villages.

Meanwhile, troops from the 13 Brigades of the Nigerian Army have moved into Abanwan and Urugbam communities to restore order.

The information officer at 13 Brigade Nigerian Army Calabar, Captain Aluko, confirmed that they have moved men and materials into the communities yesterday.