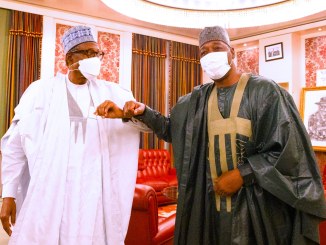 President Buhari, Governor Zulum on Tbursday at the Presiential Villa

The Governor who spoke shortly after a closed-door meeting with the president, on Thursday in Abuja, said the development has led them to enjoy relative peace as security agencies continue to take measures aimed at checking the activities of insurgents in the region.

He expressed optimism that the insurgency in the Northeast would soon be a thing of the past.

“I briefed Mr. President on the status of Borno State as regards security as well as Internally Displaced Persons (IDPs), and so far so good.

“This is a welcome development and under a closed-door session, we discussed a lot of issues and how the government of Borno State, as well as the federal government, will manage the ongoing surrender by the insurgents.

The governor disclosed that the objective of engaging the insurgents through dialogue and mediation had started yielding fruitful results.

He also lauded the Federal Government for the heavy military deployment to Southern Borno, and expressed the hope that Northern Borno would also witness similar deployment to restore peace and law in the state.

“So far, so good, the objective has started yielding positive results. Apart from this also, in Borno State, for example, as I told you last time, we had problems on the shores of Lake Chad as well as in Southern Borno.

“I’m pleased to inform you that there was a very heavy military deployment into the southern Borno.

“And I hope such a deployment will also take place in northern Borno, with a view to clearing the ISWAP insurgents in Lake Chad.

“So, this has also yielded positive results.

“And then on the relocation of the two local Government Areas that last time, I said were not occupied by human beings, we are also doing very well with the military to see how we can return back the population,’’ he added.

The governor dismissed the assertion that the repentant insurgents were assured of any promissory notes before they surrendered.

He, however, assured that those who surrendered willingly would be treated differently from those insurgents captured by the Nigerian troops on the battlefields.

“We don’t make, or have any promissory notes, to defectors, honestly speaking. But you have to also understand one very important thing; there is a difference between those that have been captured and those that have surrendered.

“People should understand these two situations. Go back and Google and see the international conventions, rules, and regulations.

“There is a difference between those that have been captured and those that willingly surrendered. And I’m calling on all of you to give a very positive insight into this development.

“Because there’s nowhere in the whole world such kind of war ended with kinetic measures. There must be certain political solutions.

“The way we are going, with the support of the federal government with good management, Boko Haram will be over very soon," he said.