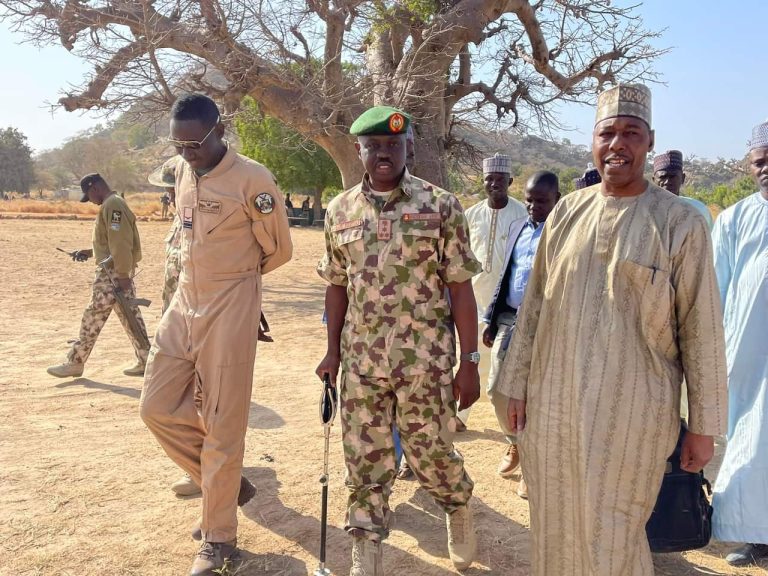 The Governor of Borno State, Babagana Zulum, has visited the families of victims of the recent Boko Haram abduction and attacks in the Chibok Local Government Area of the state.

The News Agency of Nigeria (NAN) reports that the insurgents within three weeks attacked three villages of Kautikari, Korohuma and Pemi, within the fringes of the Sambisa forest.

Zulum during the visit also met with community leaders where he assured them of enhanced security.

”We are here in Chibok to commiserate with you, immediate families of our sisters and brothers abducted as well as four of our brothers killed by the Boko Haram terrorists in these unfortunate incidents.

“We share your pains and we pray this act will not happen again,” Zulum said.

He reiterated the State Government’s commitment to supporting security agencies to contain the situation.

Community leaders said 22 women and two men were abducted by the insurgents.

The insurgents also killed four, razed down 73 houses and 33 shops.

NAN reports that on January 15, the ISWAP attempted to infiltrate Biu town through Maina Hari near Wakabiu Biu, 7km from Biu, but the Nigerian Army attacked and repelled them recovering several rounds of ammunition and other equipment.

The Nigerian Army in a statement confirmed the attack.

It stated, “The criminal elements met their Waterloo when the gallant troops of 231 Battalion and 331 Artillery Regiment swiftly routed them in a failed incursion at Maina Hari village in Biu on January 15, 2022.”

On January 13, there was an invasion of the Police Mobile Training College,  Limankara in Gwoza Local Government Area.

The Police in the state said no police officer was missing and no equipment was destroyed.