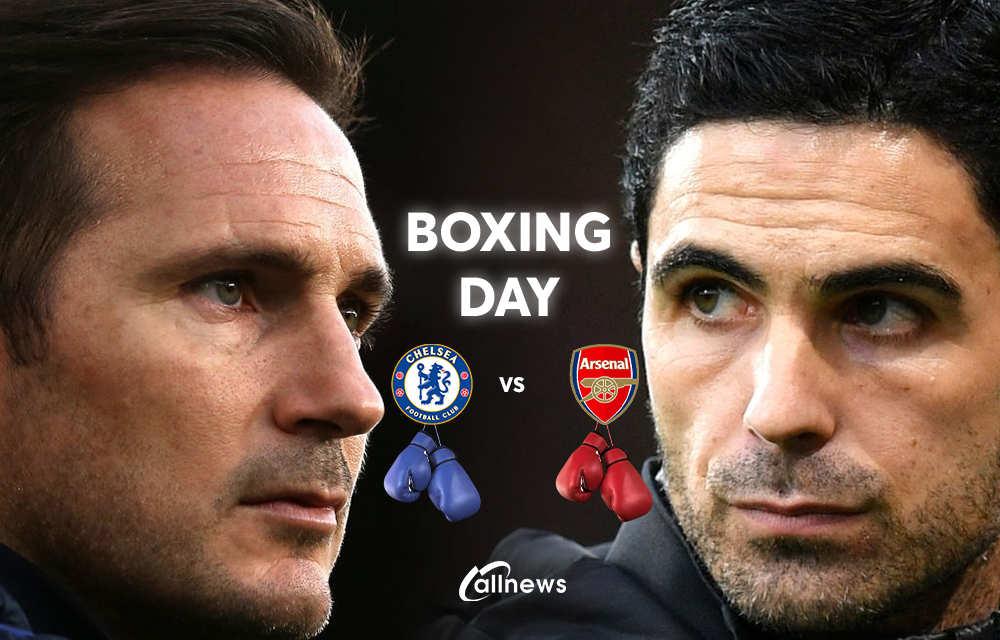 The busiest day in the English Premier League is December 26th, a day after Christmas, the boxing day all teams in the English top-flight, battle it out for the match-day 15. It features the most fierce-some rivals in the Premier League history but this season would witness a London Derby; Chelsea vs Arsenal.

Chelsea vs Arsenal: Both teams would be meeting again after the FA Cup final defeat Chelsea suffered at the Wembley for Arsenal to swoop the oldest cup in the England League.

READ ALSO: Willian To Arsenal: The 4th Player To Move Directly From Chelsea To Arsenal

No team has won more Premier League London derby matches than Chelsea (129), one more than Arsenal. The total London Derby involves other matches against other London teams such as Tottenham, West Ham United, and Fulham.

Arsenal has been refreshed squad wise ahead of the EPL 2020-21 season bringing in a new name such as Williams, keeping their skipper, Pierre Emerick Aubameyang, extending the stay of other youngsters such as Bakayoko, Pablo Mari, Cedric Soares, Dani Ceballos, and Maitland Niles.

Arteta has also added some depth to their plays especially when playing one of the top 6 teams. A huge statement was made by Arsenal FA Cup and Community Shield win defeating Manchester City, Chelsea, and Liverpool on their way to claiming the two silverware.

The Gunners also have added some width to their game playing more of attacking fullbacks, drawing more players up the field, putting more pressure on their opponent but still lack clinically in front of the goal. They also need more incisive plays from wingers - with Willian and Nicholas Pepe in the squad - Arsenal can also cut into opposition defense from the wing and score.

It remains delicately poised on how the season would start but with the kind of mentality shown by the EMirate camp during the latest outings, they would be a force to reckon with going forward.

Chelsea has been the biggest spender across Europe's top 5 Leagues drawing in the most coveted players in Europe to the Stamford bridge. They even had some free signings which also solves their immediate problem, especially in their final third.

Frank Lampard also might face some squad selection problem with more than 2 players fit and capable of playing in a position but that also has its upside providing healthy competition for the team.

It is one thing to sign players but it is a whole different thing to gel them into a team that wins -  especially with 4 of these major signings coming from other 'lesser leagues' compared to the English Premier League.

In the center-forward position, Tammy Abraham, Olivier Giroud, and Timo Werner compete for a spot, Kai Havertz, Kovacic, Kante, Mason Mount, Gilmour, Jorginho and Ross Barkley compete for a position in the middle of the pack provided they get rid of Bakayoko, Drinkwater, Loftus Cheek, Marco Van Ginkel. They also still have some other youngsters on the team.

All that said, If Frank Lampard can really build these young players into a team, they would be one of the fiercest teams in European football since Barcelona's golden age.

The boxing day also opens up a chance for Frank Lampard to revenge the FA Cup defeat.

More than a London Derby

The match is also more than just another London derby match as both teams are represented by their Ex-players now in a coaching role. Frank Lampard played for Chelsea, Mikel Arteta also graced the 02 jersey at the Emirate stadium.

They also represented the same team in the English Premier League; before Mikel Arteta took up the reins at Arsenal, he was assistant to Pep Guardiola side for over a period of two seasons. It is also true that when Lampard left Chelsea in 2014, he signed for Manchester City where he scored over 6 goals in 32 appearances even one against his old team, Chelsea.

Both teams also boast players who have played for them; Willian, Giroud, David Luiz. Maybe the 'old player curse' would also come into play and they would each get on the score sheet.