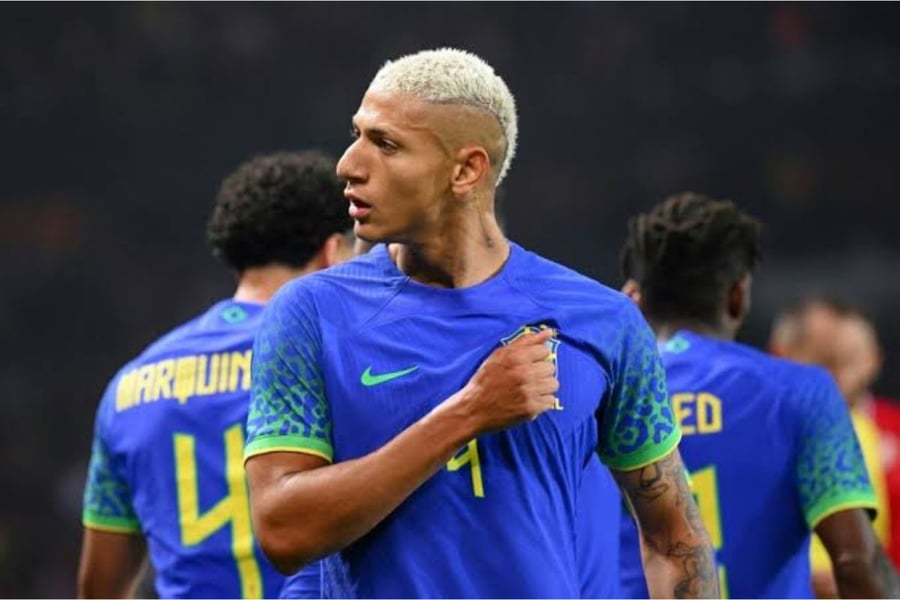 Tottenham forward Richarlison was the target of a banana thrown from the crowd as Brazil thrashed Tunisia 5-1 in a friendly in Paris on Tuesday, while Neymar edged closer to Pele's all-time scoring record for the five-time world champions.

The game at the Parc des Princes was also briefly paused in the first half as the crowd were twice implored not to point laser pens at Brazil players.

"Unfortunately... a banana was thrown on the pitch towards Richarlison, scorer of the second Brazilian goal," the Brazilian football confederation (CBF) said on Twitter.

"The CBF reinforces its position to combat racism and repudiates any prejudiced act."

The Selecao produced a dominant first-half display in their final outing before travelling to Qatar for the World Cup, with Raphinha netting twice and Neymar moving to within two of Pele's record.

Richarlison also found the net, while Pedro scored as a second-half substitute before responding to more boos and missiles from the crowd by bowing in front of them in celebration.

Tite's Brazil will head into their World Cup Group G opener against Serbia on 24 November on a 15-match unbeaten run, dating back to their Copa America final loss to Argentina last year.

The scene for a bad-tempered match was set when the vast numbers of Tunisia fans jeered the Brazilian national anthem before kick-off.

Brazil created the first clear-cut chance of the game as Neymar slipped a pass through for Lucas Paqueta, but he could only fire a shot into the side-netting.

The South Americans did take the lead in the 12th minute, though, as Casemiro clipped the ball over the top and Barcelona winger Raphinha directed a wonderful looping header over Tunisia goalkeeper Aymen Dahmen and into the net.

Incredibly, Brazil were back ahead just seconds after that setback, as Raphinha sent Richarlison in behind to drill a strike through the legs of Dahmen to score his third goal in two games after a double against Ghana.

The Tottenham forward celebrated in front of the Tunisian supporters, who responded by throwing a banana and plastic cups in his direction.

Fred kicked the banana off the pitch, before extra security guards took up residence on the side of the field.