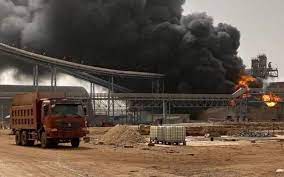 It was reported just recently that there was a fire incident that engulfed the diesel storage tank farm of Bua Cement Plc in Sokoto state.

According to some unnamed sources, the fire, which was extinguished on Sunday, March 20, 2022, claimed the lives of more than five people.

Notwithstanding, the company issued a public statement dismissing such an unverified report and detailing exactly what occurred on that fateful day.

"BUA Cement Plc hereby gives the Nigerian Exchange and the investing public notice of an isolated fire incident which occurred at a diesel storage tank farm located in the vicinity of one of our factories in Nigeria, on March 18, 2022," said Abubakar Magaji, company secretary, in an explanatory note sent to the management of the Nigerian stock exchange (NGX).

“The incident occurred whilst routine maintenance work was ongoing on one of the storage tanks by a third-party contractor.

“Immediately the incident occurred, emergency services were alerted and our team swiftly responded to prevent the extension of the damage to our main plant and equipment.”

The company eased its stakeholders' fears by assuring them that the collaborative efforts of all the fire services involved helped controlled the damages and limited the casualties regrettably to only three lives lost.

“We are however able to confirm the regrettable loss of 3 members of the third-party contractor’s staff.

"While we are working assiduously to investigate the cause of the fire outbreak at the depot, which had in place adequate safety and control mechanisms, members of the Federal Fire Service, State Fire Service, and our fire department were able to bring the fire under control on the 20th of March, 2022,” Abubakar said.

At present, the operations at the plant and production have resumed full service following its temporary shut down over the weekend.