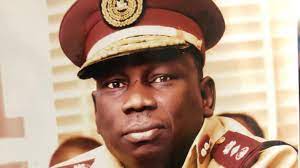 Biu takes over from Boboye Oyeyemi who retired from the national assignment on Sunday, July 24.

The news of his appointment came through Oyeyemi who handed over to him on Monday in Abuja.

As reported by the News Agency of Nigeria (NAN), the appointment of Biu takes effect from July 24, 2022, as contained in a statement by the Corps Public Education Officer (CPEO), Assistant Corps Marshal (ACM) Bisi Kazeem.

Oyeyemi further wished him well as he (Biu) assumes office.

The Board Chairman of the FRSC, Malam Bukhari Bello felicitated Biu over his appointment while calling on him to live up to expectations.

He further noted that Oyeyemi had laid a foundation worth celebrating for the FRSC while urging Biu to maintain the move.

On his part, the new FRSC boss, Biu expressed his appreciation to the Presidency as well as the management of the corps for finding him worthy of the appointment.

He further assured that he won't let the president down.

Biu was the Deputy Corps Marshal (DCM), Finance and Accounts at the FRSC headquarters before his appointment.

His career at the FRSC started in 1988 while he served in the corps in different capacities.

He was the Assistant Corps Marshal (ACM), Finance and Accounts in 2014 before his promotion to DCM in 2016.