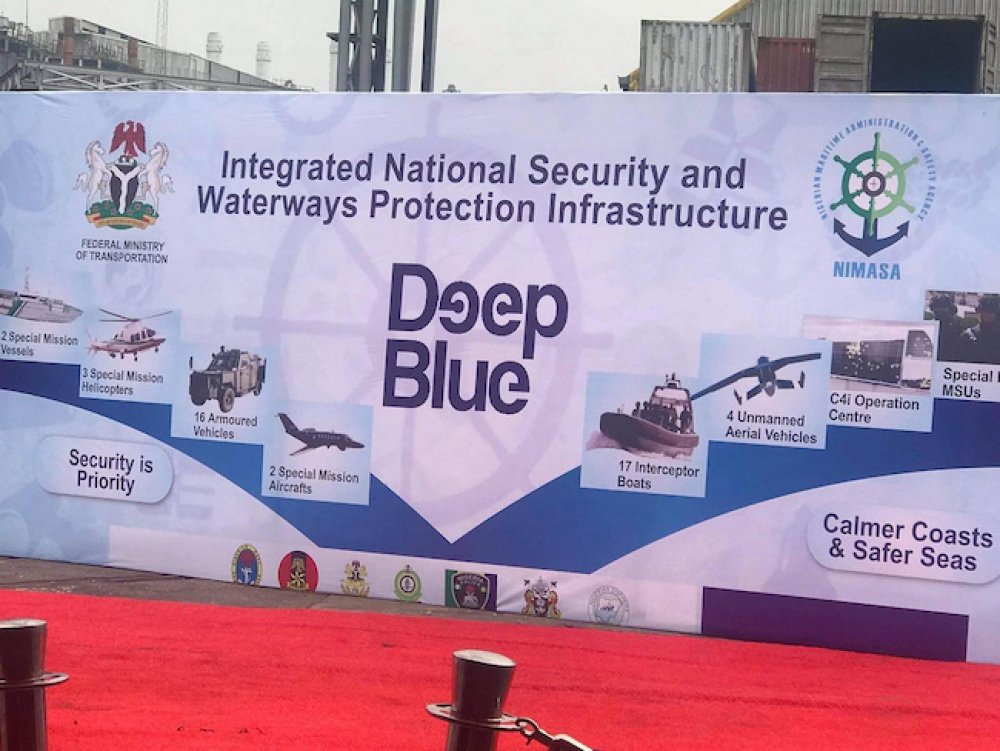 President Muhammadu Buhari says the Integrated National Security and Waterways Protection Infrastructure Project, popularly known as the Deep Blue project, was the benchmark for maritime security in the West and Central African region.

Buhari said this during the inauguration of the project on Thursday in Lagos.

He added that the project would facilitate a conducive environment for the maritime sector to thrive and contribute to the diversification of the Nigerian economy.

According to him, the Deep Blue project is a critical step for the realization of the maritime security in the region and underscores Nigeria’s commitment to providing the necessary framework, resources and cooperation with other nations and maritime users.

“The Integrated National Security and Waterways Protection Infrastructure Project, popularly known as the Deep Blue project is being initiated to foster security architecture and ensure greater enforcement action within the Nigerian waters and beyond.

“This assemblage of security assets is coming at a critical time when global discretion is centered at piracy activities and the new dimensions it has taken in the Gulf of Guinea.

“Water is accounted to over 80 per cent of transportation environment of the global economy, and so concerted efforts are needed to address the intended security challenges.

“Therefore, the flag off of the Deep Blue project marks an important milestone in this regard and our collective efforts to tackle the security challenges in the form of piracy and militants crimes in Nigeria and the Gulf of Guinea,” he said.

He pointed out that this would serve as a bench mark for member states in the Gulf of Guinea and other relevant stakeholders to further develop innovative strategies and align efforts with the subsistent framework to improve security in the region.

He commended the initiative and assured of the commitment of his government to the sustainability of the project.

“I am confident that the project which provides a robust security architecture will enhance maritime domain awareness capability and improve law enforcement action particularly in the prosecution of suspects and suppression of piracy and other maritime Offences act which I signed into law in June 2019,” he said.

Also, the Minister of Transportation, Rotimi Ameachi, pointed out that the financial and maintenance sustainability of the project would be developed by a committee saddled with that responsibility.

Amaechi expressed delight that the assets of the project had already been deployed to guarantee safety at Lagos Secure Anchorage Area (SAA).

He commended the Ministry of Defence and the Armed Forces Service Chiefs for their contributions throughout the preliminary stages of the project and encouraged them to maintain the support.

The Minister of Defence, Major General (rtd) Bashir Magashi, stated that with the Deep Blue Project, safety was guaranteed in the maritime sector and this would attract Foreign Direct Investments (FDIs) in maritime.

He described the C4i intelligence centre as the heart of the project, adding that with the operation of C4i and the entire project, piracy in the nation’s exclusive economic zone (EEZ) and the entire maritime space would be addressed.

Magashi stressed the need to make judicious use of the assets of the Deep Blue project and advised that proper maintenance be provided to ensure the benefits of the project were fully optimised.

He said with the deployment of the assets of the Deep Blue Project, the country had entered another level of national security designed for total spectrum maritime security and better domain awareness, using some of the latest technology.

“This effort to secure our waters will give Nigerians more leverage to harness the enormous resources of our maritime environment and aid the drive toward economic diversification,” he said.

According to him, the main objective of the Deep Blue Project is to secure Nigerian waters up to the Gulf of Guinea, and that the project has three platforms to tackle maritime security on land, sea and air.

The land assets include the Command, Control, Communication, Computer, and Intelligence Centre (C4i) for intelligence gathering and data collection.

“The Deep Blue Project is the first integrated maritime security strategy in West and Central Africa with the aim of tackling the incidences of piracy, sea robbery and other crimes at sea,” he said.

Jamoh said the Suppression of Piracy and Other Maritime Offences Act passed by the ninth National Assembly would now provide legal backing for prosecution and punishment of offenders which used to be a challenge.

The Deep Blue project has a central command and control centre based in Lagos.