Buhari In Lagos: President Speaks On Advantage Of Rail Network To Nigeria’s Ports 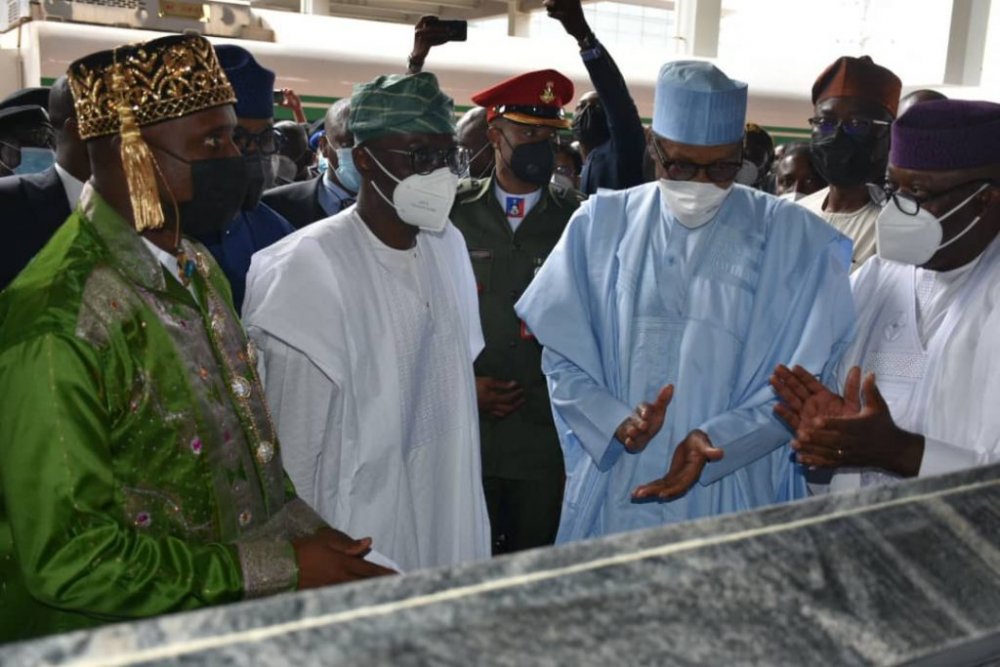 Buhari made the assertion at the flag off of the Commercial Operation of the Lagos – Ibadan Rail Line project held on Thursday at the Mobolaji Johnson Railway Station, Ebute Metta, Lagos.

He said that the inauguration of the standard gauge railway would be beneficial to the economy through employment from new business opportunities and wealth creation.

Buhari said that the Federal Ministry of Transportation and Ministry of Finance had been directed to vigorously seek financial agreements with appropriate co-financiers to partner with the Federal Government for the development of the Ibadan – Kano railway.

He said that the rail would connect the Tin Can Island port as well as the West – East Coastal rail line from Lagos to Calabar linking Onitsha, Benin, Warri, Yenagoa, Port Harcourt, Aba and Uyo.

“This is already yielding the desired result as construction activities on the railway segment, Kaduna – Kano has commenced with back-end engineering activities.

“Distinguished guests, from the beginning of this administration, railway infrastructure development has been given the priority it deserves and various milestones have been reached, right from when the Abuja – Kaduna railway was flagged-off for commercial operation in 2016.

“This Lagos – Ibadan railway project is being commissioned today for full commercial operation.

“I am pleased to address you again today and preside over the flag off ceremony for Commercial Operations of Lagos – Ibadan railway project at the Mobolaji Johnson Railway Station, Ebute Metta, Lagos, ” Buhari said. 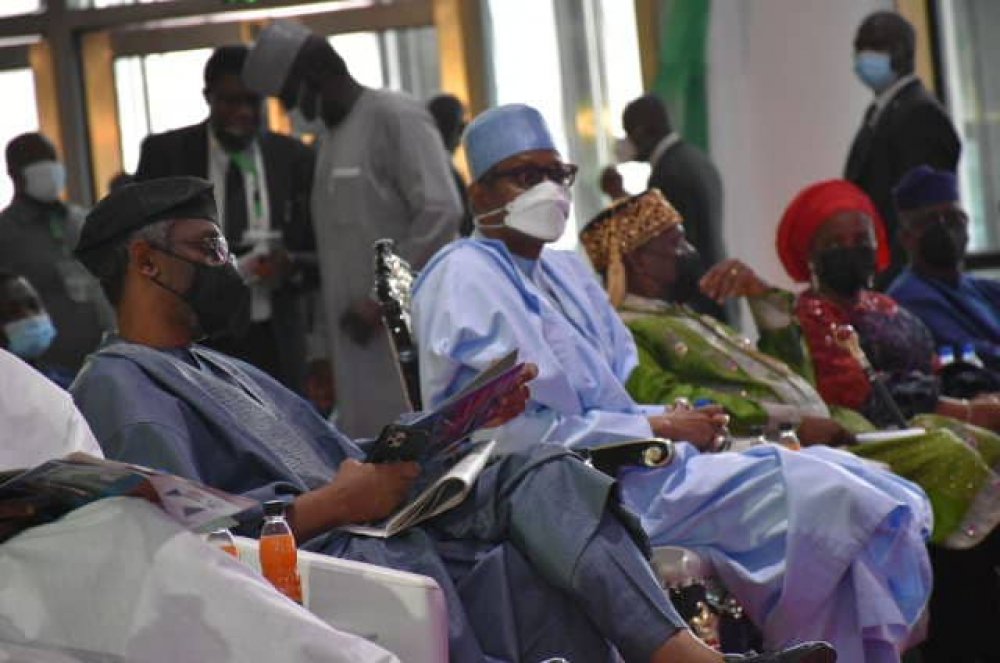 Speaker Femi Gbajabiamila, President Buhari, Rotimi Amaechi during the Flag off of Lagos – Ibadan railway in Lagos on Thursday.

According to the Nigerian leader, the vital line had established an end-to-end logistic supply chain in railway transport within its short corridor, Lagos – Ibadan.

Buhari said that goods to the hinterland would now be transported by rail directly from the Apapa port Quayside straight to the Inland Container Depot located in Ibadan from where it can be distributed to other parts of the country.

He said that in clear recognition of the challenges posed to our economic growth by absence of strong and effective infrastructure, the government had embarked on the completion of the outstanding segment of the Lagos – Kano railway, which was Ibadan – Kano.

He said that the Lagos – Kano railway project when completed would link the Kano – Maradi line at Kano and a rail link from the Nigeria southern ports of Lagos to Maradi in Niger Republic would be achieved.

Buhari commended the Minister of Transportation, Rotimi Amaechi, and management of Railway Corporation for their drive and tenacity to achieve the milestone recorded on Thursday.

Amaechi, said that this was the third time President Buhari would be commissioning standard gauge railway.

“Why I want the President to be present to show Nigeria that the project started and ended by our administration.

“I even lost my car as a result of entering the bushes to get the project done.

“I sincerely appreciated Lagos, Ogun and Oyo states government. We also appreciated Governor Amosun who allowed us to demolished one thousand houses.

“I will like to appreciate all staff of railway, journalists, CCECC, security agencies among others.”

In his welcome address, the Board Chairman of the Nigerian Railway Corporation, Alhaji Ibrahim Alhassan, said elected representatives had supported the standards gauge railway to be successful.

Alhassan commended the efforts of Federal and state governments and some agencies for their support in making the project achievable.

The Chairman of Chinese Civil Engineering Construction Corporation (CCECC), Jiang Yigao, commended Nigeria and other government officials for giving support to enable them to deliver within the time frame. 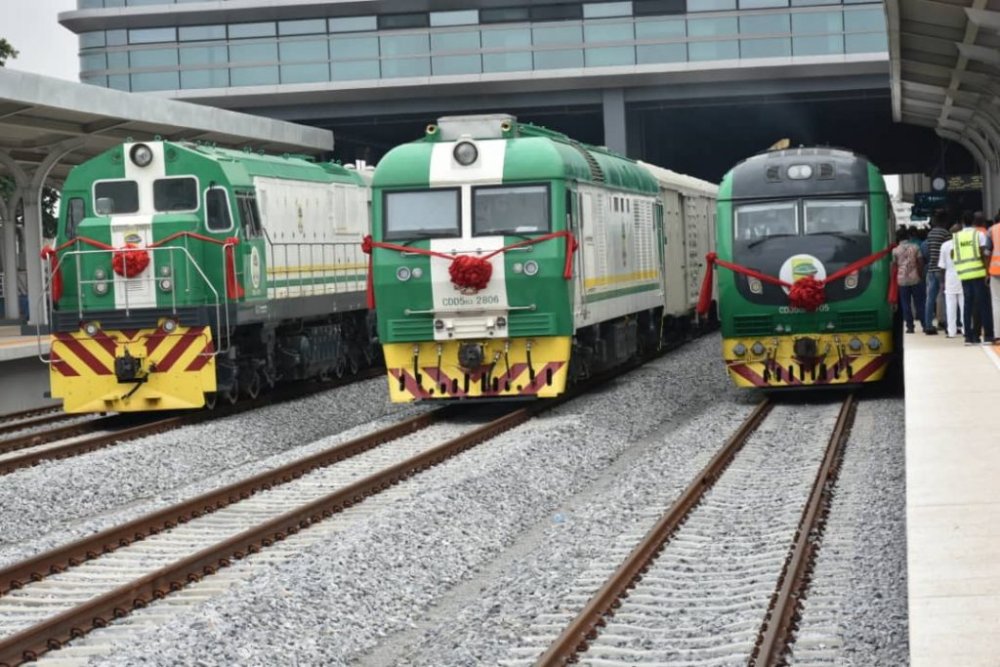 He said that the standard gauge railway would increase development in Nigeria and assist in improving social and economic development in the country.

The Ambassador Extraordinary and Plenipotentiary of People’s Republic of China, Cui Jianchun, congratulated Nigeria’s government saying that the inauguration of the project had further streghtened the relationship of the two nations.

“I am very delighted to join all to celebrate this event. For every nation, development is key. This project with the China support will improve development of this country.

“The ceremony is not for transportation of people and goods, but also about railway to improve the lives of Nigerians.

“I commend the effort of the Hon Rotimi Amaechi without him we could not stand here this morning.

“We are continuing in working together for sincerity to enable Nigeria to overcome challenges both National and Internationally, ” Jianchun said.

Sanwo-Olu said that it was better when both the Federal and state governments collaborate to achieve development in the country.

“Today we can look back that the collective infrastructure and support were not in vain while three states Lagos Ogun and Oyo have benefited from this project.

“We have a revolutionary project taking place in Lagos, we are also building foundation that the Federal had laid for us.

“We are building Blue and Red six standards rail with the support from the Federal Government through the Lagos State Metropolitan Area Transport Authority (LAMATA).”

The Managing Director of the Nigerian Railway Corporation (NRC) Fidet Okhiria, said that after the flag off, full operation would start and the corporation would increase the train to four and also commence the freight operations from Lagos ports.

“We are staring on Monday with four train two up, two down, and in six months time will be running eight train, four up, four down.

“With the operation of the freight, we will be moving goods out of the ports through the Standard and the narrow gauge which will go a long way in decongesting the port.”