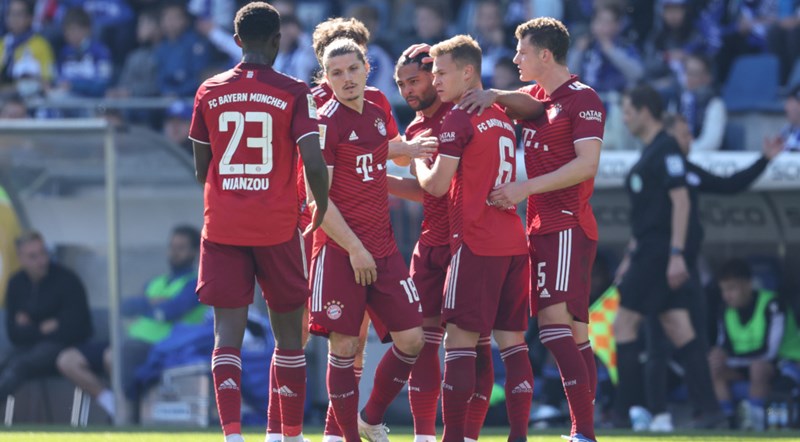 Bayern Munich are closer to their 10th straight Bundesliga title next weekend after they bounced back from their Champions League exit with a 3-0 win at Arminia Bielefeld on Sunday.

"A bit of frustration was released after we were knocked out," Gnabry said.

Bayern returned to winning ways five days after conceding a last-gasp equaliser at home to Villarreal to crash out of the Champions League with a 2-1 aggregate defeat in the quarterfinals.

"I've had a hard time dealing with it," Bayern midfielder Joshua Kimmich, who was outstanding Sunday, said.

"It's still in the back of your mind."

There are four league games left but Bayern can secure the title by beating second-placed Borussia Dortmund in next Saturday's top-of-the-table clash in Munich.

"We definitely want to clinch it against Dortmund," Kimmich added.

Bayern were ahead after less than 10 minutes in Bielefeld when a Kimmich pass found its way to Robert Lewandowski, who got a touch before Laursen helped it over the line.

Bayern had a let-off when Japan midfielder Masaya Okugawa clipped the ball over Dayot Upamecano before firing past Manuel Neuer, but the goal was ruled offside.

Just before half-time, Bielefeld midfielder Fabian Kunze was stretchered off after being elbowed in the head by Bayern's Tanguy Nianzou, who was booked for the challenge.

It was Bielefeld's third worrying head injury in recent weeks.

In the seventh minute of first-half stoppage time, Bayern doubled their lead when Gnabry got on the end of another Kimmich pass to tap home.

Bielefeld kept searching for a goal to get back into the game after the break, but Bayern substitute Musiala secured the points with a late third.