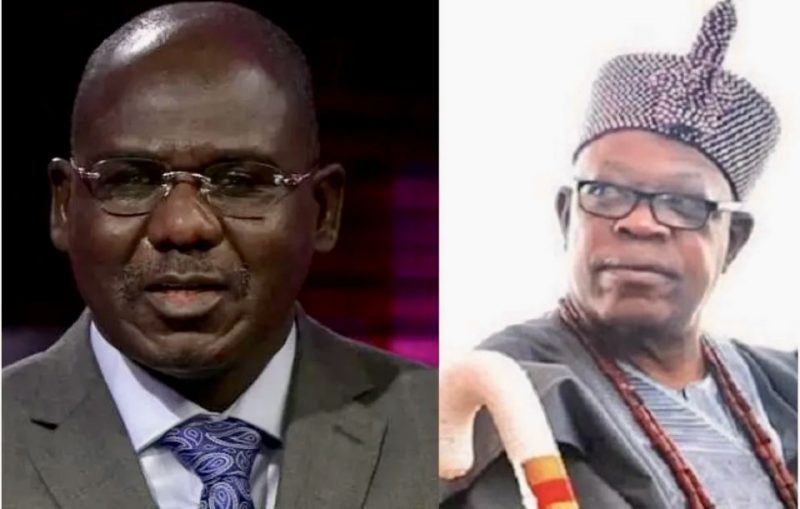 The former Chief of Army Staff, Lieutenant General Tukur Buratai (retd.), has pledged loyalty and support to the Olubadan and the ancient city of Ibadan.

Buratai made this known on Sunday when he paid a congratulatory visit to the 42nd Olubadan of Ibadanland, Oba Lekan Balogun,

Buratai, who is the Nigerian Ambassador to the Republic of Benin was present when Oba Balogun was presented with the Staff of Office by the Oyo State Governor, Seyi Makinde.

The former army boss described Oba Balogun as a person “whose name and personality preceded his enthronement as the Olubadan owing to his philanthropic gestures, detribalized posture, politics, and activism.

“The enthronement of Dr. Balogun as the new Olubadan is a well-deserved one for he has always been a man of honor with good poise and carriage that befits royalty. It is a divine call for you, Kabiyesi and you will always be divinely guided as you direct the affairs of Ibadan people, among whom I’m one as one of your Chief.

“I will remain a loyal chief to the monarch and Ibadanland by answering duties as the Aare Akinrogun of the ancient metropolis anytime the need arises.”

The monarch, while speaking through his brother, Senator Kola Balogun, said he would hold periodic meetings with all Ibadan chieftaincy titleholders from across the country.

He said the periodic meetings could either be once or twice a year to wine and dine together and ensure that the relationship between Ibadan and her chiefs is kept alive and active.

Olubadan, who described Buratai who was the Chief of Army Staff when he became the Aare Akinrogun of Ibadanland as a dedicated and loyal army general, said his appointment as an Ibadan Chief was not a mistake.